Posted on December 4, 2015 by apocalypedia 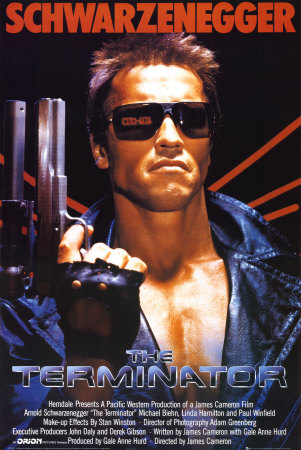 You’ve heard this one before.

The future isn’t what you’re expecting.

There will come a day when all you know will come to an abrupt end.

And there will be lasers, and robots, and carpets of human skulls paving the very ground you tread.

Once upon a time, in the 1980’s, there was a City. This City was filthy, but it was also full of promise. It was here that humanity was able to reach its absolute apex. It was here that humanity created the very thing that would kill it. But it was also here, Los Angeles, where humanity created its own salvation. Skynet, the self-aware computer that controls the machines, rained down nuclear destruction. John Connor, survivor and leader of men, is the only one who can destroy the mind of the machines. This is a story about neither of these. This is a story about their champions. This is a story about single combat for the hand of the Lady Fair, Sarah Connor, mother of humanity. For the machines, The Terminator. Cybernetic organism, programmed to kill, and really excellent at it. For humanity, Kyle Reese. Soldier of the future, commanded to protect, kind of bad at it, but at least it turns out Sarah Connor is pretty good at self-preservation (once she gets past a bad case of the stupids, that is). The Terminator is a story of survival, but it is not a story of Good versus Evil. It is a story of man versus machine. Creator versus created. It is a story of human hope, ingenuity, and hubris. It is a bleak, brutal, and oppressive tale. And it is also great. 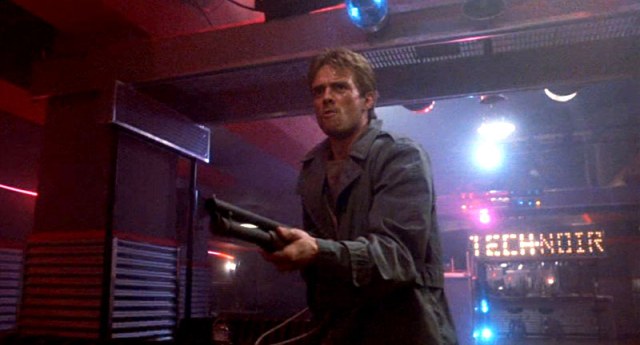 Kyle the Virgin Soldier has HAD IT with your loose 80’s morals, L.A.

James Cameron isn’t subtle. The Terminator begins with a brief, feverish glimpse of a terrible future. The sky is the black of permanent night, the ground is a mix of shattered machines and broken skulls. In between are the glimmering sliver hulks of automated death machines and their grimy desolate human counterparts warring for supremacy in the charred husk of the city. Then an abrupt segue to heavy modern machinery. Cameron’s interest in the heavy machines of the age, from garbage trucks to construction vehicles, is paramount throughout the film. The through-line seems clear: first come the trucks, then come the computers, then come the kill-bots. While this seems a bit heavy handed in retrospect (as when Kyle Reese falls asleep and has flashback dreams about battling Hunter-Killers and wakes up to construction machinery), this dedication to juxtaposing the grim future of intelligent machines with the dumb heavy monsters of today is earned by the rest of the atmosphere Cameron is able to create.

Los Angeles is gross. No one denies this. It is a city built in a desert and comprised entirely of concrete, asphalt, and stucco. Of course, like any concentration of humanity, there is another side. Los Angeles is also a massive hub of creative energy. Even once you concede that much of this energy is misspent and empty, it is still there, still present, and still worth preserving. The city itself can even be beautiful, on long summer evenings as the sun glints off golden hills and the glimmering lights of the valley seem to roll on forever. James Cameron shows us none of this. The Los Angeles of The Terminator is desolate, haggard, and filthy. Heaps of trash blow around dark, grim alleys. Buildings have fallen into disrepair and darkness. The streets are slick with the filth and run-down detritus of this post-modern city in decay. I’m laying it on a bit thick here, but it’s all there on the screen. Even when the sun comes up, what we’re shown is downright unpleasant. Anonymous dreary suburbs and nasty small-minded diners. Dim witted party people and, my god, all of that wood paneling. At no point during this film are we given a reason why we should be sorry this place is annihilated by nuclear fire. As far as Cameron is concerned, it would be a righteous cleansing.

This view, the glorious, inevitable destruction of petty civilization, is reinforced both within this film itself and of course in the sequel. Over the course of the film we are given a fair amount of exposition, mostly in the form of Kyle Reese breathlessly trying to explain the importance of escaping the unstoppable death machine to an incredibly slow Sarah Connor. It boils down easily. There is a coming war. One man may save us. You must live so that we can survive. That’s pretty much it. By the end of the movie, The Terminator is destroyed (by the aforementioned dumb, heavy machinery, because of course it is), but all its destruction means is that the future is determined. War is coming. The near extinction of humanity is coming. Look at this goddamn city you people have built, of course this future is inevitable. Furthermore, there doesn’t seem to be much worth saving. What are we shown? Parking garages and police stations. Warrens of concrete and shadows. Mazes of cubicles and soft men. No, better to blow it all up.

While it is made emphatically clear that the modern world humanity has created is a tremendously awful place, the blame for this is placed on our reliance on machines. We’re given a few human moments of emotion to reflect on between all the mechanized killing sprees. Reese the sad-sack virgin longing for Sarah, a few light moments between the doomed lovers later on… I guess that’s about it, but Kyle Reese seems pretty keen on John Connor, the unborn son. He’s the unseen avatar for human righteousness. He’s the resourceful, inspirational leader of men who represents humanity’s best qualities and is therefore our last hope to reconcile our fatal mistake of giving over our independence to the machines. I mean, he’s Jesus, right? J.C. the Redeemer. Again, Cameron is not subtle. However, he doesn’t need to be since as a nihilistic parable of modern existence it doesn’t get much better.

I wish this wasn’t a series but it is: Judgement Day; Rise of the Machines; Salvation; Genisys