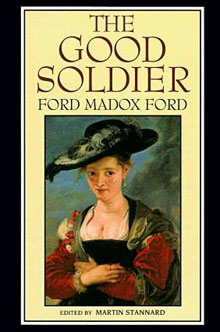 A couple of years ago I read through old Ford Ford’s masterwork, Parade’s End, and it rather reignited my love of Modernism. Those novels, of which there are four, tell the story of a stodgy conservative weirdo who has his world view burned to ashes by World War I. He eventually learns to let go the past and how things used to be and attempts to live his best life. For Modernism, it’s surprisingly heartening. Also, I’m still in love with Valentine Wannop. What makes Parade’s End special is the characters, as they are stronger and richer than most of the others you’ll find wandering sadly through the halls of Modernism. The other thing about Ford’s writing is its experimental structure. Parade’s End is four novels, even though it probably doesn’t need to be, which are fractured and scattered through time and various viewpoints. The story can be hard to string together sometimes, and while it never goes Full Joyce and embraces stream-of-consciousness, it does flirt with it. I would argue that with Parade’s End, Ford masters the balance between experimental form and readability. The book we’re talking about today, The Good Soldier, is an earlier attempt at this.

It’s not as good. The key difference is that The Good Soldier is far more interested in technique than it is in story. And to be fair, the technique is genius in concept and masterful in execution. The thing is, Parade’s End is a further refinement of the work done here, plus it also has a story worth caring about. The story in The Good Soldier is as Basic Modernism as you can get. You’ve got your clueless upper class dealing with the inevitable end of their lifestyle thanks to War and Progress. All the characters suck in their own special way, and there’s no delightful Miss Wannop to save it. Plus the principal conflict here is straight up a soap opera plot. Still, there are no shortage of critics out there who would assert that The Good Soldier is actually Ford’s defining work. Hell, the Norton Critical Edition I have here is more than half dedicated to deconstructions of the manuscript and various critical essays. And that’s fine. They just prioritize the importance of Ford’s style over the actual story.

Look at the faces on these covers and remember that one of the novel’s subtitles is “A Tale of Passion.”

The Good Soldier is about two married couples, one American, one British, both rich. On the surface they are tranquil and aloof, exactly as you’d expect the idle rich to be. Dig a little deeper, and it turns out they’re extremely dysfunctional. Captain Edward Ashburnham and his wife, Leonora, have their troubles. Dowell and his wife, Florence, have theirs. It’s not much of a spoiler to say that Captain Ashburnham has problems keeping it in his pants, as does Florence. The novel is entirely told from Dowell’s point of view, so from one aspect The Good Soldier is a novel about infidelity told from the perspective of a wronged husband. Of course, this is Modernism, so there’s layers here. Social layers, certainly, but also personal ones. And this is where Ford’s experimental genius kicks in. The only thing that makes this otherwise tawdry story about various extramarital affairs interesting is what Ford is doing with narration.

The novel works in layers, as page by page and chapter by chapter Dowell tells his story. It is told naturally, by someone who is trying to reconstruct a decade’s worth of memories through the lens of personal betrayal and loss. Make no mistake, that’s an incredibly delicate and subtle line to take when narrating a story. Ford succeeds in this attempt, which is why there are a hundred pages of critical essays in the back of my copy of the book. Most of those essays are concerned with Ford’s ability to present Dowell’s account of his life in a fashion that almost exactly mimics what his poor, sad, wobbly mind would realistically be like. To say that Dowell is an unreliable narrator cheapens the skill involved in bringing that unreliability to life, especially in 1915. That’s Moderns for you, though. Out there making it new. 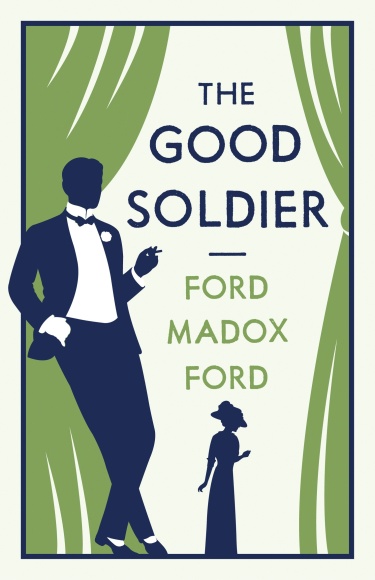 I’m trying to think of a fun way to accurately describe just what it is that Ford doing that makes it special as opposed to a gimmick. Honestly, finding a fun way to describe boring lit stuff is a kind of my whole deal. I mostly image The Good Soldier unfolding as a series of “well, actually” statements, in which Dowell is constantly revising his own story as be slowly becomes more honest with himself. The first version of himself and his friends the Ashburnhams is almost completely benign. We’re just good people who stay out of trouble and uphold social standards and are absolutely and totally unremarkable in any way. Then I like to imagine someone standing outside of Dowell’s doorway leaning in and going “really, bro?” To which Dowell has to circle back and correct his own memories. Over and over again.

There’s a deterioration of decorum that happens over the course of the novel that I quite enjoy. That’s a big part of the process, in that Dowell begins his account by providing a description of the major players which would match what the typical outsider would see. That is to say, extremely dull rich people. Yet little by little, as Dowell suddenly remembers minor details like how his wife Florence had a painfully obvious affair with some grimy doofus for two years, the tone shifts. We’re basically watching Dowell’s defense mechanisms collapse in real time. He starts out thinking hey, maybe Florence isn’t so bad. Then he remembers things like, hey, is it weird she wouldn’t allow me in her room ever and that skeezy Jimmy dude is always in there also he lives with us I guess? Must be her heart issue that’s only ever an issue when it’s convenient to keep me docile… heeeeey, wait a minute. I think she might actually be kind of a liar! Well I never. By the end of the novel he’s at least finally come to terms with how awful a person Florence actually was.

Of course, the other subtitle for the novel is “The Saddest Story,” so pick a lane, Ford.

Of course Dowell himself isn’t great, although given his own testimony he comes off mostly as a tepid pushover throughout the story. Again, it’s the defense mechanism of a shiftless rich man to simply detach from any kind of internal turmoil. Over and over he yearns for a simple existence. Like look, I don’t have to work, I don’t want to work, I just want to hang out and play polo. Women are too much trouble to really bother with, and if we could just do the same thing every day that would be great. Florence, obviously, has her idea of a good time. Meanwhile, the good solider himself, Edward Ashburnham, is the kind of hopeless romantic who allows his pure-hearted romanticism to run roughshod over his marriage and every relationship he’s ever had. In 2019 terms he’s the dude who claims to be a feminist ally while actually being a serial womanizer. He’s gross and everyone knows he’s gross except for the vulnerable young women he exploits and Dowell.

So far, so Modernism. Tragic, filled with unsympathetic characters, written in a new and exciting way. But what of the other thing? The ever-present shadow of apocalyptic global warfare? For a book entitled The Good Soldier, World War I is just that, a shadow. Ashburnham is a professional soldier, but doesn’t live to see the war. The novel, of course, was published just as the nightmare was really getting going. For the most part, The Good Soldier is a portrait of the sordid inner lives of high-society jerks who don’t realize their whole way of life is about to be terminally fractured. Of course, that’s where Parade’s End comes along. However, the brink is there even if this group of characters are so mired in their own tawdry soap opera of a life that they don’t see it coming.