Sometimes I lose my drive to find and read fun new things. It takes effort, man. I’ve got to think about what kind of thing I want to read. Then I have to figure out what kind of books are going to offer what I’m looking for. Then I have to try and find which of those books are any good. Then I have to go and locate a copy. Then I have to actually read the thing and if I’m lucky it clicks with me and I can finally enjoy it. Ugh, such a burden. Alternatively, I can hunt through my own piles of books at home and dig up one of the old paperbacks from the early 90s I still have and read that for the six hundredth time. The last one was Jurassic Park, which I breezed through in a day. This one took a little longer, but sometimes my desire to read anything just ebbs. To be fair, though, Four Past Midnight is a collection of four novellas that clocks in at near 800 pages. Anyway, all four of the stories on offer here are decent Stephen King yarns, although it would be hard to argue that any of them are top-tier. The Langoliers is probably the best of the lot, mostly because the concept is so weird.

When I was a kid, I was fascinated by weird shit. Shocking, I know. But I moved through all kinds of phases – Bigfoot and aliens and JFK conspiracies – if it was on Unsolved Mysteries, it was entirely my thing. So of course I was well versed on the Bermuda Triangle (Elvis needs boats!) and other mysterious disappearances, specifically the two referenced in this story, the Lost Colony of Roanoke and the abandoned ship the Mary Celeste. I couldn’t tell you what twelve-year-old me thought might have happened to cause those things, but it most assuredly involved aliens. Or maybe interdimensional beings of unimaginable power. Regardless, I found those things fascinating and a lot of fun. I never really believed any of the more far-fetched things, but like any preteen with a decent imagination, I sure did try. Anyway, since I was also obsessed with Stephen King, it was natural I would stumble onto Four Past Midnight and was particularly taken with The Langoliers.

Oh right, the actual story. There’s this plane, right? It’s a redeye flight from LAX to Logan, gross, but whatever it’s a pretty full flight. Our first character is an airline captain whose ex-wife has just died. He’s exhausted, so he falls asleep pretty much right away. Also on this flight is a little blind girl who is going to Boston to have surgery on her peepers. So she can watch, presumably. Anyway, she also falls asleep right way, but then awakens some time later to a completely empty plane. It soon transpires that she is not alone. There’s a handful of other passengers still intact, but somewhere, someway, the vast majority of people on the plane have simply vanished, leaving their personal effects behind. After everyone freaks out for a bit, the (extremely coincidental) airline captain lands the plane in Bangor, Maine, because Stephen King, and then things get strange. The story works mostly on the strength of the evolving mystery of the disappearance, but also because King characters are almost always compelling, even when they’re written in a broad and pulpy manner.

Yet another on the long list of fucking rad-as-hell foreign book covers.

So far, I’ve not actually talked all that much about the story, mostly because there’s not all that much story to talk about. And that’s fine! Really, though, my favorite bits of The Langoliers are when the characters slowly but surely figure out what’s going on and how to fix it. I’m not the type of person who derives enjoyment out of solving a mystery before the characters. Like, I will actively shut that part of my brain down so I can draw the process of a smartly revealed plot out as long as possible. I think this is in large part because I suck at writing plots myself. Characterization, dialogue, descriptions, okay sure. I can do those, I will even humbly suggest that I’m not terrible at it. Plotting and large-scale world-building, though? Straight awful. Which is not exactly helpful when one is attempting to write a dang fantasy novel. Anyway, I mostly bring this up because while King is better at characters than plots, he can still do it.

Everything about The Langoliers is highly unlikely, from the overall concept down to the random chance of this particular band of characters managing to survive the disappearance. Once you accept that, and you should because it’s a story, everything else is just letting King explain his weird idea, which is that the “past” does not exist. There is only the current moment, and on either side an un-lived in physical world that either waits for the present to arrive or the past, which waits to be destroyed. Our survivors find themselves transported a short time into the past, where the vibrancy of the world is quickly waning. Eventually, the Langoliers show up, and they’re basically mystical munch-balls that mindlessly devour the physical world. That’s weird, but intriguing! For this idea to work, the characters need to process through the idea slowly, which they do by a mixture of hypothesizing and experimentation. Those are the bits that I like. Sure, what are the odds that a mystery writer would be among the survivors, especially one who would give a sci-fi premise the time of day? But whatever, it’s still a fun process. 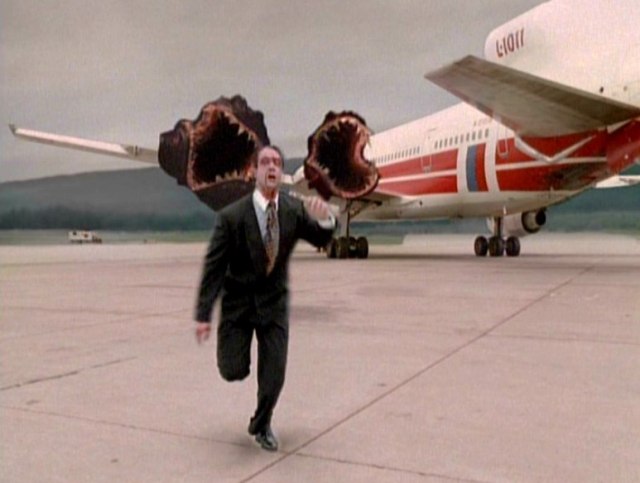 If you’ve got a hankering for incredibly bad mid-90s CGI, look no further than Bronson Pinchot running away from these rough CG inserts.

Oh, and lest I forget, remember that 1995-ass miniseries they made based on this? Well you can totally watch it on Youtube. I don’t recommend it. I skimmed through it, mostly for nostalgia’s sake, and for the life of me I can’t figure out why anyone thought an adaptation of this needed to be any more than 90 minutes long. Although casting fuckin’ Balki from Perfect Strangers as the deranged Craig Toomy was an inspired choice. Also I like the King cameo as Toomy’s mean dad. I guess I don’t have a ton more to say about The Langoliers. It fits in nicely alongside The Mist as a weird idea that probably doesn’t merit an entire novel but is still pulpy and fun. I probably would have liked it just as much if the Toomy character didn’t exist at all, but it’s King, some people need to die. Plus, it’s a good example of a single characteristic doing a lot of work with a character. Tearing paper into little strips is real weird, but it conveys a lot with a little bit of space. And then imagine that, but with Balki. Man, they should have figured out how to cast Urkel and Uncle Joey in this thing, make a whole theme out of it.