I can’t believe I’m saying this, but I think I’m nearing the end of my desire to play more Fallout games. At the very least, I am of the firm conviction that Bethesda needs to mix their shit up because I don’t know that I can do this again. Of course, almost as if to mock me, Fallout 76 was just announced and boy is that not the kind of game I’m into. Still. It’s Bethesda trying something new and different, opening up the kind of game they make, and the simultaneous announcement of both a new I.P. and a new Elder Scrolls in the somewhat distant future ensures that they’re not giving up on the massive single player experience. Which is what I like because who needs other humans? That said, my hope for those two new games is that they change up the formula. It’s not my place to tell them how to do that, but I just played through Fallout 3 again and boy, it was a lot more tedious than I remembered. Perhaps that’s because I basically played it the same was as I did ten years ago (!!!), and so the story played out basically the same way. I don’t think that’s it, though. I’m not sure what it is, so let’s figure it out.

Fallout 3, if you’re not familiar, is a game set 200-some-odd years after a nuclear apocalypse destroyed civilization. In other words, the exact kind of thing I like. You play the Vault Dweller, which is a character that you kinda-create. As ever, my character is a smart, sneaky, resourceful young woman named Jillian. The game begins with Jillian’s birth, which is the game’s clever way of choosing your starting stats and whatnot. You’re born in a Vault, a secure, self-contained underground location that survived the nuclear war. However, all is not well within the Vault. Your dad is a bit of a troublemaker, it seems, and is in conflict with the Overseer, who is desperate to keep the doors to the outside world closed and his power in effect. Well, the game truly begins when you discover that your dad has left and the Overseer is cracking down on dissent. Fallout 3 has a morality system, dubbed “Karma,” so you can basically choose how things play out from this point. Your bestie is the daughter of the Overseer and she wants to help you escape. Do so without violence, and she’s cool. Kill her dad and she’s less so. Regardless, if you want to continue with the game, you must leave the Vault and enter the Capital Wasteland. 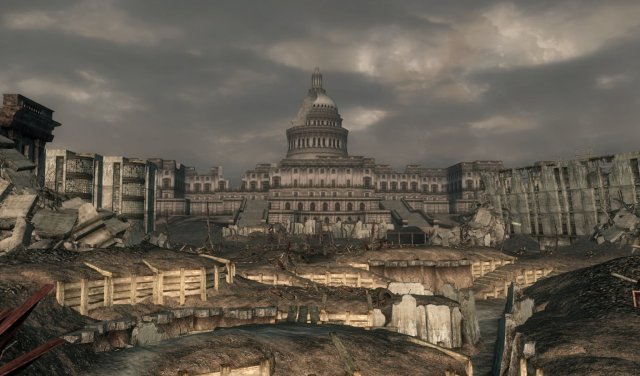 Grey: The Game. To be fair, there’s a little sickly yellow and beige as, like, accent colors.

In 2008, that was an incredible moment. Yes, it was basically the same moment as 2006’s Oblivion, in which your character emerges from a sewer into an enormous open world, but whatever. It’s impressive. Hell, it was still impressive last time out in Fallout 4. You step out of your hidey hole and there’s a lens flare and a huge world sprawled out before you. And of course as the player you know that thing is all for you to roam around in. It’s the “see that mountain you can walk there” moment, and it still has power. Here’s the thing, though: That moment is only as good as the world the game delivers. Relax, Fallout delivers an amazing world that I love, and in 2008 this game was fucking mind blowing. I mean, unless you’re a Fallout 1&2 purist and you’re mad that these games aren’t isometric tactics games, in which case the world has moved on and yo, those games still exist. Still, this last playthrough was instructive as to why Fallout 4 didn’t quite feel right. There is a lot of repetition in the world design, from the complete and utter lack of color to the look and feel of the various locations down to the seven songs on the radio.

Let’s just face it, this game is incredibly grey. Yes, I get it, it’s a nuclear wasteland. Still, both outside and inside, everything is just shades of grey. In all these years nobody has figured out how to paint, apparently. It gets wearisome after a time, especially when paired with some fairly dire navigational choices. Oh, you want to walk around downtown D.C. and explore? Well sucks to be you, because in order to get anywhere you have to travel in an endless array of subway tunnels that all look exactly the same. Nor are these tunnels clearly marked, hell no, you just dip in and trudge through them and pop back on the surface. If you’re lucky, you’re a little closer to where you want to go. More likely, you end up in the complete opposite direction, so it’s right back into the tunnel so you can look for the next identical tunnel to hopefully get you to where you want to go. It’s awful, and I remember hating it when I first played it. Eventually, though, you get to where you’re going and then Fallout 3 is cool again. Which is to say you can get back into the various storylines.

The only character who matters.

There might be a way to finish this article without sounding like a total Negative Nicolas, but it’s probably going to take another paragraph or two of pointed criticism, so we’ll see. This is because the mainline story just didn’t resonate all that much with me. There’s a couple of primary reasons for this. The first is, none of the characters are particularly deep or sympathetic. The game basically hopes you either have a good relationship with your father – or a terrible one – so that the narrative choices your character make resonate within the story. I guess? Look, it’s difficult to craft a story around a character which can run a gamut of actions. Since the moral center of the protagonist is uncertain, the writers have to attempt to figure out what that character is going to do in any given situation. Videogames have progressed a little since 2008, but this is still a tricky story writing issue in the medium. The best versions tend to have a ready-made character that the player can nudge one way or the other, like Captain Shepard in Mass Effect. In Fallout 3, however, most of the character creation is left to the player. And while I enjoy that freedom, the narrative structure suffers for it.

Luckily for the game and the player, then, there are more memorable stories and vignettes within the world of the Capital Wasteland to stumble across. The main story is whatever. It moves you through the world and introduces you to its post-apocalyptic factions and also Three Dog, who is dope. Yet by the end, after you discover your old man’s back story and what happened to your mother and whatnot, none of it really lands, largely because of the reason noted above. You can nobly sacrifice yourself for the betterment of humanity and tbthh, whatevs. However, try being evil for once and go in and nuke Megaton. Now, if you’re like me (and apparently the majority of players) I’m a ridiculous goody-goody when a game gives me a morality spectrum. Yet after I wrapped up my playthrough this go-around, I went back in, created a straight-up doughy serial killer, and set about being evil. I wiped out everyone I could in the starting Vault, then marched straight to Megaton, found that creepy weirdo who gives you the option of blowing up the town, and then did so straight away. And holy shit! You do that for no other reason than because some bored old man could have a laugh. I dunno, I appreciate that kind of chaotic evil from time to time. It was definitely more memorable than the good path, where you haul scrap metal to some goof so he can fix up the water system. Blah.

Just blow it all up.

There’s value to the good path, of course, as it is inherently fun to storm a slaver stronghold and wreck their entire shit up. Also, there are just a ton of flippin’ weirdos out there to find and deal with. All that grey has driven humanity to same strange and upsetting places, let me tell you what. There’s the Republic of Dave, in which some dude has convinced a handful of idiots that he’s some kind of king. There’s that one lady who is obsessed with Nuka-Cola like some kind of even-more-depressing-adult-Disney-weirdo. Also, vampires?! Anyway, the point is there are strange doins going on in the Capital Wasteland and it’s still fun to go and find them. That said, boy, the world still seems pretty sparse. If you look a filled-in map of the world it seems bewildering, but there were times I’d wander around for like an hour and only find a few radscorpions and the occasional boring raider-cave. And while the ritual murder of wasteland pirates is fun and all, the harsh level cap sucks some of that fun out.

I am always going to have a fondness for Fallout 3, regardless if the game itself isn’t as appealing as it may have been ten years ago. That’s fine. Sometime down the line I’m probably going to go back through New Vegas, which if I recall is a better game. It’s brown instead of grey. Regardless, it’s probably the apex of what Bethesda has done with this particular formula. There are ways to go about making a Fallout 5 (in like 2028) that take all the things I love about the concept and world and make it less of a drag. Honestly, Fallout 4 took care of some of the above issues. It’s more colorful, the world is more meaningfully dense, and the progression issues are mostly mitigated. Yet there’s still the roadblock of storytelling, and how to properly integrate a user-created protagonist into the game world. I might consider getting rid of a main quest storyline altogether and focus on a series of interconnected vignettes instead. I’m sure there are other solutions, assuming, of course, that Fallout 76 doesn’t just become the new template of Fallout games. It’s weird, but I’m not sure that would bum me out all that much. I’m a proponent of new ideas and new worlds, and it could very well be time for Fallout to just fade away.