Most of the time, I’m here writing about books and movies which are, by most metrics, incredibly depressing. However you define “apocalypse,” whether it’s the literal end of the world, or a transition in a historical process, or the inevitable decline of civilization, or whatever, it usually includes bad times for a lot of people. If you scroll through the archives I spend a lot of time talking about disasters both real and imagined, the unsustainability of social constructs, ennui and despair, the harsh, eternal reality of universal entropy and the inevitable heat death of the universe. You know, fun stuff. Occasionally, especially if I’ve been on Twitter too much, I need to engage with a more positive worldview. I need to pretend that there’s a possibility of things being okay, that the fundamental mindset of humanity isn’t belligerent self-destruction. This is especially true in 2018, when social discourse seems more mean-spirited that it has been in the past. Like, I understand that most of this is perception born out of the immediate access to a vast social sphere that has been unavailable in the past, but like any other rapidly evolving technology, social media grew too big too quickly and it’s exhausting. Everyone just straight up fucking hates each other, all day every day, and it’s a bummer. 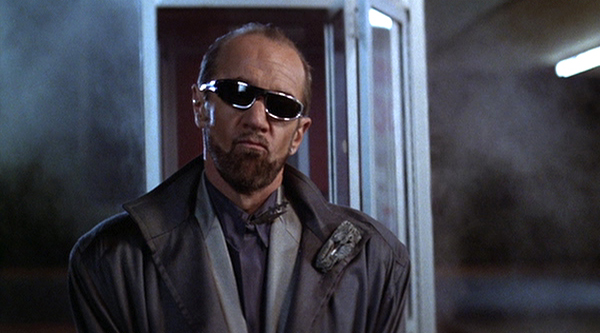 Listen to this guy Rufus, he knows what he’s talking about. Carlin looks like the protagonist to an early-90’s FMV computer game. And I love him.

Which is why I need the reminder that once, in the late 1980’s, Bill and Ted’s Excellent Adventure dared to imagine a world in which people were inclined to be excellent to each other. Now, before we get any further, some disclosure. This movie is on a short list of my very favorite things of all time, so I’m probably going to lean into some hyperbole here. I don’t actually know if it’s a good movie or not. I have no apparatus to actually criticize this film. I’ve been watching it since I was ten, and who knows how many times I’ve seen it. It’s probably not a great movie? But it’s also the best movie. The thing is, Bill and Ted is not exactly an inspired comedy, nor is it a particularly sharp science fiction story. It’s fun, of course, and there’s a pretty obvious message attached, but Bill and Ted’s Excellent Adventure is more of a fantastical view of how the world should be. Everyone in the movie is fundamentally good-hearted, and the motives and actions of the characters are generally pure. The closest thing I can think of, insofar as pure, unadulterated positivity is concerned, would be Adventure Time. Which also happens to be one of my very favorite things, because the world is an exhausting place.

All we are is dust in the wind, dude. Dust. Wind. DUDE. You know what, the writing in this movie is perfect.

It occurs to me, in my oldness, that not everyone knows exactly what Bill and Ted’s Excellent Adventure even is. If you come at it from the point of view of someone with no tangible memories of the 80’s, Bill and Ted is a dated period flick. To a point, that is fair. It is very 80’s. The entire premise of the film is based on the notion that the world will be saved by hair-metal butt rock, after all. That said, how beautiful is that premise? George Carlin is a man from the future, who explains how sick the future is going to be by citing bowling and mini golf scores. Make no mistake, this utopia is firmly rooted in what was cool in the San Fernando Valley in 1989. Bill and Ted, a couple of teenage doofuses, are destined to form a band which will inspire world peace and an eventual utopia. Do not worry about the details. However, this utopia is threatened because Bill and Ted are not very smart and are on the verge of failing their history class, the consequence of which is that Ted will be sent to Alaska by his overbearing father. The solution to this problem is that Carlin’s character, Rufus, arrives with a time machine. You see, in order to pass history, Bill and Ted must cobble together a final presentation to be given the next day. Bill and Ted use the time machine to travel through history and abduct various historical figures and basically force them to talk in their report. It sounds fairly dark when I say it like that. It isn’t.

Rufus is the patron saint of patience.

Everyone loves Bill and Ted pretty much right away. I’m not actually talking about the movie here, although the axiom holds true for good-hearted, right-thinking citizens of the world. No, within the world of the film itself, nearly every character likes Bill and Ted. The sole exception is Ted’s dad, who is as close as we get to a villain, and even he is acting out of a place of love and concern for his son. Other than that, parents, teachers, fellow students, and most importantly every single historical figure, immediately bond with Bill and Ted. Upon watching the movie for approximately the forty millionth time, people’s reaction to these lovable goofballs is the most striking aspect of the movie. These two guys never demand anything of anyone, yet pretty much anyone would do anything to help them out. And please, feel free to write your angry screed against white male privilege and set it on fire, because Bill and Ted never expect people to do their bidding. They go into the entire adventure expecting to fail most egregiously, and are legitimately surprised when the means of their success falls into their laps. No, Bill and Ted find help and loyalty wherever they go because they are fundamentally kind and accepting. That’s literally it.

The corn dog is a nice touch. Geek.

I mentioned above that Bill and Ted’s Excellent Adventure is not an inspired comedy, and while from the perspective of someone who did not grow up with this movie that’s probably true, it is equally true that the film’s comedy is subtle and tonally perfect. Bill and Ted introducing “Bob” Ghengis Khan and Socrates “Johnson” to Missy makes me laugh every time. You also have heard the catch phrases born from this movie your entire life, whether or not you’ve seen it. “Strange things are afoot at the Circle K” gets trotted out literally every time something weird happens or you’re not a real American. By the same token, the film’s central philosophy is “be excellent to each other,” and if you need another mantra to live by you’re doing life wrong. It’s that ethos which lends authenticity to the comedy. Bill and Ted doesn’t punch down. It doesn’t punch up. It doesn’t punch anywhere. No punching! It’s a film which asks why we can’t just all be cool and have fun and spend the day at Water Loops, you know? The meanest thing that happens in the movie is when Ted’s little brother ditches Napoleon, because “he’s a dick.” Even then, Napoleon is immediately redeemed because water slides bring the best out of everyone.

Your stepmom is cute though. Remember when she was a senior and we were freshmen? Missy made me feel things as a kid, you guys.

Obviously Bill and Ted’s Excellent Adventure is a cotton candy fantasy which imagines an idealistic, picturesque version of America that has never existed and never will. I made an error above, when I talked about the film’s meanest moment, but that’s indicative of how the real world changes and Bill and Ted’s San Dimas never does. There’s a point in the middle where Bill thinks Ted is dead and he’s totally not. They hug each other, because obviously they’re the best friends to have ever existed and love each other. Then they part and call each other a fag. That was worth a chuckle in 1989 but feels grossly out of place in 2018. The only thing I would say about that is this: if you went into the world of the movie and told Bill and Ted that word bums people out, they would never use it again. I am as certain of that as I am of gravity, because all Bill and Ted want to do is allow people to be happy and love each other. The whole point of Wyld Stallyns is to unite the world under a banner of acceptance and joy and, of course, a deep unabated love of rippin’, shreddin’ guitar solos. Party on, dudes.