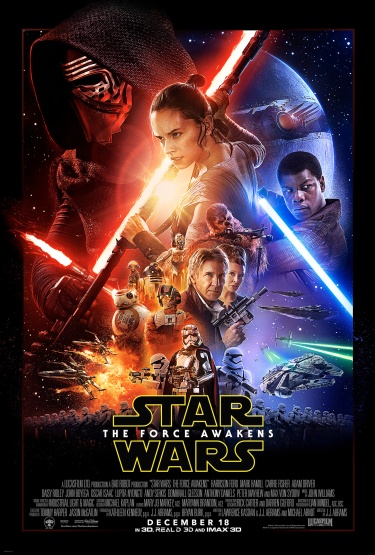 Well good job, Rogue One, you went and made me watch the rest of the new movies. I held out for a long time, for reasons stated in other articles, but here we are and it turns out, Star Wars is still all right. As a lapsed fan, I’ve come around, and can now enjoy these movies for what they are. And what are they? They’re bright and flashy action-adventure movies set in an iconic universe which is as deep or as shallow as your imagination wants it to be. That’s what Star Wars has always been. I’m not sure it counts as an epiphany or revelation, and I’ll definitely get into it a bit more when I defend The Last Jedi, but I’ve come to understand what is appealing about Star Wars in general. When I was a kid, it was a fertile universe for my imagination. In my twenties, when the prequels were hitting, it was my first real blast of nostalgia. Now, an uncomfortable amount of years later, they’re just fun movies I don’t have to spend too much time thinking about. The set pieces are cutting edge and amazing, like they always have been. The characters are broadly drawn but compelling, just like they always have been. The tone is fairly light, just it always has been. Turns out, J.J. Abrams has a pretty good idea of what is appealing about Star Wars. He certainly has a better handle on it than why people enjoy Star Trek.

So, The Force Awakens, three years later. Personally, I liked Rogue One better, because it felt newer than this film, which deliberately draws parallels to the original trilogy in order to smooth over any residual bitterness left over from the prequel trilogy. Damn there’s a lot of these fucking movies. This franchise is endless. Anyway, I still like the movie. Better than A New Hope, even, which might sound like blasphemy, but The Force Awakens gets off to a better start. Plus we already know about the universe and the major players in it, we’re familiar with the history, so it doesn’t have to do any of the legwork that first film had to do. Of course, there’s still some groundwork which needs to be laid down. There’s exposition needed to help us understand what’s been going on since 1983, or whatever the equivalent date system is in the Star Wars universe. Even more importantly, we’ve got these new characters to deal with. 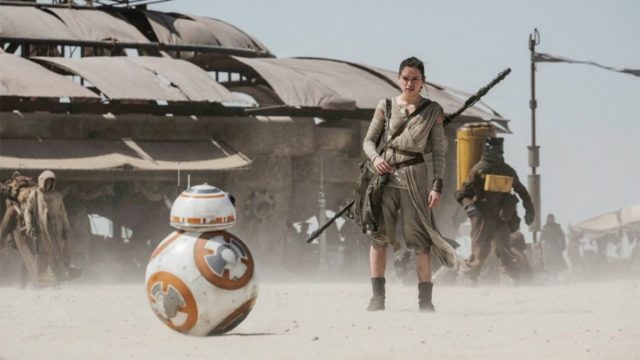 That droid could buy you so many power converters.

It’s a good thing that the new additions are all great characters. Actually, allow me to rephrase that. The new additions are great Star Wars characters. That’s not intended as in insult, either, because Star Wars is a particular kind of story. Star Wars characters need to be broadly drawn – heroes or villains or scoundrels – while at the same time retaining a relatable humanity about them an audience can connect with. They need to have a clear background, but we can’t spend a million years dwelling on that background. They need to have a clear motivation and a clear goal, even if that goal is little other than “save the day” or “ruin everyone’s shit all up.” So here comes our new characters. Our primary hero is Rey, an otherwise unassuming young scavenger who spends her days trying to survive while patiently waiting for… something or someone to come back to her. Our primary villain is Kylo Ren, who really wants to be as rad as Darth Vader and never will be. We got our hotshot pilot, Poe, who has problems with authority and an extremely marketable droid, BB-8. There’s also Finn, a stormtrooper with a heart of gold who would like nothing more than to get away from the not-Empire, the First Order. Okay, let’s get into it. 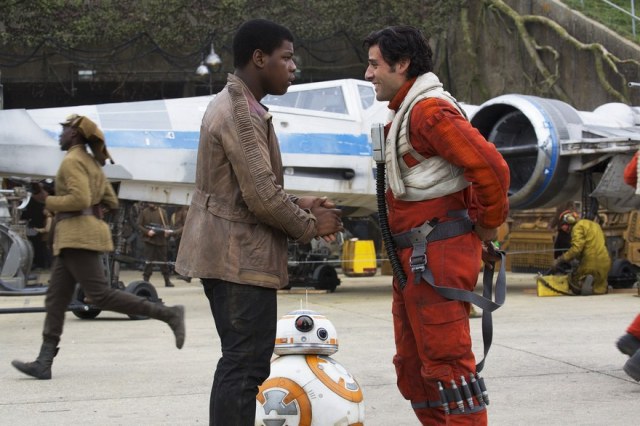 And here, with Finn and Poe, we have the true beating heart of the entire story. Poor BB-8, looking all forlorn, knowing Poe is lost.

The opening of The Force Awakens gives off some heavy New Hope vibes, and I’m sure this is a deliberate choice to ease old fans back into the groove of the original trilogy. I mean, we’ve got an adorable droid who has a top secret message and a scuzzy desert backwater town featuring exactly one redeemable human being who also happens to be our hero. That said, there are additions and layers and callbacks present which successfully differentiate from the previous movies. Finn in particular is an excellent addition to the formula. For whatever reason, his stromtrooper conditioning didn’t work and he grew a conscience and an individual personality. When it comes time to slaughter innocent civilians, as a stormtrooper is wont to do, he refuses. Shortly thereafter, he takes the first opportunity to hitch a ride with Poe to get the hell up out of Dodge. When that goes bad, he hitches his wagon to Rey, who has her own issues she’s working with. This is all 400% more tolerable than whiny-baby Luke in A New Hope, by the way. Rey and Finn have no discernable relationship with previous characters, but both are still established here with these early interactions. Finn is conflicted between wanting to run the fuck away and the desire to do right. Likewise, Rey is a hopeless romantic who keeps herself going with the fantasy that her parents are going to return to her and is faced with the chance to make a difference. Honestly, we don’t need a whole lot more going forward, you know?

The Force Awakens is still a sequel, however, and so it’s not too terribly long before old characters show up and start giving us some exposition to fill in the 32 years which have passed since the Empire expired in Return of the Jedi. It apparently didn’t take too long for a new baddie to show up, even though the movies don’t really get into the origins of Sith-Gollum, or whatever the hell Snoke is supposed to be. So while the Empire may have been defeated, here comes the First Order with pretty much the exact same infrastructure and a weird planet-gun what shoots star-juice and can explode planets up just like the Death Star but like, bigger. That’s all… a little disappointing. Still, Kylo Ren manages to redeem some of the menace I personally didn’t feel much with the New Order. He’s the son of Han and Leia, and is an extremely powerful Force user. Unfortunately, he’s pretty well tipped over the Dark Side, which is a bummer for the various heroes. Probably the best thing the movie does with him is to successfully set up his massive inferiority complex. Of course nothing these new films could come up with will ever be as iconic and awesome as Darth Vader. It’s impossible. So here comes Kylo Ren, with a lame helmet and dopey outfit, and of course he’s trying as hard as he can to be as cool as his grandfather. And of course he never will be.

The point of The Force Awakens is to thwart the First Order by tracking down Luke Skywalker and getting him to unleash his sick Jedi powers to save the day. The beach ball droid has the missing bit of map, which will serve to point the way to where Luke has been holed up for years. The reasons Luke bailed are explained in greater depth in the next movie, but suffice to say he’s gone Yoda. After the climactic confrontation between Ren and Rey (Star Wars names will never cease to be the actual worst), Rey takes off to go find Luke and get her Empire Strikes Back training montage on. Meanwhile, Han Solo is dead, thanks to a reverse Vader-Luke situation in which the son dispatches the father. Like quite a lot of The Force Awakens, there are echoes and reverberations of the original trilogy in this scene, and therefore it doesn’t hit as hard. That said, I don’t know that it needs to. You’re never going to regain what Star Wars was when it was new. It’s like Kylo Ren trying to be Darth Vader, it’s never going to happen. Nor should it. These movies can succeed on their own terms as lighthearted action-adventure movies, which The Force Awakens, at least, does.