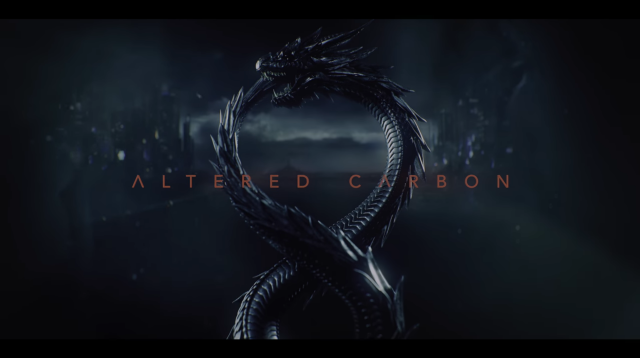 As a book-first person, it’s always mildly annoying when I watch a movie or show and am then informed that oh, this was based on a book I’ve not even heard of. Good or bad, now I have this version of a story and this vision of a world in my head, which then kind of makes me not want to seek out the source material. It’s all backwards! Anyway, Altered Carbon is such a situation and now that I’ve finished the ten episode run I feel like this is the rare time I might seek out the book. Just to see. I haven’t been so thoroughly conflicted about a show in a long time, so I am curious to read the source material to see what the original vison was. Does the book have the same flaws as the show? Does it execute on the wide array of cool ideas better than we see on screen? Does the author of the novel have a better grasp of how to write than the screenwriters? I certainly hope so, and it speaks to how much I like a lot of the concepts here that I’m willing to find out. Now that acknowledging the existence of the source material is out of the way, let’s take a look at this weird-ass show.

Altered Carbon wants to be every kind of science fiction. Its primary visual influence is Blade Runner, and there are clear cyberpunk through-lines seen everywhere from the character designs to the use of virtual reality to sick augmented ninjas. That said, there’s still not a lot of “cyber” happening. All the VR is self-contained, and the AIs seem to be relegated to their own lonely world. Meanwhile, Altered Carbon also wants to be a world-spanning, far-future kind of science fiction. There is an authoritarian, multi-world government known as the Protectorate, and of course there is an underground rebel contingent which employ guerrilla tactics. Their soldiers are called Envoys, and they’re famous for having preternatural combat skills and a highly developed sense of intuition. Our protagonist, Takeshi Kovacs, is one of these Envoys. Actually, he was. See, the rebels lost spectacularly and were wiped out, except for our man Kovacs, who was put on ice only to be woken up like 200 years later in order to solve a crime. So Altered Carbon also wants to be Demolition Man. A worthy ambition.

Despite secretly wanting him to be played by P.F. Tompkins, Poe is still the best.

There are some extremely cool concepts at play in this show, but the problem is that there might be too many to keep track of. Probably the most important thing to know about this future is the concept of “stacks” and “sleeves.” The idea is that there is now a mechanism to store a person’s consciousness in a portable hard-drive of sorts. This is the “stack,” and it holds all the information which makes a person a person. You slot this disk into the vertebrae of the neck at birth, I guess (the actual process is not spelled out super well), and so you have a backup should you get yourself killed. The body, then, is the “sleeve,” because you can now swap out a person’s consciousness between bodies. This is a form of immortality, of course, because when a body gets sick or dies, you just eject the stack and put it in a new sleeve. The only way to actually kill a person is to blow their stack. And if you’re extremely rich, you can simply back up your stack on a satellite or some shit, so if someone shoots you in the stack you can just download a new one and put it in one of your clones.

Of course, Altered Carbon is a heart a cyberpunk story, which means that the driving force behind everything is the heightened division between the rich and the poor. Kovacs was put on ice because he was a terrorist, but pulled out and put in a new sleeve because a very rich and powerful man wanted him to solve a murder. This rich guy, Laurens Bancroft, is hundreds of years old at this point, and he’s a bit of a collector. Also he was murdered. And so he pulls some strings and retains the services of this old Envoy to solve his own death, mostly because he thinks it would be neat to do so. Kovacs thinks this is bullshit, but he’s deep you know, so eventually he agrees to take the case, and then Altered Carbon ostensibly becomes a detective story. However, the narrative almost immediately goes off the rails and tons of characters and subplots become intermingled and new shit is being introduced pretty much the entire time. It’s exhausting trying to keep up with all the different threads, which is maybe a reason why the dialogue and exposition is such a ham-handed mess most of the time. Like, we know this is confusing so we’ll just have these characters repeat the same unsubtle motivations over and over. But hey, this show looks cool as hell, so there’s that. I don’t know, there’s more going on. Allow me to get more specific. If you don’t know the drill, spoilers after the break. 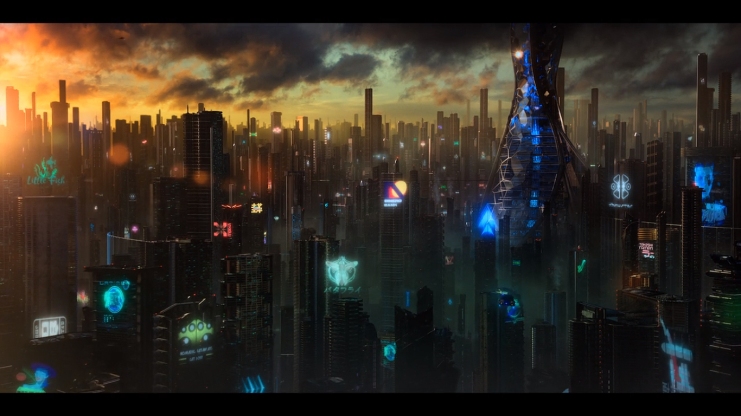 God, yes, just hook it into my veins.

Kovacs is a fairly boilerplate anti-hero, which is mildly disappointing. When he’s pulled out of cold storage, he’s surly and mean and that never really goes away. However, he eventually thaws out a bit and makes friends and then it turns out he has a heart of gold and that’s actually good. This whole story is woven from a hundred cliché threads, but that’s fine with me if it works. Characters, most of which are a familiar trope of some kind, are extremely hit-or-miss. There’s not a lot of subtlety when it comes to dialogue and relationships. Kristin Ortega is a sassy, obsessive cop who doesn’t trust Kovacs at first but then she does! Vernon Elliot hates Kovacs at first, but then he doesn’t! The thing is, there are so many characters and so many plot elements that nobody really has time to develop properly, so the story is forced into being blunt as possible in order to convey meaning. Elliot especially suffers from this, because he just kind of shows up and is mad most of the time until he isn’t. I don’t know. The only secondary character I really enjoyed was Poe, who is an artificial intelligence which runs a theme hotel called The Raven. 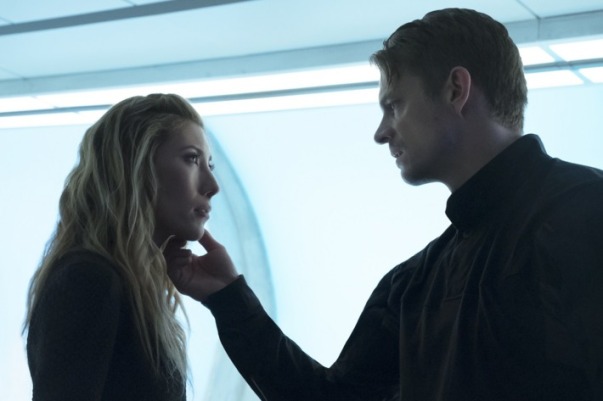 Yeah that’s totally how I look at my sisters all the time. Nothing weird here.

Have I mentioned how amazing this world looks? Because damn. The Raven, a building, has more personality than half the characters on the damn show. The art direction is on point, and this shit looks expensive, I tell you what. If only they had managed to fill this incredible looking world with better characterizations. Probably the most egregious example is who ends up being the show’s big bad. No, it’s not Bancroft causing the most problems. Rather, it’s Kovacs’ sister, Reileen Kawahara. She just, ugh, she sucks so much that it distracts from some otherwise very cool scenes. Let me hasten to add that this is not the fault of the actress, she’s doing the best one could expect given the material. What makes her character even more tragic is that her introduction is one of the coolest moments of the entire series. Rei rolls up and katanas the shit out of a bunch of goons and it’s dope as shit, you know? This is followed by the longest episode of the season, which is a flashback episode that sets up the final showdown and the rest of the tragic drama which follows. This episode reveals Rei’s character as a flat, single-motive villain, and therefore the entire rest of the time she’s onscreen talking I’m sitting there hoping someone just kills her already.

That’s not a compelling villain, and Rei is even less nuanced than Bancroft, who the show comes perilously close to ignoring in the last few episodes. Since I mentioned Game of Thrones previously, it’s fair to compare Rei to Cercei Lannister. They’re both ruthless and obsessively focused and dangerous. While it’s not clear if Rei actually wants to fuck her brother or not, her obsessive love for Kovacs is certainly not entirely sisterly. But there’s no further nuance to Rei’s character. She’s just crazy and needs to be put down. But then there’s that intense clone fight with Ortega and her rad bionic arm. I just don’t know what to think! I mean, poor Ortega, she gets it the worst all around. And while her Latina family dynamics lend a fascinating window into religion’s role in pseudo-immortality, it goes badly for them. Meanwhile, the Elliots are barely sketched out as characters, and despite Lizzie’s rad-as-hell rescue mission, she’s still paper-thin. Actually, Lizzie Elliot is a nice example to close out on. Her character is barely developed and I’m still not perfectly clear on her connection with the initial Bancroft plot. Yet when her arc, such as it is, pays off it looks super cool. You know, I think there’s just enough good here to outweigh the more tedious aspects to recommend Altered Carbon. It’s only disappointing because with more careful writing it could have been something special.