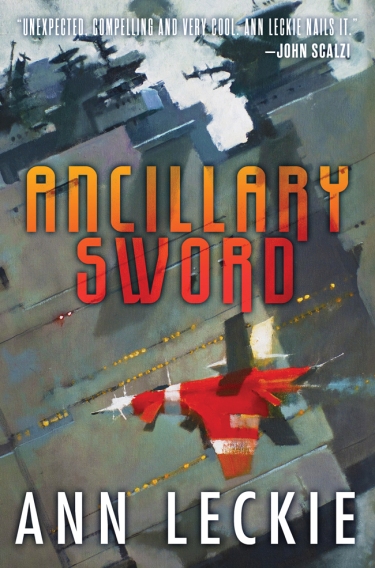 Ancillary Justice was a revelation. It was a fresh shot of imagination in a genre that sometimes relies too heavily on tropes, and Leckie is a strong enough writer to make all her incongruous ideas work. That first novel, and for a debut novel it was a banger, had a lot of work to do. Justice was not only an introduction to a whole new world, but an introduction to a new way of thinking about character. The protagonist, Breq, is not human. Rather, it’s the remnant of a starship artificial intelligence that inhabits the body of an “ancillary,” which is to say the husk of a human slave whose mind was destroyed to make room for the machine intelligence. I’m assuming if you’re here reading this, you’ve read the first book, so that should make more sense than it otherwise might. Most of that that first novel is coming to terms with Breq and why she acts and thinks the way she does, while the rest is coming to terms with the empirical, matriarchal, highly rigid society that makes up the Radch. The narrative was a revenge story, in which Breq would very much like to murder the Emperor, Anaander Mianaai (and yes, the overwrought names are a weak point). Unfortunately, this is very difficult because the Emperor has like a thousand ancillary bodies and also has a split-hive-mind personality which is currently at war with itself.

It’s all very complicated, but the thing about Ancillary Sword is that all the high-level intrigue is happening in the background. This book is a direct sequel, but it has a very different feel from the first. The narrative has a much smaller scope, since Leckie did all the heavy world-building in that first book. We know Breq now, so there’s more fun to be had watching her interact with her crew. The story picks up immediately after the first, with the version of Mianaai who wants to tone down the whole violent colonialism thing, sending Breq off with her own ship. Now Breq is not entirely thrilled with this state of affairs, since she in no way trusts either version of the Emperor, but she makes the best of the situation and takes off for a system which contains the sister of Awn, the officer from the first book who Breq both loved and murdered. Meanwhile, local intrigue is afoot.

When Breq rolls into town, or onto the space station, whatever, things done get shook up. Ancillary Sword is a smaller story, a tighter narrative, but thematically it still takes big swings. The focus of this novel seems to be that of labor politics, and the inherent inequity of the Radch Empire. The action of this novel is restricted to a single system, and most of it seems to be Breq cleaning house before what is presumably the climactic action of the third book. This house cleaning, of course, upsets the local balance of power. It’s pretty fun to watch this A.I. upset the cart and then rather brusquely deal with the consequences of her actions. While yes, she’s out there righting wrongs and actively making things better for the underclass, Breq is also preparing for the larger battle to come. Readers may forget the larger picture at times over the course of Ancillary Sword, but Breq never does. 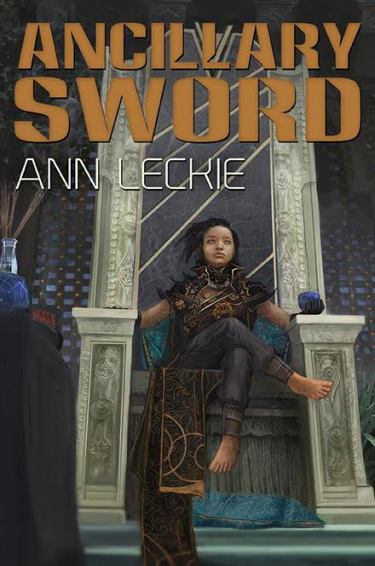 This is a dope cover but put some shoes on, dang.

The Ancillary series touches on many themes – Leckie is fearless when it comes to poking at various social issues – but most of what is at stake here is Breq’s ability to navigate the rigid hierarchy of the Radch Empire to further her crusade against the Emperor. The Athoek System appears to be something of an agricultural backwater. Most of the dignitaries and functionaries and other sorts of -aries live on the space station orbiting the big, inhabited planet. On the surface of Athoek, there are vast tea plantations. It’s pretty much an entire planet set aside to grow tea for the citizens of the Radch Empire. Exceedingly fancy tea, I might add. The person in charge of this operation is Citizen Fosyf. She sucks. She also has a daughter named Raughd, who sucks even more. The reason these two suck is that the Radch Empire is structured like it’s the 14th century. It’s quite weird, in this vast sci-fi universe, to find these ridiculous nobles prancing around fretting about the quality of the dinnerware and tea while literal space aliens are menacing around the peripheries of human space.

Yet fret they do, and Breq is here to wreck up the whole system. The Radch Empire is comprised of humans, and it spans nearly the entirety of human space. They are ruthless conquerors, and when they invade another human colony they leave nothing to chance. Captured fighters are usually frozen to be used later as ancillaries. Once frozen they get maybe thirty seconds of horrifying consciousness while their mind is obliterated to make room for the ship A.I., which is as grim as it sounds. Conquered citizens, if docile, are then basically made into serfs. That’s who works the tea fields for Citizen Fosyf. They still have to publicly observe Radch customs, but they otherwise seem to hold onto their native identity as much as possible, including all the resentment you’d expect from a conquered people. They keep their language and sense of gender to themselves (gender identity being one of the issues Leckie deals with indirectly, as the Radch Empire is single-gendered by custom, not biology, which is to say everyone is a “she” regardless of their genitals). The big drama of Ancillary Sword happens because Breq has no patience for aristocratic bullshit.

Citizen Fosyf and the rest of the Radch nobility treats the plantation workers exactly as you’d expect. Citizen Raughd, the horrible spoiled daughter, uses various workers as sex toys. Sometimes she bops up to the Station to abuse her kind-of girlfriend. Raughd is basically a caricature of the vain, mean-spirited aristocrat. And despite being well-worn territory for period dramas on the BBC, it’s weird seeing it in this context. It’s like my space opera swerved into Downton Abbey territory. Breq, as the sympathetic 2000 year old A.I., ruins her whole life, and it’s glorious. The point of all this, I expect, is the notion of Breq humanizing the social structure of the Radch, which are of course incredibly inhuman in their rigidity. It’s unfair to Leckie to boil all of this down to such a trite conclusion, however. “But maybe… the machine is more human after all. How deliciously ironic!” Boo on that. The story rises above that because the characters are so well drawn. Like any cliché or trope, it can still work if you know what you’re doing. And Leckie knows what the fuck she’s doing.