In Which I Ramble About Going Outside

Posted on November 8, 2017 by apocalypedia

Remember summertime? I don’t know about where you live, but here in Central Oregon it was pretty much terrible. This was even more upsetting than usual because last winter was a long, grey, cold, snowy nightmare – a grim twilight of icy gloom that seemed to last well into May. Hell, the first couple of weeks of June were colder than usual. Imagine my unmitigated joy of starting my new job and watching snow fall two weeks after flippin’ Memorial Day. At some point, the Weather Overlords flipped a switch and it went from obnoxiously cold and damp to crazy hot pretty much overnight. July was hot. Just unusually, uncomfortably hot. It was gross, and couple that with the fact that the high country was still covered in a ridiculous amount of snow very little high country hiking was available. Of course the crazy heat melted even the above average snow pack pretty quickly, but it also facilitated above average vegetation growth, and coupled with an unending heat wave (temps were above 90 most days during July, which is not normal for the area) these things combined to set most of the Northwest on fire for the duration of August. That’s not an exaggeration. Here in Bend, there were solid weeks where visibility was negligible due to smoke and oh hey it’s still 98 degrees outside.

I took this on June 9th. THE NINTH DAY OF JUNE. We, uh, didn’t have many visitors that day.

So summer was bad. This was all mitigated by the fact that I got to work a pretty cool job the entire time, though. Now, I will say right up top that my job had some very real, very serious drawbacks. However, so do all jobs, and there’s no real point in dwelling on the negatives, especially considering the downside of a job which works with the general publish should be self-evident. Besides, where I work is more compelling than the hour-by-hour of what I do. My workplace is one of the largest, most potentially active volcanos in the country: Newberry Volcano. Sometimes I’m on the flanks of said volcano, sometimes I’m right up in there, literally inside of the thing. Of course, the city of Bend is right on its feet, built on top of lava flows from massive eruptions that happened not all that long ago. I suspect most people passing through don’t pay all that much attention to it. For all its size and ferocity over the last half-million years or so, it’s a low profile volcano. The Three Sisters and the rest of the Cascades are much showier, after all.

Actually we had one visitor that day. Look at this little guy! He made it up into the branches and then just hung out for a while. No idea where Momma was, so I stayed in the truck.

I’m not really here to write a bunch of interpretive material. If you want that, I would encourage you to come to our National Monument next summer – we open in May. I may or may not be there, government jobs are fickle and fleeting, and a summer answering the same questions thousands of times a day can wear on anybody, but you should come anyway. This invitation is contingent on you acting right, though, and this leads to my complicated, paradoxical thoughts on the nature of public land. I spent my summer talking with both locals and visitors from around the world. If you recall, we had a total solar eclipse not that far away and as such we had a massive influx of visitors over the two weeks of surrounding said eclipse. Now, considering I’m a dang ranger, I obviously want people to come and enjoy what we’ve got going on here. I want the opportunity to show people the magnificence of the landscape. There’s so much weird stuff! I want the opportunity to help newcomers to the outdoors how to respect the land. The problem is, the more people who show up, the more stress is put on the whole ecosystem, and that’s a difficult balance.

We’ve started raising prices to utilize public lands, which is something that doesn’t affect me as much since I work for the Forest Service, an entirely different agency than the National Park Service, and as far as I know it’s still $5 a day to come check out Newberry National Monument. It probably won’t surprise you that people still grouse about that five bucks. From what I hear, there is plenty of public backlash against the significant price hikes in the most popular National Parks. That’s fair. Here’s the thing though: we don’t get funded like you think we might get funded. We just don’t. Yes, yes, I know you pay your taxes and using public land should be covered. And you know, the vast majority of public land is still totally free for you to enjoy. It’s just most of that land is a touch more rustic than you might like. The really cool stuff, the National Parks, the Monuments like Newberry, well, those attract more people. More people means more jerks. More jerks means more maintenance and enforcement is necessary. And even further, the more accessible and developed we make these places, the more people will come. I want everyone to enjoy their natural heritage, but at a point the sheer numbers will do more harm than good. 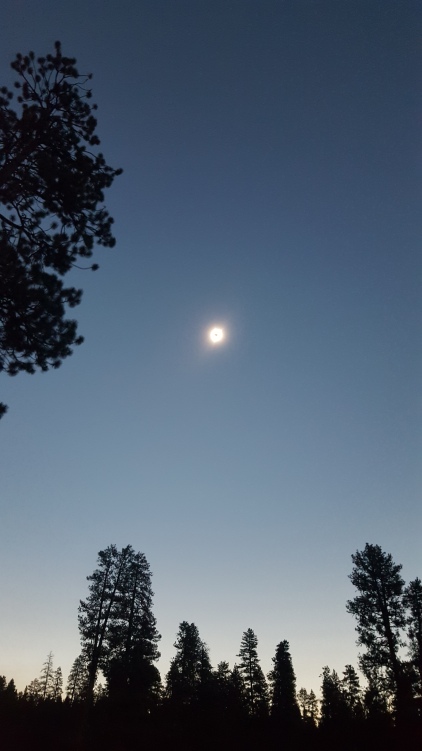 Enjoy a poor photo of a total solar eclipse taken on my phone. Look, I spent those two minutes being utterly awestruck and amazed. Sorry.

It’s a tough situation and I definitely don’t have answers. One of the things I do, since I don’t care for crowds but still would like to see cool things, is try and find places that are off the beaten path. Not everything is published in the brochure, and that’s on purpose. Most National Parks that I’ve been to have the crazy, super crowded thoroughfares surrounded mostly empty backcountry. Of course, as outdoor recreation becomes more popular even these places are started to get crowded. This is going to lead to unpopular-but-necessary decisions like requiring lottery-style permits to use popular backcountry areas. Here in Central Oregon, places like Jefferson Park and Green Lakes are likely to move to tightly enforced systems like this. I implore the public to realize that these policies aren’t in place because we’re a bunch of draconian fascists who are just trying to harsh your good time. It’s because sheer numbers can ruin wilderness. Seriously, who wants to hike ten miles into alpine lake country to camp among a hundred party kids trashing the place? Hell, the people could be super well behaved and the sheer amount of boots and tents is going to do serious damage.

This was taken from Paulina Peak on one of maybe three clear days in August. In the distance one of two major fires is burning all the way out of control in the Three Sisters Wilderness. That’s Paulina Lake there, because nobody in Oregon has any imagination when it comes to naming things.

So when you come out to Newberry to marvel at this ridiculous volcano, spread out and be mindful. Come to the visitor center and listen to our goofy volunteer rangers explain lava and trees and our idiot squirrel population. But also maybe drive out on a gravel road and seek out some weird things. On my ranger hikes, I give people (if they’re cool) hot tips on off-brochure travel, and they almost always appreciate the opportunity to get out there and see something new. On the one hand, more boots means more potential for damage. On the other, it’s still baffling to me that I get people coming up who have lived in the area their whole life and have never made the half-hour drive before. You literally live in the shadow of a massive volcano that absolutely will erupt again, there is a paved road that leads inside of it, and that’s never made you curious? Better late than never, I guess. Just be cool about your newfound love of the outdoors. If you are, I know some places.

The little seen backside of Newberry volcano. I’m standing on a twenty foot drift of pumice from the Big Obsidian Flow eruption and looking out over a few dozen of Newberry’s cinder cones. Nobody comes out here.