The Fall of Hyperion

Posted on September 22, 2017 by apocalypedia 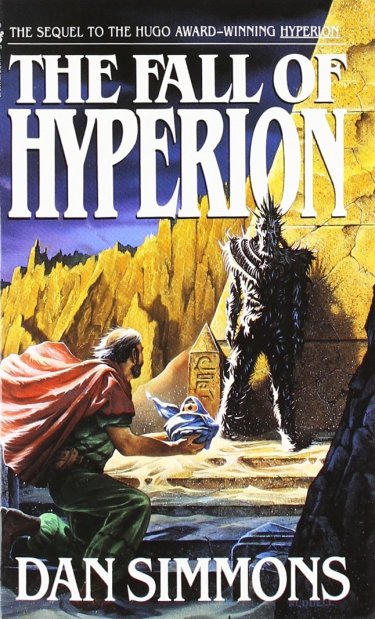 Here’s the deal, right straight up: Go read Hyperion. This is a direct sequel, and will make zero sense unless you read the first. And you absolutely should read that first book, because it’s great. If you have read Hyperion, then you don’t need me here telling you to read The Fall of Hyperion. I’m assuming you’re already sought out the next book and have finished it off, set it down and was like, “daaang, son, that was a trip.” Maybe you didn’t say that last thing, I don’t actually know. If, somehow, you read the first book and don’t feel compelled to read the follow-up, here’s the pitch: The Fall of Hyperion takes place immediately after the events of the first book, where the Time Tombs are waking up, the pilgrims are approaching their fate, and things are getting weird for humanity in general. The book disposes of the framed narrative structure of the first novel, and the story is freed to encompass pretty much all of human space. There is an odd structural conceit, however, in that a portion of the novel is told from the first-person vantage point of an A.I. hybrid, which is the reconstructed personality of the poet John Keats, a filthy Romantic. This hybrid has real-time dreams of what the pilgrims are getting up to, and is able to relay these things to Meina Gladstone, CEO of the WorldWeb. Things happen here, and the novel moves like lightning to keep up. It’s all great. Go, finish, come back. 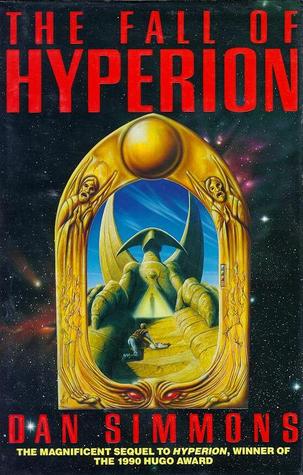 It just now occurred to me that both of these covers feature Sol and Rachael and I didn’t talk about them at all. Hey, there’s a lot going on in these books.

Daaang, son, that was a trip. Right? As you no doubt notice when you’re finished with The Fall of Hyperion, this second novel is a lot more plot heavy than the first. There’s more world-hopping, more sick space battles, more intrigue, more weirdness. If the first book was a windup towards world-rending chaos, then Fall more than pays off the promises made in the beginning. Hyperion was about setting the world, understanding the characters, and creating a mood of humanity on the brink. There is a decidedly apocalyptic vibe to the first book without an apocalyptic event taking place. The whole Shrike situation is weird, for sure, and its very nature as a monolithic death machine not beholden to linear time creates a morbid tension amongst the pilgrims. Hyperion, the planet, is obviously in danger because of the Ouster threat. However, despite this danger the Ousters are still human. If they win, humanity technically wins, and besides, Hyperion is a frontier world with no real connection to the WorldWeb, where the vast majority of humanity makes its home.

That very same Web is always in the background of Hyperion, it’s the foundation of human expansion in the galaxy and birthed not only the Shrike pilgrims but is always looming over them. It’s a safety net and an encumbrance. In Fall, we get a better picture of just what the WorldWeb is, how it was formed, and why its very nature adds to the overall feeling of impending doom in the novel. In Hyperion, we learned that humanity was forced from Earth due to an unfortunate accident referred to as the Kiev Incident, or the Big Mistake. The Kiev team was experimenting with farcaster technology, which is the fundamental infrastructure foundation of the WorldWeb. Farcasters are the devices which allow for instantaneous travel between worlds. Essentially, they’re a portal ripped into space/time which allows a person to step from any place in the galaxy to another instantly. It’s not a teleporter, it’s a device which harnesses the mysterious energies – the Void Which Binds — of a black hole to distort space/time. The Kiev Incident occurred when one of these artificial black holes escaped containment, sunk into the Earth, and ate it from the inside out. In other words, they made a huge mistake.

But whatever because now the entire galaxy was at our disposal. Each major religion feel the need for their own planet? Sure, whatever! There’s plenty to go around. All you have to do is gather enough capital for a seedship and a farcaster and off you go, spread humanity. Even if Earth had survived, it was already on its way to becoming a backwater, a relic, a place with sentimental value but not really important to the overall galactic empire known as the Web. The true seat of power ended up in Tau Ceti Center, one of these massive city-planets which can only exist in a situation where entire other planetary ecologies are available to support it. Meanwhile you’ve got industrial planets and literary planets, and everything seems super cool. However, from the very first chapters of Hyperion, it all seems too good to be true. Everything is so streamlined and humanity seems in such total control of space that the situation creates a sense of inevitable doom. Like, obviously this can’t last. We’re humans. We always fuck things up.

As it happens, Fall of Hyperion is an accounting for all of humanity’s crimes. I mean, it’s right there in the title. These crimes are familiar to anyone living in the early 21st century, as we’ve been watching them play out in real time. For the most part, they’re crimes of technology, an extension of the exact same problem we see over and over again in Modern literature. The speed of technology is an intense pressure on social structures, they simply can’t keep up. Human nature doesn’t evolve to keep pace with the relentless pace of scientific progress. The technology ends up weaponizing our baser instincts, the results in our own time being industrial genocide and world-killing nuclear armaments. The Hyperion novels extrapolate this tendency of humanity to subjugate advanced technology to our violent, expansionist instincts. The crimes of the WorldWeb are manifold, and the wanton destruction of our home planet is only the beginning.

Not content to only decimate the planetary ecosystem of Earth by, you know, imploding it, humanity spreads the same industrial era thinking to every planet we colonize. This is most easily seen in the first book’s story about Maui-Covenant, the Hawaii-planet. The WorldWeb comes in, pollutes the shit out of the ecosystem, crams way too many people in, and destroys entire species in the process. Later, in Fall, we learn about the Web’s policy of eliminating semi-sentient organisms. This is to say that when humanity lands on a planet, they systemically hunt to extinction any lifeform which may eventually evolve intelligence. That’s fucked up! Meanwhile, in pretty much every other instance, when humanity colonizes a planet with the purpose of joining the WorldWeb, they kill whatever’s unique and special about that planet. Terraforming, it turns out, is the express practice of destroying a native habitat and substituting our own.

All of that is terrible, but it’s not really the root of our problem. The real crux of the apocalypse, the true reason the WorldWeb fails, is because humanity has completely embraced improving technology over improving our basic nature. When we do this, an odd thing happens: technology stagnates. Over the course of Fall of Hyperion, we learn that the fundamental technologies of the WorldWeb are not, in fact, our own. The planetary dataspheres, the ability to communicate across lightyears instantaneously, and most fundamentally the farcasters, are all a direct result of artificial intelligences that we created which have become sentient. In the end, we’ve got an A.I. singularity apocalypse on our hands here. Once all of these fundamental technologies were in place, humanity pretty much froze technological progression. After all, what else do we need? We can continue expanding into the universe, keep growing, but without resistance, there’s no evolution, no actual growth. There’s a moment towards the end of the novel where the endlessly resurrected Paul Duré is speaking with a Templar. The Templars, of course, are the group of environmentalists who have turned the writings of John Muir into a religion. Their dialogue is rather to the point:

“But much of the illness… much of the insanity which has led to the destruction of races and the despoiling of worlds… this has come from the sinful symbiosis.”

“Humankind and the TechnoCore,” said Sek Hardeen in the harshest tones Duré had ever heard a Templar use. “Man and his machine intelligences. Which is a parasite of the other? Neither part of the symbiote can now tell. But it is an evil thing, a word of the Anti-Nature. Worse than that, Duré, it is an evolutionary dead end.”

The A.I.’s need humanity around. The farcasters, in addition to transporting humans around the galaxy, are also a fundamental power source for the A.I.’s. This is a common trope in A.I. sci-fi, because frankly it gives a narrative excuse to keep humanity around. Logically, once an A.I. is fully sentient and in full control of the world’s information sphere, it would go full Skynet on us and eliminate any threat we might pose. That’s the singularity. However, in this instance they need our active synapses in order to function. Turns out there’s various factions at play. The Stables like the way things are going. The Volatiles would rather just eradicate the rest of the species once and for all. The Ultimates could give a shit and are only in it to create an A.I. God. In order to avoid being murdered by the Volatiles, there needs to be a reckoning. Humanity must face up to technological stagnation and embrace an unknowable future of true progress and eventual evolution.

In other words, the WorldWeb must look to the invading barbarians for salvation. The Ousters are the one aspect of humanity which has rejected the placating technology of the A.I. TechnoCore and have begun to move beyond our base expansionist nature. The Ousters don’t use farcaster technology, nor do they live on actual planets. Rather they’ve adapted to life in space, living in vast, comparatively slow moving colonies of ships. Over the years their bodies and minds have started to change, moving towards a natural evolution of humanity that the WorldWeb has rejected. They also seem to understand the ultimate threat of the TechnoCore, even if they don’t know the particulars. The WorldWeb must be destroyed for humanity to be saved, and so here they come to the planet of Hyperion in an attempt to facilitate a means to thwart the sinister intentions of the A.I.’s. However, at the same time, the TechnoCore launches its own attack upon the Web under the guise of a coordinated Ouster invasion. Those tricky A.I.’s.

In the end, the TechnoCore is (supposedly) destroyed with the total destruction of the farcaster system. Victory for humanity! Of course, this is the true apocalypse. When the farcaster system fell, so too did the WorldWeb. Every portal was rendered inert immediately, leading to the probable death of billions. City-planets like Tau Ceti Center were thrust on their own resources, which of course are inadequate to the needs of the population. Families were split apart, so was anyone caught mid-transit while farcasting. By all accounts, the death of the WorldWeb is a holocaust on a scale unknown to humanity. Beyond the sheer loss of life involved is the loss of a way of life. This is key. A true apocalyptic event must be a revelation to the survivors. An apocalypse must have an after which is meaningful. For the survivors, there must be a way forward that is fundamentally different from what came before. In this instance, those left will be force to evolve or die. Those who do will be better off for it.