The Book of the New Sun: The Citadel of the Autarch 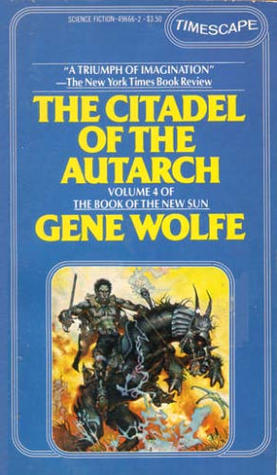 With every additional entry in this series, I feel less and less confident in my ability to grasp just what in the actual fuck is going on. That should probably be the baseline of reading a book, right? To be able to identify incredibly basic things like: Who are these people? Where do they live? What are they doing? And maybe, even: Why are they doing these things? Answering those questions in an artful way is pretty much how you tell a story. At first, The Book of the New Sun seemed to do these things as you’d expect. There is a boy named Severian. He lives in a massive, ancient city named Nessus. He’s a torturer. Eventually he gets kicked out of his home for being nice to a lady (by which I mean he allows her to kill herself rather than continue to torture her). From here he is to travel north and seek his fortune as a traveling executioner (it’s more complicated than that, but we’re talking basics here). His journey is interrupted by weird shit almost immediately, however, and that’s what injects uncertainty into the narrative. This uncertainty continues to ramp up with every page, and by the end of the cycle I barely understand what I’ve just read.

So here’s some pro-tips for folks who are deciding whether or not this series is for you. First of all, maybe don’t skip to an article about the last book in the series. That said, I don’t think it’s possible to actually spoil anything about these books. Anything I’d say about the ending would just be inscrutable to anyone unfamiliar with not only the story, but Wolfe’s delivery of the story. The other tips are pretty straightforward. Read slowly and pay attention. I tend to blast through novels as quickly as possible and sometimes I miss subtleties. Everything in The Book of the New Sun is a subtlety. Try and read them all together. Again, I did not do this, often reading four or five (or more) books in between entries. By the end of each book I felt like I was almost catching on to Wolfe’s rhythms and narrative tricks, and if I had stuck with it I think the following volumes would have been easier to unravel. Instead I’d return to this murky, fascinating world just as confused as I was when I started. Finally, these books probably need to be read more than once to really grasp what’s happening. I read the first novel twice (the first time a couple of years ago, before I wrote about everything I read) and the second time through it made a bit more sense. I’m sure a third time through would be even more enlightening.

This is all to say that if you intend to read The Book of the New Sun, you best bring your fucking A-game as a reader. I understand if you look at the cover art of these things and think to yourself: “Oh, heh, this looks like some pulpy-ass sci-fi/fantasy nonsense” with the intention of enjoying some light summer reading. This is not that. You have to work. Wolfe isn’t trying to make your life easier, he doesn’t care if you like Severian or not, he doesn’t care if you understand when and where this even takes place. The author is obfuscating the narrative to himself, which barely makes sense but that’s what these books are all about. Layers upon layers of obfuscation. Which is fine, because it allows me to use the world “obfuscate” a lot, which I enjoy. Other than that, boy, this was actually exhausting. I’m glad I read them, but I don’t know if I will ever try and read them again. I don’t even know if I can in good conscience recommend them. Yet now that I’ve finished The Citadel of the Autarch, I’m going to try and unravel what I just read. I have assuredly missed things. Like, most of the things. Therefore the following section is going to be more trying to explain to myself what happened, and less identifying and discussing themes. It turns out you have to be able to understand the characters and plot before making grand assumptions of authorial intent. 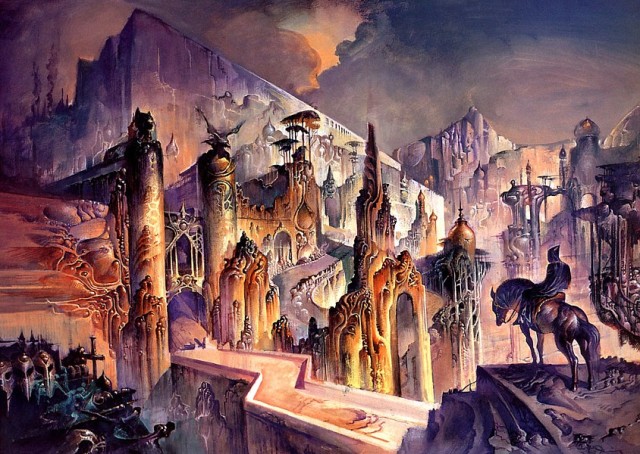 This weird-ass depiction of The Citadel of the Autarch pretty much encapsulates the feel of the novel. It looks rad, is compelling and strange, and makes no damn sense at all.

From the very beginning of the series, it has been clear that Severian is writing from a future point of view. Specifically, we know very early on that he is going to become the Autarch, which is like the king/dictator/emperor of the Commonwealth. This kind of narrative framing is not uncommon, but I’ve never been a huge fan, as I feel like it can rob a story of its immediacy. However, The Book of the New Sun ain’t about that. There are action set pieces and moments of dark despair and tense moments fraught with uncertainty, but underlying all of that is the knowledge that Severian, at least, will end up running the place. His life is not in danger. And you know, if it was, whatever. I’ve long since come to the conclusion that Severian kind of sucks, and nothing that happens in this final volume has changed that.

Okay, I’m going to try and walk through the plot as I experienced it here. From the beginning Severian has wandered the land with two constant companions: His sword, Terminus Est and the relic known as the Claw of the Conciliator. Terminus Est was real good at lopping heads off and the Claw seemed to contain the power to heal and at times straight up raise the dead. At the end of the previous book, the sword was destroyed and the Claw was shattered but still vital. Oh, but get this you guys, the power of the Conciliator has been inside Severian all along. Because Severian is the Conciliator? That’s less clear. Anyway, Severian is once again in desperate straits, wandering around a fresh battlefield trying not to dehydrate and/or starve to death. He eventually catches up to the war we’ve been hearing about for three books and resurrects yet another poor bastard with his inherent Claw power. These two stumble into a camp for the wounded where people either die or are rehabilitated. Severian kind of does neither.

While in this camp, Severian listens to stories. They’re probably important, I don’t know. One of them is about a rooster who has a hubris, another is about fratricide over a lady, there was another one I forget. Look, like I said, if you’re here hoping I’m going to elucidate something for you, you’re going to be disappointed. After storytime, Severian decides he would like to try a war out. The combatants are the forces of the Commonwealth, who are ostensibly led by the Autarch. The enemies are a civilization called Ascia, of which Severian knows nothing. Eventually we meet a citizen of Ascia, and it turns out they’re fucking weird too. Like, so weird. Fascinatingly weird, but what in these books isn’t? Now the Ascians seem to operate like some kind of individuated Borg. Their minds are utterly assimilated, and they are only able to speak in pamphlet form. By that I mean they speak in formal paragraphs of propaganda, as if their only education is in the form of social indoctrination. Their entire language seems to be comprised of bullet points from some kind of mysterious manifesto. You can understand the words they use, but there is literally no context which makes them coherent. Of course one of the Ascians tells a story too, which other characters “translate,” but come on now. 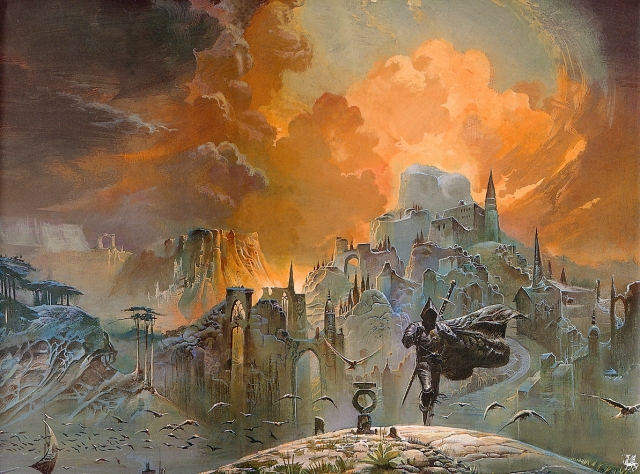 I may be wrong, but I think fantasy art probably peaked in the ’80s.

Bleep blop bloop, some other things happen. Look, I’ll skip to the important bit. Eventually Severian meets the Autarch, a thing which has been destined to happen the entire time. Severian has to succeed him at some point, right? Now, if you recall, during his adventures Severian participated in a ceremony where he ate his dead girlfriend which was spiked with a drug allowing her consciousness to reside in his mind. As the series has progressed, Thecla’s personality has become a part of Severian. He’s literally two people in one body. So that’s weird, but the Autarch has over a thousand. It turns out that this is a prerequisite of being in charge. Now the Autarch is on his deathbed and bequeaths control of the Commonwealth over to this nutbar young torturer. So Severian kills the Autarch while freebasing his brain juice (I have no idea what this process actually looks like) and now Severian has all the Autarch’s personalities within him.

In the end Severian returns to his home in Nessus, and returns to the Citadel where he grew up. Oh, first he catches up with poor, dead Dorcas and chooses not to speak with her. Okay. Anyway, he goes home then some apparently important things happen which serve to leave me confused, just like every other book in the series. There are aliens who might actually be humans who have left Earth to colonize the stars and are now differentiated from the parent species enough to be beyond our reckoning. Severian takes up the responsibilities of the Autarch – because he has assimilated all of the previous Autarchs – but he’s also the Conciliator maybe but we don’t know for sure. There’s a test? If there is he hasn’t taken it yet or maybe he did and created some kind of temporal time wave that sent this document of the future millions of years into the past – which is where live – and straight into Gene Wolfe’s brain and that’s what this whole “New Sun” thing is.

I’m really trying not to be overly flip about all of this, and am apparently failing, because the world Wolfe has created here really is fascinating. I totally understand that these books have serious fans who really, really get into it. There’s a ton to uncover and disseminate here, mysteries to unravel and theories to argue over. I’m way into the idea of a late, late, late stage version of humanity still around to witness the very death of the sun. It’s a little unnerving that human nature hasn’t changed all that much, but whatever, it’s a cool thing to imagine. Like of course a society staring down the gun of assured final destruction would get super weird and invent a new religion based on a dream of reversing the heat death of the universe. However – and I’m clearly in the minority of readers here, I think – there’s just not enough to really hold on to which would really ignite that drive to discover more about the world. I need a foothold in this world, a viewpoint I care about to allow me to ease into the setting a little bit. As is, Severian is slippery and quite possible insane, which is a difficult foothold to try and understand such an alien society. In the end, I’m glad I forced myself to finish these. I just wish I liked them more

Jump to the rest of the series: The Shadow of the Torturer; The Claw of the Conciliator; The Sword of the Lictor

Like Loading...
This entry was posted in Book of the New Sun, Books, Entropy. Bookmark the permalink.

4 Responses to The Book of the New Sun: The Citadel of the Autarch