I feel kinda bad for this game, because from what I can tell it got buried in the holiday releases of 2016 and it didn’t deserve to be overlooked. This is a definitely a case of the sequel pretty much fixing the problems of the first game. Here’s the thing about the first Watch_Dogs: it had a neat premise for an open world whatever-game, but it was just offensively mediocre. The systems were almost but not quite there, and the protagonist and story were just straight up awful. The biggest issue with the first game was the city itself. That version of Chicago was dull and devoid of character. I’ve never been to Chicago, but I get the feeling there’s more to it than just another video game city. There were cars and buildings and gang members and cops and sometimes things blew up. Actually, that kind of sums up the entire first game, but with “hacking.” Luckily, Ubisoft Montreal figured their shit out.

Pretty much everything story-wise from the first game is gone. Good riddance. The generic angsty white man from the first game shows up exactly once and doesn’t speak. Even that’s a little too much. The only hold-over from Watch_Dogs are the fake company names and the super-secret hacking club, Dedsec. The protagonist of Watch_Dogs 2 is a cool dude named Marcus. This time out, the man character is actually a character. Now, I’m not saying he’s a fully developed, layered character with a full arc or anything, but he’s got a goddamned personality. A fun one, at that. In fact, that’s the biggest and best change the sequel has delivered. Watch_Dogs 2 has a personality, it stopped taking itself so seriously and is willing to have fun. 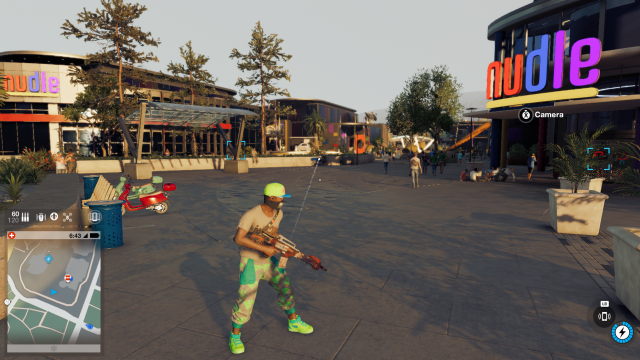 Not gonna lie, I really enjoyed roaming the fake-Google campus with a paintball gun, menacing millennials in my fly-ass pants

This tactic could have gone wrong. The promotional materials were a little on the cringy, try-hard side of things. After all, the story is about a group of twenty-something “hacktivists” who make internet videos in order to, like, save the world. Some of the clothing designs are a little much, and the personalities of the ancillary characters threaten to be obnoxiously over-the-top. However, the line is successfully walked. I suppose your tolerance for abject silliness may vary, but if you can appreciate occasional bit of goofy nonsense then you should be all right. The interactions between these people – who are lighthearted nerds – are generally easy going and rooted in dumb banter. The game rarely veers into embarrassing internet meme humor and with the exception of one or two missions, the tone stays light throughout.

On the gameplay side of things, well, it’s an open world, GTA-lite kind of thing. You drive disposable cars around and wreck shit up and do missions and whatnot. This time out, the game is set in the actual Bay Area (which includes San Francisco, Oakland, Marin, and Silicon Valley). There are plenty of recognizable landmarks, and the rest of the map reads like a scaled-down version of the real thing. I don’t know San Francisco that well (I would rather live on the surface of the sun), but Watch_Dogs 2 pretty much nails the feel of the city, and that’s important. Of course, the game uses fake names for places like Google and Facebook and the like, but the corporate campuses are a vital part of the environment. Visually, the game looks great. Something about the lighting in particular properly evokes that part of California so there were times in the game where I’d be driving at sunset past a grove of eucalyptus trees and flash back to my youth growing up on the Central Coast. It’s really well done. 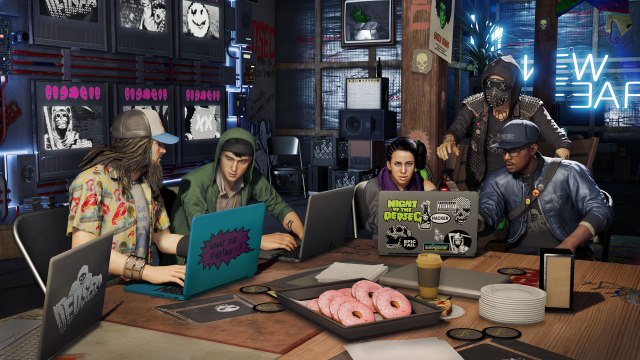 Your hacker crew is fun, even if they look all corny and dumb.

The story of Watch_Dogs 2 is, put succinctly, really on the nose. Like, almost too much. This is a 2016-ass game, and it’s clear the team at Ubisoft keeps up on the news. Also, thank god the development cycles of big games like this are so long I didn’t have to deal with an in-game Trump analogue. There are a few side missions that absolutely borrow heavily from relatively recent headlines. Just a for-instance there’s a point where you use your hacking magic to fuck with a CEO of a pharmaceutical company. This guy is a profiteer who jacks up prices on life-saving drugs in order to clear absurd profits for himself. He then uses his money to do things like pay a famous hip-hop artist to make an album just for him. If all that sounds familiar, that’s because it’s a thing which happened in real life. Except without the part of the miracle hacker who managed to tap into the CEO’s system to mess with him. So that’s what this game is doing.

The overall story is a little corny, but it’s okay. Sometimes a little cornball feels all right. Your hacker buddies are out to Do The Right Thing. Because, you know, they’re the good guys. The bad guy is some New Corporate, man-bunned jackass. He runs a company called Blume. Blume has a system called ctos, which is basically an interconnected, fully networked city infrastructure. In order to properly run this system, they need all the bandwidth and all the metadata. So they steal it. They leech on social media companies, and the Google analogue (Nudle, which, heh), there are robots and rockets and sometimes things get a little silly. The game seems to think some hacker group putting out lame, earnest videos professing “the truth” on YouTube would actually influence the public, so that’s rather charming. I’d like to live in a world where people cared.

I also got to live out my fantasy of driving a scissor lift around industrial Oakland. What? You never dreamed of doing that? Weirdo.

Instead, I live in a world where Donald fucking Trump is president and over half the voting public couldn’t be bothered to show up and vote. No amount of sassy videos were likely to change that outcome, especially when the odiousness of the campaign was out in the open for all to see. One of the main missions in Watch_Dogs 2 actually deals with a compromised politician who’s embroiled in a voter fraud situation. Of course Blume and the not-Facebook are manipulating data and feeding people fake news in order to sway polls to benefit their guy (like I said, it’s all pretty on the nose). Marcus and Dedsec save the day, of course, by anonymously leaking proof of the fraud and the crooked politician bites the big one. How I would love to believe such things were possible. It’s comforting to play in a world where the general public is sensitive to objective truth, and not beholden to the entrenched tribalism of contemporary politics.

Watch_Dogs 2 is endearingly optimistic about humanity, which is in tune with the overall colorful look and feel of the game. All of the various plots and subplots of evil tech companies are realistic enough to be uncomfortable (to the point where I’m glad I didn’t play this upon release, which was the week after the election), but in the end it’s okay because our friendly, goofy super-hackers save the day. We live in strange times, teetering on the edge of a history that looks like it wants to repeat itself in the worst ways. Watch_Dogs 2 seems to be concerned with the vast concentration of data, wealth, and power in the hands of a very few massive tech corporations (which is funny considering the game is made by one of the biggest game companies, Ubisoft). Income inequality is the fertile ground that grows dystopian nightmares, and the Bay Area of this game seems like a city existing right before the cyberpunk future descends upon it. I don’t know where we’re headed as a country, but I can only wish I were as confident in the inherent goodness of humanity as Watch_Dogs 2 is.