The Hitchhiker’s Guide to the Galaxy

When I was young and sure that I was going to be a writer when I grew up, I wrote a lot of really terrible fiction. That’s actually a common and good thing. It turns out there are lots of ways to write bad stories. Obviously, there’s simply being a poor craftsman. If you don’t know how to make words and sentences do what you want them to do, your output probably won’t be awesome. Hell, even if you ostensibly know what you’re doing – *glances nervously in mirror* — diction and syntax can always trip you up. Beyond the nuts and bolts of writing, there’s a myriad of other ways to churn out bad stuff. Your ideas can be cliché and boring. You characters can be wooden and stiff and unconvincing. And then there’s the tried-and-true method of failing to achieve your own voice. This is what I mostly did (although I assure you all those other things were present as well) at first. I’d read a book I really liked and suddenly that’s my new writing voice. I wrote quite a few Z-grade Stephen King stories, let me tell you what. Probably the worst trouble I got myself in, however, was right after I read The Hitchhiker’s Guide to the Galaxy and thought, I could totally do that!

No. No I couldn’t. You can’t either. And here’s the worst part: I’m not entirely convinced Douglas Adams himself can keep it up for long. That’s because what we’re dealing with here is absurdity for the sake of the absurd. Hitchhiker is extremely silly, like wow, hello, okay. Adams is like novelized Monty Python. Wonderfully silly and delightful in small doses, but it’s difficult to keep up the pace. After a while it gets to be too much and it dawns on you that there’s nothing to really latch onto. Yes, a sperm whale and a bowl of petunias materializing in thin air and plummeting to their demise is actually pretty funny. But it doesn’t mean anything. 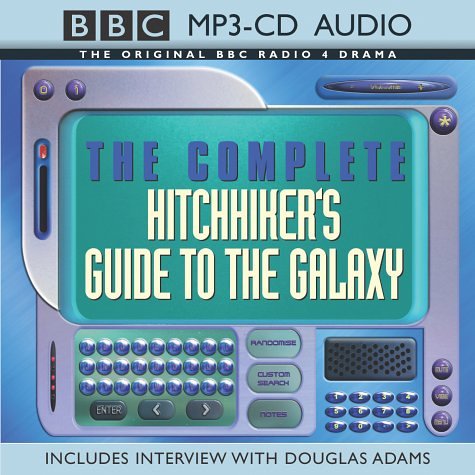 Fun fact: All this nonsense started out as a radio show. The books are essentially novelizations of a ’70s-era dramatic podcast.

First let’s catch up with the story, such as it is. One day a very British man named Arthur Dent is awakened from his hungover sleep by some slightly rude bulldozers who wish to knock his house down and build an expressway. Arthur is rather put out by this. He finds himself lying down in the mud in front of a bulldozer, although he is quickly interrupted by his friend Ford Prefect. This is a very Euro joke, by the way, because they never released Ford Prefects in the United States. Anyway, Ford manages to convince Arthur to accompany him to the pub for exactly four beers and a packet of peanuts. This is because Ford is an alien, and he has just learned that a crew of bureaucratic aliens have arrived to blow up Earth and build an intergalactic expressway. Lucky for Arthur, Ford has the means to bail before this happens.

After this Arthur is jerked around the galaxy by Ford, and later a charismatic dope named Zaphod Beeblebrox, otherwise known as the president of the galaxy. This cat has stolen a brand new spaceship named the Heart of Gold which is powered by improbability. This is important for a novel based on random nonsense, you see, because Adams can invent pretty much whatever he wants and blame it on the improbability drive. The more unlikely something is, the faster the ship goes. Or something. It’s really not important, as you’re supposed to be giggling to yourself too much to really pay much attention to anything else. And it totally works! For a while.

Sure these mice look cute, but they’re actually a couple of right bloody wankers.

Look, I’m not here to dump on the nearly universally beloved Hitchhiker’s Guide to the Galaxy. For one thing, most of the jokes still work. Honestly, compared to something like Monty Python – which I love – more jokes land than don’t. Let’s be real: for every Spanish Inquisition or Wink-Wink Nudge-Nudge, there’s like ten sketches where I don’t even know what’s happening. Anyway, Hitchhiker’s has that going for it. Nearly as important as being, you know, funny, the book is super short. Before you even have time to start getting annoyed that there aren’t really any sympathetic characters or stakes to speak of, it’s over. Yeah, there’s like nine more books in the series, but you at least get a breather. These books are the sketch comedy of novels.

The reason I’m even writing about something as slight as The Hitchhiker’s Guide to the Galaxy is because, well, I like it and shut up. Oh, and obviously the Earth is destroyed, along with all of humanity save Arthur and Trillian. Arthur is a bit of a sop, and Trillian is a bit full of herself, and probably the best character is Marvin, the clinically depressed robot (although this may because in the movie version Marvin is voiced by Alan Rickman). And he sucks too, although to be fair that’s rather the point of Marvin. Anyway, the human apocalypse is probably the most inconsequential apocalypse imaginable. Literally no one cares, except maybe Arthur and Trillian. And even they seem rather nonplussed about it, although that’s mostly just their Britishness. 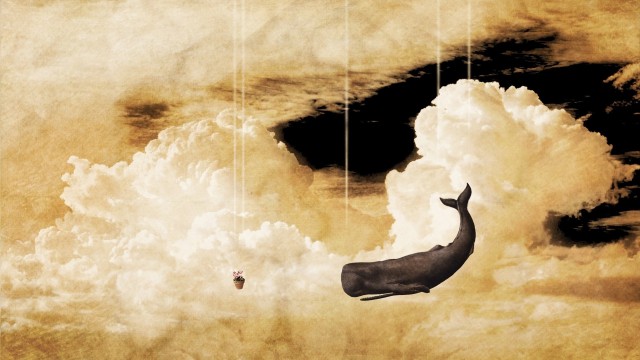 I rarely use fan art around here, but sometimes Google image search really comes through.

Well, to be fair, there are a couple of beings who are invested in the destruction of Earth. Mice care, because their experiment was wrecked up. Uh, it turns out Earth was created in a giant planet-factory and put into place for the sole purpose of discovering the Question. Five minutes before the Question was revealed, the Vogons blew the planet up. The mice, who were running the experiment on humans (get it? Because we thought we were experimenting on them? Bet you didn’t expect that!), are actually pan-dimensional beings who are trying to figure out the Question of Life, The Universe, and Everything.

Perhaps you’ve heard nerds giggle at each other over the number 42? This is where that comes from. Once upon a time there was a giant galactic computer that was asked the vital question: what is the meaning of Life, The Universe and Everything. After millions of years, the computer woke up with the answer, which is 42. They didn’t ask the correct question, you see, and a much smarter computer would be needed to figure it out. Earth was that computer, and now it’s gone. Whoops!

So that’s pretty much The Hitchhiker’s Guide to the Galaxy. There’s more catch-phrases that will turn up as book titles of later entries. Mostly harmless. So long and thanks for all the fish. These tie back into this original story, and despite reading them I don’t really remember them. I’m hoping that’s because I read them a long time ago and