The Book of the New Sun: The Sword of the Lictor

So far, these novels have been equal parts wonder, confusion, and frustration. At this point, I know I’m going to finish them. What I don’t know is if I’m actually enjoying them. After skimming the articles I wrote following the last two books, it occurs to me that when I talk about the Book of the New Sun, I spend most of my time trying to work out the details of what I just read. I don’t expect that to change. Further, these are the kind of books that require a second time through to fully understand what is happening, and boy I don’t think I have that in me. I also have no real desire to poke around the internet and figure it out that way, because that’s no fun and also the internet wasn’t a thing in 1981, when this was published. I guess if you’re a fan of the series you can read these and laugh at me for misunderstanding everything that’s happening while I muddle around and feel stupid. I mean, that’s something I would enjoy doing, probably. I’m not proud of that.

The last book, The Claw of the Conciliator, ended on a scene of chaos which I still don’t quite understand. Part of the reason is that by the end of these fucking things I lose some steam and am just trying to get on with my life already. The other part is that so far, all of these books have ended on a chaotic scene which is purposefully obscure to the reader. This third volume begins like the second, in which the ending of the previous book is very nearly ignored and we begin after a time-skip of indeterminate length. That’s frustrating, but it’s also just how these books work. I may not know what the hell is going on, but I’ve figured out the pattern at least.

Another pattern: each successive volume of this series undermines assumptions made in the previous installment. Sometimes this obfuscation occurs because Severian tends to skip certain details of the narrative, sometimes it happens because Wolfe as a writer muddies the water with meaningless details and borderline incomprehensible archaic diction. Last time out, one of the things Severian did that bugged me was having a brief boat-affair with Jolenta, a sexy actress who is also an ugly ancient witch (???) and always just seems kind of detached and bored. This was bothersome because the story would have us believe that Severian and Dorcas were an item, kind of maybe. Now in this third book, Severian makes an offhand mention that Jolenta and Dorcas were an item, and that Severian hooking up with Jolenta was kind of a revenge-fuck situation, but what-even-ever, who cares! None of this matters! All of this is just me as a reader trying to invent some kind of romantic subplot so that I have some kind of humanity to latch on to. 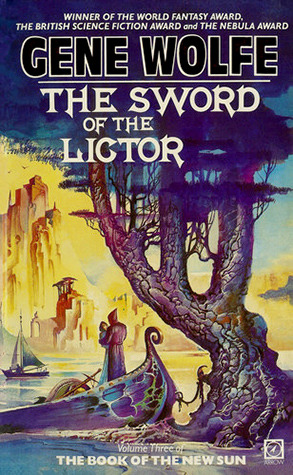 So Dorcas is dead I guess. Not, like, she died and Severian is sad about it. I mean, Severian isn’t sad about anything ever from what I can see. Anyway, Dorcas is dead as in she’s a reanimated corpse. This is not a gross zombie situation, at least I hope it isn’t because while Severian has an intimate relationship with death I doubt he gets his jollies by plowing a cold field, if you get me. Early in Sword of the Lictor she figures this out, and is bummed about it. Dorcas has vague memories of a husband and child, but also has no way of knowing how much time has passed between her death and resurrection. She then makes a decision to leave Severian, which is honestly for the best considering how fucked up that guy is, and to find her lost past down in Nessus. Exeunt Dorcas, for now.

Meanwhile, Severian has a new job, which seems to be the administrator of justice for the fortress-city of Thrax. In typical Severian fashion, he fucks this up pretty much right away. Like he did with Thecla back in the day, he gets hung up on a girl he’s supposed to kill and lets her go. Well, this time the lady actually lives, but you get what I mean. This scene is also described in such a way that I was utterly confused by events until he explains to Dorcas a little later before absconding into the mountains. Like, all he seemed to do was chat some bored housewife up, fuck her, and now he’s running for his life apparently. Also there’s a flame monster. And then I’m thinking, well that husband sure works quickly, but then he finds Dorcas and explains and it’s like, oooh, I get it, that’s a typical Severian move.

While I have specifically avoided places which would explicitly explain the plot, the timeline, the character motivations, and all that other stuff which makes a novel a novel, I have skimmed a few non-spoilery reviews of these books. After my experience with these books so far, I’m very curious about the critical reception. For the most part, it seems overwhelmingly positive. However, here and there I’ve found sentiments that echo mine. Wolfe writes in such a way, with such a dense and layered style, that the first instinct of the reader is to assume that something is up. That the author is holding all the cards and knows secrets that, despite writing all these words, he is unwilling to give up. The very style of the prose and the sheer density of the material here is like catnip to people looking for literary meaning. The worry is that, despite appearances, there’s nothing underneath the layers of text, and subtext, and sub-subtext. Like a bad magician, once you get to the moment of truth, poof! It’s fucking nothing.

We shall see. After all, there’s one more book left. In the meantime, Severian has a few more adventures which will eventually lead him back, I imagine, to the House Absolute. On the run from the Thrax authorities who want to murder him for not murdering the lady, he escapes into the towering Andes Mountains. I think. With the advanced aged of the world, it’s difficult to make assumptions. There are details here and there which allude that the Earth is now tectonically dead, which means that either a vast amount of time has passed or something cataclysmic happened. The answer is probably a combination of the two, although if enough time has passed for the Earth to geologically die naturally, humans should have long since evolved, right? Or maybe our sentience prevents further mutations and natural evolution? I don’t know science. Anyway, it seems like this all takes place in South America.

In the mountains Severian finds shelter in a small hut where it seems Agia from the first novel is still all pissed off and trying to kill him. Unfortunately for her, an Alzabo shows up and interrupts her revenge-murder. If you recall, an Alzabo is a creature which has the super-creepy power of retaining the memories of the ingested. Like, it’ll eat your face and then run around speaking in your own voice to lure out your loved ones so that it can eat them too. The small hut was home to a rustic family, who all end up dying horribly. The Alzabo rolls up speaking in the eaten husband’s voice, and the kid (with the unlikely name of Severian) is all ‘daddy daddy!’ and the monster goes ‘I’ll eat your face and we’ll be together forever’ or at least until the Alzebo poops. I’m not really sure how this all works. The outcome of this encounter is that Agia runs away and everyone else dies except the two Severians. And the big Severian kind of lets the slaughter happen because he was pissed off this terrified housewife didn’t help him out in a fight.

Moving on from this, Severian goes back up into the mountains, which oh by the way are carved to look like huge dudes. Here he finds some fabulous technology because right, this is the distant future. Little Severian dies horribly, fried to a crisp by defensive lasers or something, and big Severian is ostensibly upset by this. Shortly after this, he meets a future-man who I guess has a spaceship and fancies himself Lord of Space and Time and the Whole of the Known Galaxy. He offers Severian mastership of Urth, so long as he pays fealty to him. Instead, Severian kills him. This whole scene is actually a lot cooler than I seem to be giving it credit for. And here’s why these books are such an enigma. As you can probably infer, they frustrate me with their murkiness. Yet Wolfe is capable of writing scenes of fantastic weirdness that just, for lack of a graceful literary term, feel fucking awesome.

Like the others, The Sword of the Lictor ends on a baffling scene of chaos that will almost certainly go unexplained in the next book. There are aliens, and a strange, primitive people that make their home on living islands in a vast lake, and another unlikely encounter with characters from the first novel. Baldanders and Dr. Talos are holed up in a big old castle on the shores of this lake. They seem to be exploiting the locals for their own mysterious ends. Aliens show up. Baldanders… is bad? The aliens peace out, the lake-natives raid the place, Baldanders is kerplunked in the lake and presumed dead even though, come on, he’ll be back. Also the mystical Claw of the Conciliator is broken, save for some weird little bit that Severian makes off with. Considering Severian’s quest has been to return this thing to whence it came, that’s a bit of a bummer. But really, who even knows.

That’s your subtitle for the last book. The Book of the New Sun: Who Even Knows.

Jump to the rest of the series: The Shadow of the Torturer; The Claw of the Conciliator; The Citadel of the Autarch

Like Loading...
This entry was posted in Book of the New Sun, Books, Entropy. Bookmark the permalink.

7 Responses to The Book of the New Sun: The Sword of the Lictor