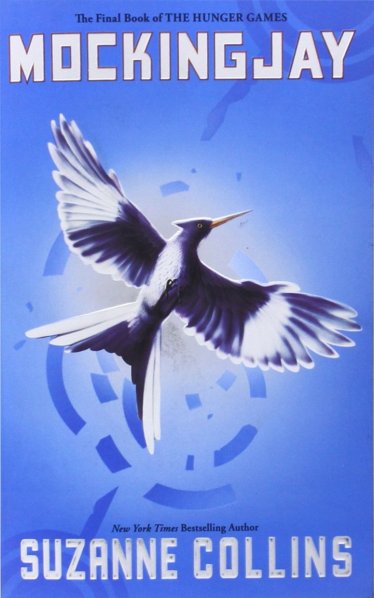 It’s about time. After the stark brilliance and efficient world-building of The Hunger Games, and the competent variation on the theme that was Catching Fire, shit finally goes down. The televised murder-sports are done with, because the revolution has caught up with the Capitol. At the end of Catching Fire, Katniss is dimly aware that she’s been used by the resistance, the rebels of District 13. She is plucked from the arena of the Quarter Quell along with a few of her allies while is-he-or-isn’t-he-boyfriend-with-a-dumb-name Peeta is in the hands of the Capitol. It turns out that Plutarch Heavensbee was a traitor to the Capitol and was able to orchestrate the escape of Katniss and a few of her buddies. Mockingjay begins in the ashes of District 12, with Katniss wandering the rubble and ruin of her old home. It would be fair to say that she is somewhat distraught over this.

Considering this is the third entry of an extraordinarily popular trilogy, I will therefore assume that you’ve read this thing.

For a novel that begins with the protagonist wandering around the ashes and ruin of her home, kicking skulls around and whatnot, Mockingjay doesn’t exactly get any more cheerful as the story moves along. This is not to say that these books have ever been anything but dire and horrifying, of course. Yet it is with this finale that the entire concept of the Arena is discarded in favor for a full-scale revolution, which has been in the offing since pretty much the beginning. Obviously, the Arena becomes the wider world, and the participants are now extended to include everyone. These are the real Hunger Games, you guys! I’m sorry for that, I don’t mean to be overly glib about what is a rough, rough book. It’s easy to overlook, at times, that Katniss Everdeen is still underage, a child. So far, she’s had to survive and kill so that she and those she loves can live. That kind of thing will make a sudden adult out of anyone. As Mockingjay proceeds, her life only becomes worse.

The opening scenes of the novel illustrate Katniss’ defense mechanism, which is to totally shut down. She feels like an abject failure, having lost Peeta to the Capitol. Meanwhile the leader of the resistance, President Coin, is unsettling in a “meet the new boss, same as the old boss” kind of way. Living in District 13 sucks. They’re a militarized society, not quite a dictatorship, which lives by tight discipline and exacting social rules. Katniss, who is chaotic good and needs room to roam do her thing, is completely and totally constrained. This, of course, makes her all the more unhappy and all the more miserable to read about since we’re in her head all the time. There’s a fine line with this kind of narrative. For the most part, Collins does an excellent job of balancing the need for us to understand and empathize with how terrible things are for Katniss and not drowning the reader in the quagmire of her endless, circular, bummer-ass thoughts. Katniss’ spiral of depression and anxiety is not exactly fun to read, but it’s moderated enough that it doesn’t dominate the story.

Eventually, Katniss bounces back enough to be a more active participant in her own life, and therefore that of the District 13 and the revolution. Once again, Katniss finds herself at the mercy of a group of people trying to dictate her life, and there we come upon the crux of the entire trilogy. The Hunger Games, as a whole, is about the power of the image, of the symbol. It’s less about a singular hero rising up from anonymity to topple the empire than it is about how the empire is toppled by the same tools it has been using to repress. What? Okay, the Hunger Games are all about symbolized repression, right? The Capitol won the civil war back in the day, and in an effort to avoid another costly war, they doubled down on their repressive efforts. That’s where all the totalitarian mechanisms come in: secret police, overt repressive military presence, blanket media and surveillance, and of course a system of tribute in the form of the Hunger Games. In addition of handing over all their natural resources to the Capitol, they must also sacrifice two of their children as a symbol of their acquiescence to the Capitol’s power.

As we saw in those first two books, the Capitol’s greatest power is spectacle. Yeah, sure they have nukes and lots of impressive weaponry, but that kind of thing can only take you so far. We later learn that District 13 also has nukes and impressive weaponry, but they lack the optics. The Capitol, above ground and all that, have perfected the art of symbolic repression. It seems like as much attention is focused on the preparation of Katniss for the Games than is given to the violence and action of the Games themselves. Cinna, Katniss’ fabulous stylist, is a major character not only because he befriends Katniss, but because he fully understands the power of presentation and spectacle. Katniss, who is by turns obstinate, surly, cagey, noble, brave, and a bit stupid, is not a prime candidate for a rebel leader. Cinna, however, has the knowledge and ability to transform this raw product into a symbol of great power. Alas, he pays for this transformation with his life.

Cinna isn’t the only one to sacrifice his life for the cause, of course. The end of the novel is a bloodbath, so I hope you didn’t get too attached to any particular side character. But of course you did, alas poor Finnick, I hardly knew thee. Yet all these noble sacrifices by the determined and dutiful members of the resistance are only possible because of the Mockingjay, the symbol of the movement. Before Katniss is even really aware of it, she finds herself in the hands of stylists and being photographed doing empty things in front of a camera for optics, for image, for symbolism. A woman of action, this doesn’t sit well with Katniss. She wants to take her bow and place some arrows in the eyeballs of her enemy. As we’ve all learned by now, Katniss does not do scripted particularly well. This is a lesson that Plutarch learns eventually, but she’s most effective when she can improvise. Of course, even if she is doing something useful, they’re still careful to artfully repackage her actions as spectacle, in order to effectively sway the public.

I see no real reason to write about the films since they hew pretty close to the source material. Still annoyed about the two-movie finale though. Please stop this.

Throughout Mockingjay, the reader is likely aware that the Capitol is going fall. I mean, of course it is. That’s been telegraphed from the beginning. If all Mockingjay did was depict the final rebellion, the trilogy would have felt like a let-down. Sure the action is exciting and there’s the built-in drama of which of the secondary characters are going to make it through the big set-piece ending. Also, if you’re into that kind of thing, there’s the ever-present who-will-she-pick love triangle. For all that, if Collins played it straight, we’d end up with a perfectly okay story about the overthrow of an evil empire. Collins is better than that, however, and from our introduction to District 13 we are aware that the revolution is teetering on the edge of a crisis.

Earlier, I mentioned President Coin, the leader of District 13 and thus the rebel forces. I also mentioned The Who’s “Won’t Get Fooled Again,” because Coin, despite ostensibly representing an oppressed people, is able and willing to adopt the tactics of her enemies to assert her own power. Her ruthlessness is what enables her keep control over District 13, which in turn assures their independence and ability to challenge the Capitol in the first place, so it’s hard to argue that Coin is ineffective. After all, they win the war. They win the war because they are able to leverage their media imagery, led by Katniss as the Mockingjay, to incite the greater numbers in the Districts to overthrow Capitol forces. The question, and the major source of conflict and drama, then becomes: how will the rebels organize society now that the oppressors have been overthrown? What kind of leader will President Coin become now that she’s overthrown the obviously evil President Snow?

President Coin turns out to be every bit as horrible and evil as President Snow. Not only does she murder a bunch of clearly defenseless children, she also murders Katniss’ sister, Prim. Why? Image. Optics. Spectacle. Meet the new boss, same as the old boss. This is an action that we’ve come to take for granted when done by the Capitol, but it comes as something of a shock when it is revealed that Coin is responsible. Well, it should but it doesn’t because this turn has been set up so well by Collins. After the children-bomb effectively ends the war, Coin floats the idea that one last Hunger Games should be held, using Capitol children. Peeta flips out at this suggestion, of course, but the Mockingjay assents. Of course Katniss, being Katniss, has no intention of agreeing to such a blatant return to the status quo. Instead of shooting President Snow in cold blood, she assassinates President Coin.

In the end, we’re not given much of an insight into the new society that is built on the bones of the old. It is clear that Katniss, even though she is acquitted, will have no role in the leadership. All we are given is a short speech by Plutarch where he says:

“Now we’re in that sweet period where everyone agrees that our recent horrors should never be repeated…. But collective thinking is usually short lived. We’re fickle, stupid beings with poor memories and a great gift for self-destruction. Although who knows? Maybe this will be it, Kaniss…. The time it sticks. Maybe we are witnessing the evolution of the human race. Think about that.”

Maybe, but probably not. As for Katniss, this is by no means a happily-ever-after scenario. Sure, she gets a good man in Peeta, and a home without violence, and eventually some kids. Yet the shadow of the Capitol and what Snow and Coin did to Katniss will never fade. I appreciate that Collins resisted the urge to put a bow on the results of the revolution and call it all good. The Hunger Games has never been a particularly optimistic series, and such an ending would have been jarring and strange. Instead, the trilogy ends as it should: Katniss Everdeen is alive, if not entirely well, and the Mockingjay is dead and no longer needed. The world is still grim, but life goes on, and this time there is at least a glimmer of hope for a better future. It’s not much, but it’ll have to do.