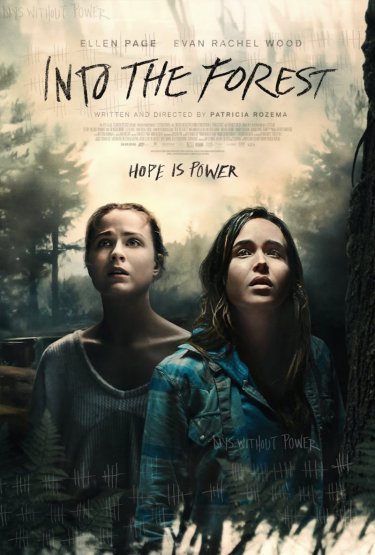 It was either this or Armageddon. I mean, there are always other choices. I could have watched Finding Dory and figured out a way to make a story about a forgetful fish fit my project. I am particularly adept at finding apocalyptic themes in pretty much anything, after all. Still, there are a few stones left unturned in the streaming service field, and these were two of them. On the one hand, a new film that I vaguely remember hearing about starring Ellen Page taking place in a Northwest rainforest (actually, it’s clearly British Columbia, which makes it the Southwest. Of Canada). On the other hand, an older film I’ve totally seen before starring Affleck and Bruce Willis taking place in space. The former had a shorter running time than the latter, so I chose against Bruce Willis. I chose poorly.

The apocalypse of Into the Forest is an indefinite, nationwide power outage. That’s it. No comet, no nukes, no plague. Just, for some unknown reason, the lights go out. Now that’s actually a pretty good premise, but the film isn’t terribly interested in it. The power outage is a means to isolate the two sisters at the heart of the story. One is a smart high-schooler, studying for her SAT’s when she’s not drinking at the beach with her dopey lookin’ boyfriend. The other sister is a dancer. That’s their characters. They live with their father in a fancy house deep in the forest. Shortly after the power goes out, the trio takes a trip into town, which is in a state of controlled chaos. The stores are pretty much wiped out and gas is in short supply. We meet a sinister shopkeep, a few locals with guns, and the dopey boyfriend. And then it’s back to the house, where the rest of the film takes place.

Since the film is about the relationship of these two sisters, the father must be disposed of for plot reasons. He has an accident with a chainsaw and promptly croakboats. On their own, the sisters must manage their resources and try to figure out how to survive until the lights come back on. If that sounds interesting to you, I have some bad news, because until a particular scene later on in the film, all of their conflict is dumb as balls. Like, the most divisive argument between the sisters is over whether or not Sister B can use some of their precious gasoline to power a generator so she can have some music to dance to. Seriously. That’s actually the moment where I was done being invested in the story. I watched it all, but I stopped caring even a little bit after this scene played out. “I need to dance!” Fuck you.

That’s the crux of my problem with this dumb movie. Into the Forest is one of these transcendently mediocre movies. It’s not bad. It’s not good. It just is, and ugh I have other things I could be doing. So I will not lie to you, dear reader, I checked out around 45 minutes into this thing. I didn’t turn it off, I just picked up a tablet and stopped giving it 100% of my attention. It maybe had like 65%. I could tell you major story beats, it’s pretty clear what the filmmakers were going for, I just don’t care. The characters are well acted, but what they were saying and doing was just crushingly dull. It’s not a good sign when civilization collapses on screen and my instinct is to see what’s happening on Twitter instead. If I’m going to watch society crumble, it might as well be my own.

I’m annoyed that the premise of this apocalypse was totally wasted, because the idea of a total power outage and its effects on society is a sound one. I bet that would be really bad! Near the end, Sister A makes the observation that out of 15,000 years or so of human existence, we’ve only had electricity for 140 years (for some reason this film is a near-future tale, which is conveyed with some fancy gadgets before the power goes out). She’s basically setting up a premise for a far more engaging film. What happens to a civilization that is totally dependent on their electrical infrastructure? How many people would be prepared for producing their own food and building their own shelter and all that good stuff? Technology has moved so quickly, vast swaths of the population have forgotten the basic understanding of survival. The larger a civilization grows, the more abstracted the act of living becomes. We need to eat, but we don’t grow food. We don’t even build anything to trade for food. We generally provide a service to some abstract entity to earn abstracted currency to trade for food. It’s levels upon levels of abstraction, which renders us pretty much helpless if all those systems collapse.

Into the Forest doesn’t care about any of that. Instead we get one sister bummed because she can’t dance properly, and another sister who has sex with her dopey boyfriend in a stump while they slowly work their way through their stock of canned goods. They show very little interest in figuring out how to maintain their resources, and it takes months before they figure out how to start foraging and hunting in the vast forest which surrounds them. There is no news about the outside world, which drastically reduces the scope of the apocalypse. In fact, after the only trip into town, only two other characters show up. The first, the aforementioned dopey boyfriend, appears because he wants to bang his sorta-girlfriend. Understandable. After this, however, he has the idea of traveling east because of rumors about the power being back on over there. This is all very tenuous and eventually he leaves alone. Then the other guy shows up.

Ellen Paige’s character, Sister A, seen here looking cooler than she actually is.

Look, the apocalypse brings out the monsters deep within some people. It’s a staple of apocalyptic fiction to explore this darkness. I mean, The Road is pretty much just that. The problem here is that for most of its time, Into the Forest doesn’t deal with other people at all. The sisters are isolated, and there is an occasional allusion to how scary the big empty woods are, but for the most part the film is about the mundane stress of figuring out how to live alone in the forest. Then, out of fucking nowhere, the creepy store clerk from way early in the film shows up and rapes the dancing sister and bounces, never to be seen again. And I’m sorry, movie, but fuck you. Either have your story be about two sisters coping in the wilderness, or make a story about the effects of the apocalypse, but don’t just randomly pull an element from one possible film and jam it in your own boring narrative to spice it up. It feels exploitative and pointless, a mean stunt to pull just so you can introduce the final stupid element to the story.

That stupid element is the baby, which sets up a dumb ending. Suddenly the back third of the film is about dealing with sexual assault, which is not what I signed up for, and like I’ve pointed out has nothing at all to do with what the film is initially about. By the end of the film, it’s clear that the power isn’t coming back. No other people ever show up, and it’s just the two sisters, one of whom is pregnant with a rapist’s baby. She wants to keep said baby because she doesn’t want to lose anything else. Okay. So the baby is born and the house falls down (suddenly, for unexplained reasons), and the new mother’s response? Burn it down. Why? So bad mens don’t try living there. What’s the plan going forward? To live in the sex-stump from earlier and raise the child in the woods. Are you kidding me?

No, seriously, are you kidding me? Is this just a long, boring joke with a bad punchline? I guess so, and I think I’ve already spent more than enough of my time thinking about it. The lesson here is simple: never choose against Bruce Willis.