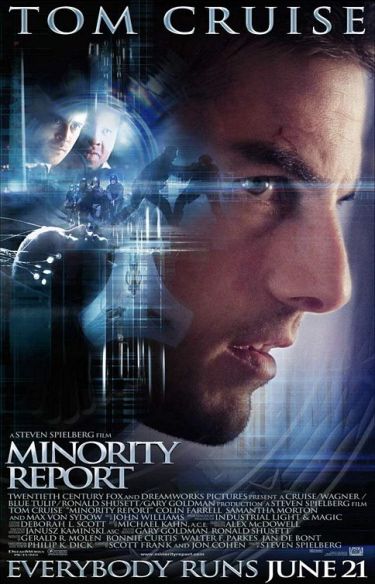 To my great shame, I’ve never read the Philip K. Dick short story this film is based on. To my even greater shame, I’ve never ready any Philip K. Dick. This is for a very petty reason. You see, I don’t think I’ve ever seen a book of his priced for less than fifteen dollars. Not at Powell’s, not at any of my local hole-in-the-wall used book stores, nowhere. It’s like there’s this unspoken agreement not to sell any of his works for under a fixed price, and I for one won’t be a party to this kind of economic collusion! Also, as a value proposition, fifteen bucks for a story that will take me 90 minutes to read is pretty weak, considering my shelves at home are creaking with thousands of unread pages already. So get over yourselves, The Esteemed Estate of Mr. Dick, I’ll just watch the movie. I’m sure it’s basically the same thing.

With that disclaimer out of the way, let’s take a look at this film, which I was astounded to realize was released fourteen years ago. Minority Report still looks pretty good! Obviously it helps to have the combined weight of Speilberg and the LucasArts machine on your side. It is also another reminder that Tom Cruise is a Great Hollywood Vampire, and should probably be staked if he weren’t just so danged handsome. Yet here he is, this time as Tom Cruise Action Man (as opposed to Tom Cruise Romance Man, or Tom Cruise Drama Man), in a film that holds up pretty well as an entertaining action movie. In addition to this, Minority Report also manages to present a blandly horrifying future that asks all sorts of troubling questions of its audience, should they be able to tear their eyes away from the undead dreamboat on screen.

These are the precogs, who spend most of the movie chilling in this spa.

The story takes place in the year of 2054, and the world is exceedingly white. I don’t mean, like, honkies. I mean the aesthetic. Buildings, both interior and exterior, are all brightly illuminated facades of marble and glass. All manner of zippy future machines inhabit this world, and the very structure of society seems just a little off. This is the paradox of the utopia/dystopia. The world of Minority Report is a Washington D.C. in which murder is nonexistent. That sounds pretty good, right? John Anderton (Tom Cruise Action Man) is the chief of a police division known as “Precrime.” Their primary asset is a group of three people who are known as “Precogs.” These people have a genetic abnormality which allows them to see into the future. This precognition is very specific as it only pertains to homicide. The police have hooked these three folks into a fancy future-computer which allows the Precrime unit to essentially view the future, which allows them to arrest the murderer before the crime occurs.

“Now wait just a minute,” you say, seeing the inherent violation of every Constitutional right that this scenario presents. Oh, but the film has an answer for you before you have a chance to object. The Precogs have been proven to be correct, 100% of the time. They are infallible, they are always right. Since they are always right, and given the opportunity the murders will absolutely occur, then by knowing the future the police are within their rights to prevent that crime by intervening. Thus changing the future. Obviously this all sets up tricky questions about destiny versus predetermination, and that’s the crux of the film.

Chief Anderton is very good at his job. So good, in fact, that there hasn’t been a homicide in the nation’s capital for four years. His success is so great that the government wants to take his program nationwide, thus ending the menace of homicide forever (the logistics of this are never explained, so don’t think about it too hard. But I mean, how can three people have enough time in the world to have elaborate visions of the 16,000 murders (2002 number) that happen nationwide? I did math (!!) and that’s like two minutes per murder, which I don’t know, doesn’t seem like a lot of time to get enough detail to solve every homicide, also why put Ice T out of work?). Everything is going great for Anderton, until they aren’t.

The future of advertising: in which we allow corporations to scan our biometrics at any time in order to better sell us things.

The conflict of the film occurs when John Anderton is shown a precognition event in which he is the murderer. Of course, what else is going to happen? Anderton bails, knowing that he cannot possibly be a killer. Besides, he doesn’t even know the victim. Yet because of the law, the one he previously enforced so vigorously, he must run (“Everyone runs.” So true, Tom). That’s the rest of the film. Tom Cruise Action Man runs and runs until he finally comes to the moment of crisis and is given a revelation. In the course of his running, he basically kidnaps one of the precogs. When it comes to the moment of the predetermined murder, he is given a choice. Because he knows the future, he is given the power to choose. Once the scenario unfolds, Anderton’s murderous desire becomes truth. Yet because of his own pre-knowledge, he is able to overcome his emotion and put the gun down.

This decision, of course, underscores the problematic aspect of the very notion of “precrime.” The film demonstrates that destiny and free will can co-exist, but free will depends on knowledge of one’s destiny. The very premise of the Precrime division is to change the future. The flaw is in the execution. Instead of arresting the non-murderer, why not simply intervene and evaluate the would-be perpetrator? The answer is relatively simple, and that’s because the system works. Homicide is eradicated because the system, and whatever philosophical reservations one might have about it, functions as designed. Therefore the real question Minority Report asks is even more fundamental: which is more important, safety or freedom?

There is no question that rights have been violated in order to build a safer urban environment (not perfectly safe, mind you, as the movie states that the precogs only see murder, not rape or assault or armed robbery). The rights of the precogs, first and foremost, have been completely stripped. They’re treated as machines rather than United States citizens, almost assuredly against their will. What are the lives of three invalids weighed against those saved? That’s a tricky one too. This is an idealistic film, however, and the movie comes down pretty hard on the side of personal freedom. Given the choice, the precogs would rather not live their lives forcibly submerged in some kind of future-goo saving the lives of a bunch of people they don’t even know. They would rather chill on some island off of Maine, reading Bridget Jones novels or whatever. 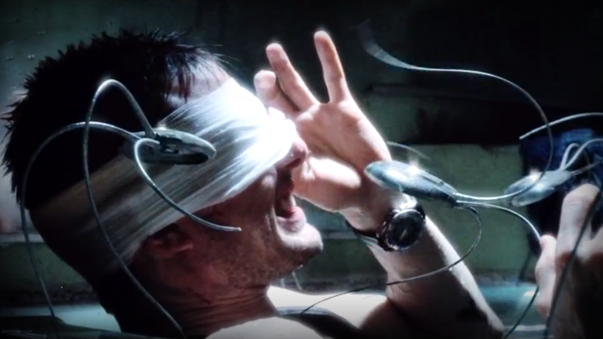 Also we’re okay with these creepy little things crawling around our house and watching us get it on.

Then there are the rights of the accused. These are fundamental to our Republic, but they are troublesome. Some films pointedly ask: what about the rights of the victims? Minority Reports sets up a situation in which the rights of the victims are addressed, and non-violently (unlike a certain unclean Harold). The problem is, of course, now violence is being done to the accused. Their freedom is wholly suspended, and they are put in a jail-tube for the crime of intent. For most people, this is a fair trade. The neat and tidy way the film ends is disingenuous, and robs the audience of this discussion. For the sake of simplicity, Minority Report ends with the assumption that the public would be aghast that people’s rights have been stripped away on the pretense of safety. Because the precogs are shown to be fallible, it is assumed that the general public would reject the overall positive results. That’s naïve at best. This conclusion overlooks real world situations in which voters uphold the death penalty, despite having to know that every once in a while an innocent person is put to death. Ask anyone if they think our current justice system is infallible. Prepare to wait a while for the laugher to die down.

Minority Report cheats its own question by providing a pat conclusion. That’s fine, this is a summer action movie and I’m not necessarily looking for a deep conversation here. That said, the film does ask questions. Perhaps more horrifying and dystopian than all this stuff about magic precogs and whatnot is the technology on display throughout the film. The population seems totally okay with having their eyeballs scanned every thirty seconds for purposes ranging from security and surveillance to personalized advertising. People totally take for granted that occasionally their sexy times will be interrupted by horrible little bug-bots who crawl into their beds in order to scan them for wrongdoing. They’re totally fine being harangued by AI holographs shilling for Lexus or The Gap every time they step on the damn subway. If the population is okay with all of these abrasive and obvious intrusions of privacy, what are the odds they’ll care about a few wrongfully accused murderers?