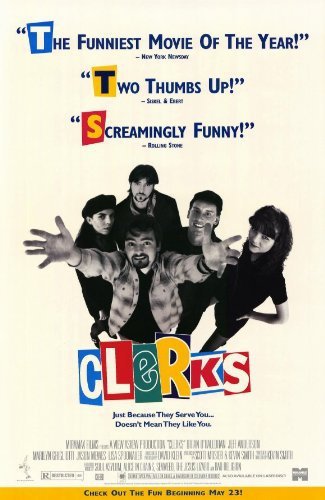 Clerks is as pure an example of American life in 1994 as can be found. This is Peak Nineties right here, from the music to the fashion to the worldview. This time capsule quality to the film is enhanced by the fact that the movie was written, directed, and made by a total amateur, and for the most part was acted by his friends and other various townies, all for like $200,000. It’s a grainy, black and white snapshot of mid-90s suburbia. It’s also a showcase of almost-but-not-quite natural dialogue. I’ve had most of these conversations in one way or another, and yes people actually talk like this sometimes, with the exception that many of those conversations directly quoted this movie. Or The Simpsons. Or any number of other pop culture references that weave their way into daily speech, not unlike the Star Wars aside in Clerks. Obviously the dialogue is stylized and enhanced, and at various times throughout the film the amateur-hour actors stumble over the verbose nature of the lines. That’s all fine, because here we are more than 20 years later and I still identify with pretty much everything here. I love this dumb movie a little more every time I see it.

If you are unfamiliar with the film, the premise is incredibly basic. The protagonist is a 22 year old convenience store clerk with the unlikely name Dante. He enjoys flannel and tucking his pants into his boots because 1994. Anyway, it’s Dante’s day off but he gets called into work and he agrees because it is Dante’s nature to be agreeable. The film is simply a day with Dante while he works his bad job. His bestie, Randal, works at the video store (1994!) next door, who spends more time bullshitting with his buddy than actually doing work. This day is, however, not exactly typical, and some random silly things happen over the course of the movie. Most of these things serve to move the actors around a little, because otherwise they’re just some kids hanging out and that’s not always super interesting.

You know I’m your hero.

To be fair, there is a character arc here, as well as some emotional drama. This is because Dante is something of a putz. He’s whiny, he complains constantly, and can’t seem to figure out why his life is so mediocre.  Yet for all this, he finds himself in the middle of a love triangle of sorts. His current girlfriend, Veronica, is smart and self-assured. She’s also clearly devoted to this dumbass. Meanwhile, Dante is attracted to his old high school girlfriend, Caitlin Bree, who spent most of their five years together cheating on him. She is also smart and self-assured, but her motives for wanting to reconnect with Dante are never very clear. This story plays out throughout Clerks, and the inherent conflict resonates throughout the film.

Really, though, Dante’s situation is what Clerks is all about. Yes, he bitches and moans and complains throughout the movie, which can get a little tiresome. But he’s a frustrated dude. He’s smarter than your average Jersey suburbanite (and make no mistake, this movie may as well be titled Jersey AF), and is cursed with a good deal of self-awareness. Dante should be college. He should have ambitions beyond working the counter of some hole-in-the-wall corner store. Clerks is about why a guy like Dante is such a spectacular underachiever. Most of the answer is, of course, due to Dante’s character flaws. And you bet I identify with a good many of those. However, there’s more to Dante’s ennui than lack of ambition, and it has always been pretty clear to me that some of the problem is suburbia itself.

The world of Clerks is a dour expanse of concrete and fluorescent lighting. Linoleum and cheap fixtures. It’s the retail environment, which I am certainly well-versed in. Stripped of humanity, Clerks presents a soulless hellscape of late-stage capitalism, all shot in grainy black and white. Even with the addition of people, the characters that drift through the film are all either dickheads or weirdos. Or both. The first customer of the day is a conman who turns Dante’s customers against him for personal gain. Throughout the film, Dante and Randal are subjected to hostility, of both passive and active natures. Other people manage to lend a feeling of oppression by either being stupid, or just plain strange. Most of the film takes place in a dim, dingy cave of a store, which gives the film a claustrophobic feel, especially when things start to go sideways. It occurs to me that I should point out this film is a comedy.

If you removed all the dick jokes and absurdities, Clerks would be a grim movie. It’s a film about wasted youth, wasted talent, and wasted time. It’s a film about a man who will never live up to his potential, and lives in an environment which almost ensures his failure. This is not a gritty film about the inner city, where the scrappy, ambitious youth claws his way out of the gutter and exploits his talent to achieve riches and personal prestige. Dante seemingly has every advantage. Yet the suburbs represent their own, more subtle danger to those of above-average intelligence and ability. It’s the threat of comfortable mediocrity. The suburbs (or an independent small city, proximity to a large city isn’t absolutely necessary) are an expression of averageness. The punishment for the failure to achieve one’s potential is not exactly dire. You can live, you can love, you can play hockey and listen to Soul Asylum. Day to day, there isn’t really anything to complain about. 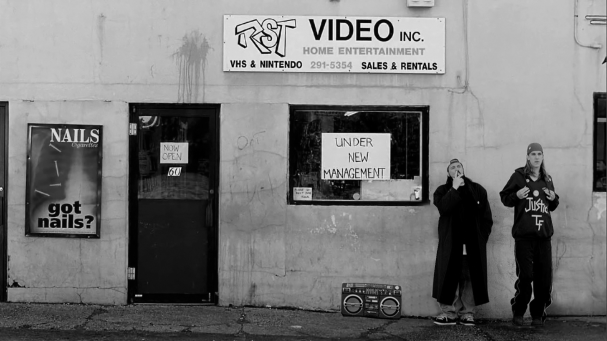 Yet there is still a sense of disaffection with the world that resonates throughout the movie. Randal claims that he’s at peace with his place in the world, yet he spends most of his time lashing out at various customers. The only two people who seem totally satisfied with themselves are Jay and Silent Bob, who sell weed and are hilarious dirtbags. It’s this general disaffection that emanates from suburbia, which is expressed in this film through sheer greyness. In another place and time, Dante could be a person of significance. Yet the suburbs offer Dante enough peace and comfort that there is no real reason for him to try.  I mean, he sleeps in a closet, but this seems to be by choice. The only obstacle between Dante and achieving his potential are his own personal limitations. There are no hardships to overcome, nothing tangible standing between him and achievement. The suburbs don’t push people. They absorb them.

Of course, the mere fact that this movie exists proves that the black hole of comfortable mediocrity isn’t absolute. Kevin Smith was a suburbanite nobody with dim ambitions of being a filmmaker before Clerks. He maxed out some credit cards and leaned heavily on his friends, but the ambition was his. Unlike Dante, Smith recognized that comfort isn’t always desirable and risked his financial future for a passion project. It worked out for him. Within the film, both Veronica and Caitlin are depicted as strong, ambitious women. Now, since they’re really only important to the story to magnify Dante’s own ineffectualness, we’re not really told what their ambitions are. They’re both getting an education, and are meant to be a juxtaposition to Dante and Randal. Yet outside of these two – one who left and came back and the other who is visiting – the residents of Leonardo, New Jersey all seem to have succumbed to the sleepy trance of the suburbs. It’s a good thing the dick jokes deliver – 37! – otherwise this movie would be depressing as hell.

On the other hand:

“This job would be great if it wasn’t for the fucking customers.”

“I don’t appreciate your ruse, ma’am.”

“Title does not dictate behavior.”

“Silent Bob, you’re a rude motherfucker, you know that? But you’re cute as hell.”

“Try not to suck any dick on the way through the parking lot! Hey, get back here!”

“I could never reach.”

“…which means the video store is ostensibly closed.”