Posted on December 6, 2016 by apocalypedia 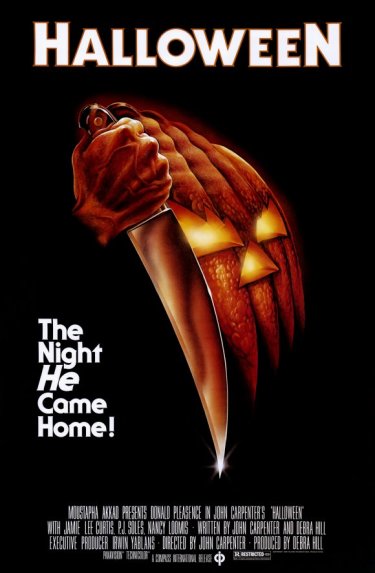 It took me a while to decide whether or not this film fits my purview. Then I realized that, as a certified Master of Arts, I can make art do whatever I want. At least, I’m pretty sure that’s what it means. If not I should probably get my money back. Anyway, while Halloween is obviously a horror flick – the prototypical slasher movie, in fact – it seems that there is enough commentary on the postmodern year of 1978 to warrant discussion about social reactions to major cultural changes. So there. Having justified myself to myself, let’s take a look at this weird little movie.

The story of Halloween is very simple. The film opens in 1963 with some obnoxious teens. The entire scene is filmed from a first-person viewpoint and follows said teens as they dry hump each other on the world’s ugliest couch. Shortly thereafter, they decide to bone. This takes all of thirty seconds, because they are teens. The camera moves excruciatingly slowly up the stairs to see the teen girl doing her hair topless in her underpants, because that’s what girls obviously do after an underwhelming sexual experience. She is then stabbed. Moments after this, the viewpoint is revealed to be that of a small child in a clown costume and a blank expression. We move to present day: the dim, distant year of 1978.

The film is comprised of a lot of slow, long shots which follow the various characters around as we get a sketch of Myers as a silent, creepy weirdo. Myers returns to his abandoned childhood home, and then cruises the sleepy streets of Pasadena Haddonfield, Illinois, apparently stalking Laurie (Curtis) as she goes about her teen day. Halloween is a film that takes its time, and spends a good deal of it contrasting normality with impending horror. Much of the film is simply teenagers being excited for Halloween. Except Laurie, our heroine, who seems to be a bit more drab. Still, she is a little more with it than her peers, who are all more preoccupied with beer and bonin’ than anything else.

Eventually, of course, Myers goes on a stabbing spree. Laurie, who is spending her evening babysitting a couple of doofy kids, realizes that some bad shit is going down. This awareness is just enough to keep her from meeting the same grizzly fate as her dippy friends, although not quite enough to keep her from getting jacked up pretty good. Also she basically lures Myers to the house with two young children in it, so well done, dummy. Whatever, though, because Laurie is equipped to fight back. She repels Myers’ Terminator-esque attacks and manages to live long enough for Dr. Loomis to bust in and shoot her attacker. But get this, he’s not dead! Now that I’ve spoiled all of the secrets of the film – because you didn’t expect Michael Myers to kill some people and for Laurie to live – I can take a brief look at what else Halloween is doing.

In the interest of transparency, I don’t tend to do much secondary research on the things I write about. I mean, I’ll look up relevant objective facts like publication dates and how to spell character names, but other than that these write-ups are intended to be a ‘first reaction’ sort of deal. Remember English classes where the teacher/professor was out of ideas and just had you write one page journal entries on stuff? Like that. Basically, I’m not trying to quote secondary sources up in here. All that said, sometimes I see little trivia bits about movies or books that make for a good place to enter a discussion. With Halloween, it’s director John Carpenter’s response to the notion that virginity is somehow Laurie’s shield when dealing with Myers. Essentially, Carpenter didn’t seem to realize that Laurie was the only teen not actively fucking/about to fuck. Like, why would that even matter?

The popular criticism of the film (and others that would follow the slasher template, such as Friday the 13th) is that teenage sexuality is a death sentence. You can interpret this in a number of ways, from weird Puritanical readings to fear of AIDS. In Halloween, the motives of Myers are hazy. He doesn’t seem to have any preference to murder sexually active kids. In fact, if he targets anyone, it’s Laurie. The others are just collateral damage. Meanwhile, while it’s heavily implied that Laurie is a virgin, it’s not like she’s a paragon of virtue or anything. She appears to have significant social anxiety, which limits her opportunities to get her freak on. Her virginity, then, would not necessarily be a result of her intention. This speculation is based on the scene where Laurie and her extrovert friend are cruising the mean streets of definitely not Southern California, blowing hella Zig Zag smoke, takin’ another sip of the potion hittin’ that three wheel motion. Laurie is a gangster, is what I’m saying. Representing the LBC. Michael Myers tried to hit em up for a 211, fucked around and got caught up in a 187. Word. 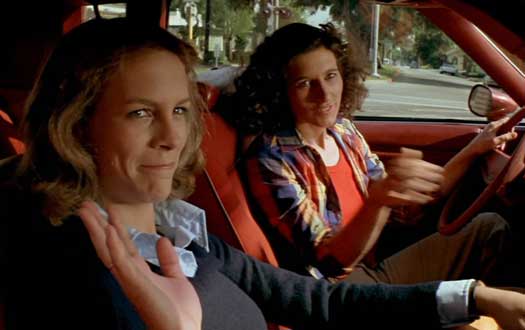 Word to the mothafucking streets!

What was I talking about? Oh right, Laurie not necessarily being the Pure Young Talisman that is immune to stabbing. Carpenter, when informed of this notion that only the virgin survives, was practical about it and noted that the reason the other teens died so horribly is because they were distracted. Fair enough. Culturally, however, it’s important to note that before the seventies, the suggestion that teens have sex would have been scandalous. Here, it is a matter of course. Like, obviously teenagers enjoy drinking and fucking. Everyone enjoys drinking and fucking! They’re super fun activities, doubly so for teens, who are just figuring all this stuff out. Yet American culture – and Western culture(s) in general – have been undergoing significant fundamental changes quickly. So quickly, in fact, that seeing even obvious things like teens being dumb hedonists can come as a shock when stated plainly. This shock can be easily woven into some kind of morality narrative.

We’ve seen over and over again how the rapidly progressing technology, economy, and communication of the late 19th and early 20th centuries have had an unprecedented impact on society. Such enormous and unfettered growth of the population and the rapid increase in quality of life have allowed for a loosening of cultural taboos and aversions. You can look so something like Lady Chatterly’s Lover to get an idea of what the broader picture looks like. Halloween is not exactly the 1978 version of that D.H. Lawrence classic, but the film is a logical extension of what that novel accomplished. Carpenter wanted to tell a scary story in a realistic, contemporary setting. While he was free to depict teenagers in their natural setting, it makes sense that some aspect of the audience would think that the murders represented some sort of ‘punishment’ for the sins of the youth.