This is a series of comics with a super dumb name. Look, titles are hard. I get it. But man, it is difficult to take something like this seriously when the first-look synopsis is “oh, he’s a guy who, like, murders everyone.” So edgy, so dark. It would be easy to dismiss this thing as just that: the frantic ramblings and erratic drawings of a try-hard edgelord looking to sell books in a Hot Topic to other suburban dwelling angst-monsters. And to a point, you’d probably be okay making that assumption. I did, in fact, pick this up in a Hot Topic when I was the age of this book’s demographic. There are many significant issues with the work, even if you do give it a proper chance beyond the immediate subject matter. Still, this is a guy who refined his shit and then made Invader Zim, so it’s also fair to note some successes that JtHM manages to pull off. There are a few.

The story, obviously, is about a 20ish year old loner named Johnny – or ‘Nny,’ because you weren’t expecting that, were you? Anyway, he’s a serial killer who doesn’t act like an actual serial killer. He kills widely and violently, and often indiscriminately. When justification is given, it’s usually because the victim is a garden-variety douchebag and when Johnny tries to explain why he chooses certain people to torture and kill it all tends to sound like so much bully-revenging. Further, there is a supernatural element to the proceedings, and Johnny is given some kind of cosmic protection. As such, he seems unable to die and he is never caught. He lives in a creepy little house than turns out to have an endless horror-labyrinth beneath it. Also a doom-wall that he must keep wet with human blood to prevent a world-eating demon from escaping. Or something like that.

If all that sounds like a big, groan-worthy mess, well, it certainly can be. There are a couple things that save JtHM from being truly unbearable. One is that there is a pervasive, offbeat sense of humor that works more than it doesn’t. Vasquez is generally pretty self-aware of what he’s creating and seems to be making fun of the mopey, edgy 90s teen as much as he is pandering to it. Yes, the book revels in great spouts of blood and horrendous violence, but there is also an attempt to shine a light on why people feel this way sometimes. At the same time, Johnny goes off on longwinded, woe-is-me and the world-is-so-mean soliloquies that are sometimes insightful but are more often obnoxious. Vasquez also seems aware of this and embraces Johnny’s status as the literal villain. Johnny sucks. Do not be like him. The second saving grace of the book is Vasquez’s art. He has a definite style, which while often grotesque and goofy can also turn in an instant to be evocative and atmospheric. The art is super expressive and is without question the strong suit of the book. 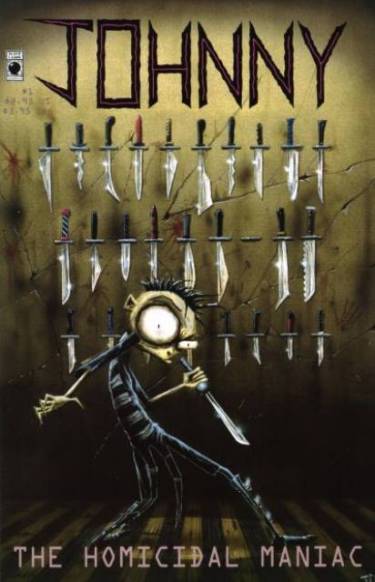 The cover of the first book. I’m using this because doing an image search means wading through an unending ocean of terrible fan art and cosplay.

This dialogue, though. There a couple of things immediately apparent when taking in this story. The first is that it was written by a young writer who is perhaps overconfident in his skills. The second is that the author has some talent with words, but hasn’t taken the time or effort to hone that skill. As a writer who cannot draw to save his life, I’m already inherently jealous of hybrids who can do both, so forgive me if this seems like a nitpicky take down of a comic book. Obviously, since this is a primarily visual medium, the art takes precedence over the dialogue. That said, words matter, man. Sometimes Vasquez realizes this, sometimes he doesn’t. Or rather, sometimes he turns a phrase, or a conversation, and it turns out nicely. There’s a point where one of his victims asks where she is. Clearly, it is an unpleasant place, because she is in Johnny’s torture-maze. His reply is simple and evocative: “Just another room in the world.” I really like that. It is supremely understated, yet contrasts sharply with how extraordinary her surroundings actually are. This simple phrase evokes a sense of the vastness of the world, and how much unknown business is happening in its unknowable number or rooms.

This kind of subtle wordplay is unfortunately outnumbered by instances of sloppy dialogue and needlessly pretentious monologues about the state of society as seen by one of its worst members. Most of the non-Johnny characters are wooden and tend to state their thoughts and backgrounds in the most obvious fashion possible. It’s like there was a bullet-point style outline made for some of these people, and instead of doing the work to fashion them into believable characters, the outline was just turned into dialogue. Meanwhile, Johnny goes on longwinded rambles about how maligned he is and how terrible society is and it’s all very 90s. In some ways, JtHM is distilled Gen X angst which is then shaken up and sprayed on a canvas. There’s worthwhile stuff in the result, but it’s messy. 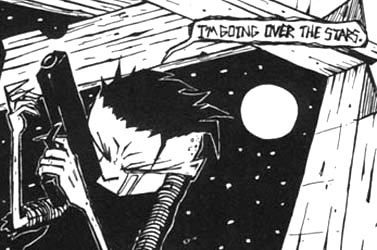 Johnny the Homicidal Maniac is a curious artifact of its time. From a historical standpoint, the mid-1990s were relatively calm. The Cold War was over, and while there were of course repercussions of the Evil Empire’s collapse, most of those were felt locally and didn’t impact the United States directly. I don’t intend to hand-wave away important geopolitical shifts and the horrific loss of life in places like Bosnia, of course. Yet globally, the threat of an extinction-level catastrophic nuclear exchange were greatly diminished with the demise of the Soviet Union. Whereas much of 1980s mass entertainment and artistic media could be seen as a country whistling past the graveyard, the 90s injected a heavy dose of darkness into the proceedings. Our popular culture shifted alongside the global situation. Once things become more stable in the world, it seemed the public appetite for gloomier, more introspective art and entertainment grew. Glossy New Wave pop and glorious, ostentatious butt rock gave way to the angsty wailings of Aberdeen’s finest dirtbags. Nine Inch Nails. The Crow. Goth kids in coffee shops. You know, the nineties.

JtHM‘s saving grace is its sense of humor.

I don’t have any neat unifying theory as to why this shift happened. A cursory, sociology-lite take would be to suggest that since we weren’t worrying about an imminent nuclear holocaust any longer, it was time to take stock of our own civilization. Our fears turned from an outward ‘other’ to ourselves. Judging from the content of JtHM, many of us didn’t really like what we saw. The intended audience for this book are young, angry oddballs. Johhny is not for the cool kids. It’s a cathartic mess of a book for people who would look at coffee shops filled with vacuous imbeciles debating whether or not Ministry is darker than KMFDM – whatever that even means – and wish they could take extreme action to remedy their exclusions from their clique. Personally, I’ve always rejected tribalism, and my friends in high school were a cross-section of teenage society. Obviously, my attitude was that those who derived comfort from the trappings of whatever clique they were affiliated with were dumb, and that I was totally not. In case you should ever forget, teens are the worst, myself certainly included. Anyone with an active longing for high school days clearly leads a sad life, and they have my deepest sympathies. Anyway, the point is that there is a time and a place for a work like Johnny the Homicidal Maniac, and both have thankfully passed for me.