Posted on November 8, 2016 by apocalypedia 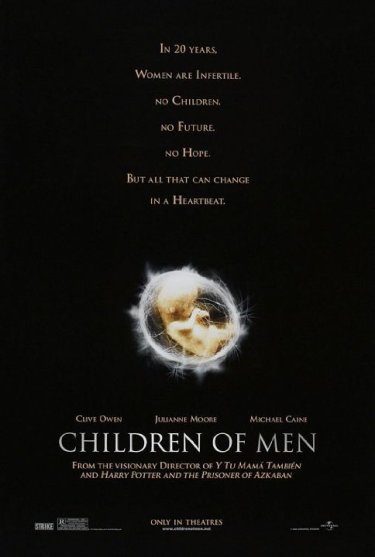 Damn. I first saw this movie upon its release, an astonishing ten years ago, and was immediately sure of two things. The first was that I had just watched a fantastic, arguably landmark film. The second was that I probably wasn’t going to watch it again any time soon. Turns out I was right, as this is the only time I’ve watched Children of Men since that first instance. My reaction is largely the same. Holy shit. It is a darkly beautiful, supremely intense, utterly stressful film that loses none of its impact on a second viewing. Actually, I’m surprised how much of the film stuck with me over the years despite not actually watching the thing more than once. The entire film has a sort of musical rhythm to it: the old Pixies cliché of quiet-loud-quiet. Wave of Mutilation, indeed.

The film opens with a black screen and the calm, soothing voices of the BBC speaking about a world of unrest. After a moment of this we get a visual: a crowded coffee shop, everyone watching the television mounted in the corner. The soothing BBC voices give us a bit of exposition: the world’s youngest person, Baby Diego, has been killed. As we’re learning a bit about the world – that no children have been born in over eighteen years – a disheveled Clive Owen walks in, makes his way through the crowd, and orders a coffee. He doesn’t seem particularly interested in the news of Baby Diego, and as soon as he has what he needs, he leaves the shop and walks out into London. This is a grimy, chaotic, third-world London which still maintains to hold onto its essential, grey London-ness. The camera, which has followed this guy out of the shop, swings around him as he Irishes up his coffee, giving us a full view of the busy street. We are told it is 2027. Things look bad, dreary, beaten-down. No warning: the coffee shop explodes, the street noise is gone, replaced with the high-pitch ringing of the ear recovering from a sudden loud noise, a woman stumbles through the settling dust, holding her arm. Black screen title card. Ringing.

I may have well just transcribed the screenplay there, but this opening scene is just so utterly perfect I’m not sure what else to do. It thrusts the viewer into a horrible, unpredictable, terrifying world that is instantly familiar. After lulling you into a false sense of security with the disconcerting but still kinda normal scene of people in a coffee shop the film makes its statement. This world is full of a reeling humanity, but alongside the ragged showing of civilization, life can and will end in a moment of unforeseen violence. Even when you expect the violence, it still surprises.

The rest of the film follows Clive Owen – Theo – as he finds himself in the midst of a massive conflict between the dystopian police state that England has become, and a group of terrorists who call themselves The Fishers. The fertility crisis which began unexpectedly and without explanation 18 years ago has continued without hope of reprieve. Obviously, without children, the human race will eventually die when the last individual falls. The reaction to this realization was one of terrified chaos. Nations and societies fell, civilization itself buckled under the pressure of this new state of being. England turned to a police state for protection, but part of this means the mass deportation of all refugees and immigrants. The Fishers set themselves up in opposition to the draconian, violent regime. However, their uprising has been nearly as violent and vicious as the government’s. While their leader is doing what she can to temper the more violent aspects of the Fishers in order to sway more people, many of their members desire destruction and bloodshed. This leader is Theo’s ex-girlfriend. Oh, and one other thing. Turns out, these folks found themselves a pregnant woman.

Michael Caine is the secret heart of the film.

There is a third faction in addition to the government and the Fishers, a secretive outfit who call themselves The Human Project. They do not really figure into the narrative other than as a dim destination for Theo and Kee (the aforementioned pregnant lady with a very unsubtle name) as they make their harrowing way through an embattled England. Their journey follows the pattern I mentioned before: relative calm with odd moments of humor and levity punctuated by sudden, jarring violence. The quiet moments are vital to the experience, because without them you end up with a soulless, noisy action movie, which Children of Men has no intention of being. Instead of relying on dry quips and one-liners, the film takes its time and builds small character moments of everyday corniness. Theo and Julien play a weird game where they spit a ping pong ball at each other. Michael Caine as the misleadingly carefree ex-hippie Jasper asks Theo to pull his finger. Both of these goofball instances do two things. The first is that they humanize both the characters and the world. Secondly, they set up acts terrible violence which would otherwise become numbing.

Surely nothing bad can happen to you when you have a ping-pong ball in your mouth….

Theo is not a violent man, and at no point does he use a weapon (unless you count a car door). His motive is to ensure the safety of Kee once it falls upon him to protect her and escort her to The Human Project. He achieves this through stealth, luck, and self-sacrifice. The only thing he has in common with ordinary action heroes is his stoic countenance. He’s an alcoholic who is just as weary of the oppression of the new world order as any of the grimy, downtrodden citizens we see in the background. The difference is that Theo has a past of activism, and a deep desire to do something that matters. When the opportunity presents itself, he throws himself into it. In the end, when he thinks he is dying (and may very well have done so, this is one of them vague endings), we can see the brief look of satisfaction on his face before he passes into unconsciousness/death. Not only did he accomplish something for the betterment of humanity, something which he aspired to as an activist and ultimately failed at, but he did so on his own terms. He saved life without taking life. In the end the price (maybe) was his own life, but that seems like a fair trade for the future of humanity.

Despite the seemingly complicated future world in which it is set, Children of Men is actually a quite simple film. It doesn’t spend any more time on exposition than necessary. It doesn’t matter why there is a fertility crisis, what matters is civilization’s response to an incomprehensible disaster. The particulars of how society broke down isn’t of interest here: this is not 1984’s pointed effort to elucidate historical reasons for collapse and subsequent moves toward totalitarianism. This is a story about the underlying humanity of a fallen world. The film doesn’t flinch from love or cruelty, and violence is purposely depicted in a realistic manner: sudden, random, and vicious. Joy in difficult places is also depicted realistically: unexpected, cathartic, goofy. There are moments that transcend both these things.

Towards the end of the film, after Kee has given birth, there is a moment of shared awe. Earlier, Kee and her child have been abducted by The Fishers in a bid for revolutionary power. The government is in hot pursuit, however, and the refugee camp Theo and Kee have hidden in has become a warzone. Firefights and explosions are happening and things look grim. Theo, dogged as ever, follows Kee’s abductors while dodging bullets and eventually catches up to them. After he picks his way through a live firefight and finds Kee and her child, they work their way out of the decimated tenement building where they were holed up. Refugees are everywhere, but once they see the screaming baby, they fall into a reverent hush. Some are shot while they stare gape-mouthed at this new wonder. Slowly, the two make their way down the stairs until they’re caught by the government’s soldiers. They, too, are overcome with awe by this tiny, squalling miracle. Theo and Key are allowed to progress uninhibited through the crowd of heavily armed government soldiers, who are busy being dumbfounded by this possible rebirth of society. Then some shithead takes advantage of the moment and fires a rocket at the government, and the battle resumes, the moment of shared clarity forgotten. Like the beginning, this is Children of Men. It is a film which manages to display humanity at its best and worst, by juxtaposing both in the same moment. It is profoundly affecting, and is otherwise a brilliant film. I will also in all likelihood not watch this for another decade at least, because I can only take so much visceral intensity. Damn.