This is one of those classic first lines. The kind of sentence that writers aspire to, and obviously know when they hit upon it. Bradbury obviously knew how good is opening sentence is, because it gets its own paragraph. The thing about brilliant openers is that often they’re quite simple. This simplicity belies the depth of the statement, of course, but a top-tier first sentence can encapsulate the entirety of the novel that follows. Check this out:

“It was a pleasure to burn.”

If you’re a writer, stand up and salute that shit. In only six words – six words! – Bradbury not only explains what the novel is fundamentally about, but also identifies the troubling contradiction within the overall premise. If you don’t know anything about this landmark science fiction novel, I will explain a little bit about what’s going on here. Really, though, that first line is all you actually need by way of synopsis.

Fahrenheit 451 is about a fireman named Montag. It is made quickly apparent that Montag is not an ordinary fireman, however, and the world presented here is one from an indeterminate future. Instead of putting fires out, Montag sets them. Houses are fireproof in this future, you see, so that the firemen can properly attend to their true business, which is exterminating every last book in existence. At first there is no explanation for this. We get a scene of Montag having a great old time hosing kerosene all over the place and torching some poor fool’s library. Then, on his way home, he meets a goofy teenage girl, and the story takes hard turn.

The society Bradbury depicts here is not a classic dystopia. 1984 was published four short years before this story, but they are not analogous. Whereas Orwell was concerned with top-down power abuse, Bradbury was far more concerned about the state of the common person (or in Orwellian terms, the proles). Bradbury doesn’t take the time to lay out a detailed analysis of how this future vision came to be, he simply presents the world as it is. When Montag meets the girl, Clarisse, the reader assumes that this is the first time Montag has questioned not only his profession, but the society in which he lives. We later find out that Montag has been troubled for some time, but this is a good introduction for the reader to get a basic understanding about why this particular future is both insidious and insufferable.

Clarisse asks a good many seemingly silly questions about her surroundings. She makes bold statements which are probably true, such as when she proclaims that people think she’s insane. In this world, she probably is. What differentiates her from her fellow Americans is that she has intellectual curiosity, and follows up on her whims. She questions things, and because of this she is treated as a possibly dangerous eccentric. Despite this, Montag is intrigued. Upon this first encounter, he returns to his home where his wife, who has the appropriately drab name Mildred, has attempted suicide by downing an entire bottle of sleeping pills. After the stomach-pumping service rolls around (this is clearly a common occurrence in this society) and Mildred wakes up the next morning, she couldn’t be less interested in her near-death experience.

This event, combined with his chance encounter with his goofball neighbor, pushes Montag to take a good, hard look at his life. Once he begins doing this, he begins getting a little wiggy around the edges, and the rest of the novel follows Montag as he begins to push back against the society in which he lives. Bradbury makes an effort to understand just what happened to the world to make systematic book-burning a keystone feature of society (although he thankfully skips the didactic manner of Orwell), and he does so in an efficient, subtle manner. There are occasions where Bradbury gets a little overly-poetic with his language, which you may enjoy (I find they run counter to the brilliant simplicity of that first sentence, but whatevs), or which you may find distracting and strange. The ending, however, was quite unexpected. 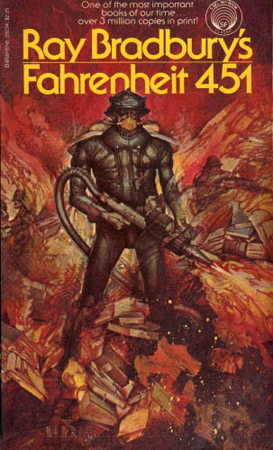 Hey, Master Chief, I think you got the wrong Library.

The closest we ever get to an explanation of the world in Fahrenheit 451 is when Montag’s boss, Captain Beatty, shows up at Montag’s house when he misses a day at work. Current events have been working on poor Montag, you see, and he was at home taking a mental health day to try and sort out his confusion. Mildred is of no help whatsoever, as she has clearly burrowed so deep inside of her distractions that her true self only surfaces occasionally to attempt suicide, and then is quickly repressed when her attempt fails. So Montag is left alone to grapple with the death of Clarisse (which is abrupt and never really explained), his ongoing disillusionment with book-burning, and how he feels about the state of the world. Then Captain Beatty shows up to lay out how things have arrived at such a state. What follows is a succinct, rather astounding summation of how the 20th century changed humanity in a mere moment of history.

“Picture it. Nineteenth-century man with his horses, dogs, carts, slow motion. Then, in the Twentieth Century, speed up your camera. Books cut shorter. Condensations. Digests. Tabloids. Everything boils down to the gag, the snap ending…. Speed up the film, Montag, quick. Click, Pic, Look, Eye, Now, Flick, Here, There, Swift, Pace, Up, Down, In, Out, Why, How, Who, What, Where, Eh? Uh! Bang! Smack! Wallop, Bing, Bong, Boom! Digest-digests, digest-digest-digests. Politics? One column, two sentences, a headline! Then, in mid-air, all vanishes! Whirl man’s mind around about so fast under the pumping hands of publishers, exploiters, broadcasters that the centrifuge flings off all unnecessary, time-wasting thought!”

I’m not sure, but I think Bradbury just described the Internet. There are two things about this sequence that please me to no end. The first is his identification of the corrupting nature of speed and technology on thought and quality. The advancement of mass-produced media has allowed for greater reach, and has therefore sped up the consumption of ideas. However, since there are more and more people consuming, there is then more and more content to consume. Ideas become condensed to make room for more things. Instead of taking the time to consider what one has read/watched/whatever, it’s simply on to the next thing. Once this becomes the established practice, it simply becomes easier to cut out anything worth considering in the first place. Content becomes expendable. The second thing is simply Bradbury’s style, which conveys the breathless nature of this process. Short, snappy sentences turn into single words which eventually devolve into pure onomatopoeia. In this way, the very structure of the writing mimics the process that Bradbury is talking about. That’s super cool.

The society of Fahrenheit 451 has devolved along these lines. The key difference here is that unlike other dystopian visions, society did this to itself. It was a natural process that the state merely took advantage of. Books were not outlawed because the state feared them, they were outlawed because that was the will of the people. Actual thought makes these people uncomfortable, which we see in Mildred’s constant fretting. The world is terrible and upsetting, but since there are so many options for distraction, the vast majority of people can simply muddle through life without having to pay attention to anything outside their immediate experience of the moment. The fact that everyone is despondent to the point of self-destruction is almost beside the point. Mass distraction means that there is no longer any accountability, which means that the power elite (both the state and private interests) can do what they like, so long as they don’t upset the populace. 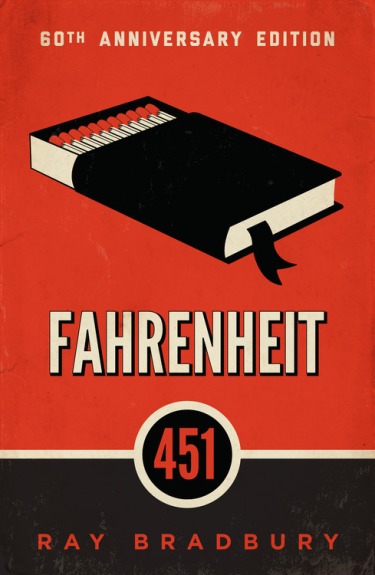 I do enjoy an understated cover.

Of course, getting nuked into obliteration probably counts as being upset. The ending to this book, while being subtly foreshadowed, still comes as something of a surprise. There are mentions of an impending war, and it is stated early in the novel that the United States had started (and won!) two atomic wars since 1960. Despite this, we’re still distracted from the impending apocalypse by Montag’s discoveries and eventual traitorous actions. In fact, once Montag acts upon his anti-authoritarian impulses, Fahrenheit 451 suddenly turns into an action scene. Montag straight sets Beatty on fire, and then has the mechanical Hound set on him, after which it’s run-run-run and whoops! Nuclear apocalypse.

You see what Bradbury did there? There’s a point towards the end where the narrative devolves from a slower, rather high-minded examination of ideas to a fast-paced series of short, punchy, action scenes before terminating in the ultimate scene of onomatopoeia. Boom. No more city, no more civilization, just a bunch of nerds wandering the wasteland with memorized snippets of literature in their heads. Not only does the first sentence telegraph the entirety of the novel – burning books is crazy, but it feels so good while it’s happening – Bradbury adjusts the very structure of his work to fit the theme he is discussing. A focus on speed and cheap mass appeal leads to distraction which eventually leads to annihilation, and oh by the way that’s how the world ends. Now if you’ll excuse me, I need to go memorize some Shakespeare. Just in case.