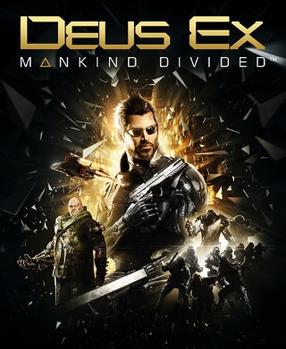 I may have skipped an entry or two between the first Deus Ex and the latest entry in the series. I intended to go back and at least replay Human Revolution, the 2011 reboot/prequel to the original game, before getting into the new one. Then other projects/an actual job/laziness prevailed and I didn’t get around to it and before I knew it the new game is out. The first thing that happens upon starting a new game is that we are given a nice 12 minute long recap of the previous entry. This proved to be vital to me, because despite thoroughly enjoying Human Revolution, I didn’t really remember a goddamned thing about the story. After finishing Mankind Divided, I’m pretty confident I won’t remember much about the story here in five years either. Both games have this in common with its 2001 ancestor, the original Deus Ex. The narrative in that one was a confusing, complicated mess that had something to do with the Illuminati. I don’t know. That kind of nonsense carries over here, so I’ll try to parse the setup for the game.

Mankind Divided picks up a couple of years after the conclusion of Human Revolution. Both games are near-future versions of our world (a little too near, considering they take place around ten years from now) in which the biggest technological advancement is human augmentation. Essentially, humans have begun to fit themselves with robot legs and brain chips and whatnot to turn themselves into cool cyber-people. Augmented humans can do things “naturals” cannot, and the consequence of that was to split society into two distinct classes. Now, the thing about augmented humans is that it seems like such radical cybernetic enhancement would be restricted to the social elite, which is to say those who could afford such technology. However, we are told that a significant number of newly augmented humans underwent the process in order to survive. This is to say that massive, amoral corporations (a cyberpunk standby) augmented huge numbers of workers (sometimes against their will, or given the choice of ‘augment or starve’) in order to enact massive construction projects around the world.

The ending of Human Revolution, which is the only truly important part of that first game (story-wise), featured an apocalyptic event, known in-game as “The Incident.” What happened was that the baddie figured out a way to hack an override signal into every augmented human. I know, just go with it. Anyway, he used this pirate signal to essentially hijack the augmented people’s brains and caused them to go on a destructive rampage. Millions died. Cut to two years later, and Mankind Divided takes place in a world where augmented humans are treated with contempt and relegated to second-class status. The game takes place in Prague, which is said to have a higher than normal augmented population, and much of the game has you navigating this tense political atmosphere.

The player is Adam Jenson, a highly skilled, highly augmented counter-terrorism agent for a shadowy international organization. This status, however, does not excuse him from the various indignities of being augmented in a highly segregated world. Once you’re set loose in the world you end up getting in “augs only” lines to get into the “augs only” subway cars. If you fuck up and get in the wrong line, cops yell at you and call you mean names. “Clank” seems to be the slur of choice, which is a pretty good word so far as fictional slurs go. Most of the narrative of this game comes from these environmental cues, and like the previous game there are all manner of computers to hack to uncover emails and whatnot which all add little bits and pieces to the world. I’m not sure how well this all comes together, actually, so it’s a good thing the actual moment-to-moment gameplay is actually still pretty fun.

The game looks great, even if it doesn’t feel much like Prague.

I like sneaking into ventilation shafts. I don’t know why. I suppose it’s because I’m not particularly graceful or sneaky in real life, so I turn to video games to enact my stealthy fantasies. I like crawling into the walls, opening up a grill right behind some baddie, and tazing his unaware ass. Lucky for me, Deus Ex gives the player plenty of opportunities to do this. Also note that I play these games non-lethally. This is part of my tendency to play games as the goodiest of two-shoes when given the opportunity. I do this here in spite of the game giving me every opportunity to feel okay about murdering these assholes. There is a computer one can hack late in the game when the city goes on total lockdown which pretty much states that all the police are hardened mercenaries. There are other tidbits lying around which are intended to make your character feel less like a scumbag for gunning down everyone he sees. It’s a strange hedging – why not allow the player to wonder if they’re the real villain after mowing down dozens of cops? – but then this is a tonally strange game.

Most of the talk that surrounded this game at launch seemed to distill down to a collective Internet facepalm over the way Deus Ex likens the experience of fictional cyborgs to the treatment of oppressed racial minorities. That reaction is warranted, because the developers lacked any kind of subtly or self-awareness when putting this stuff together. Also, don’t use the word “apartheid” for any other reason than describing actual apartheid. It’s kind of like invoking Hitler for any other reason other than talking about things Hitler actually did. The fictional plight of these augmented humans is not analogous to any kind of real-world discriminatory social policies. If a segment of the population inexplicably murdered a few million people, the people outside of that minority would have every right in the world to be, let’s say, skeptical of that minority. There’s a world of difference between that situation and one where a minority comes in and treats the majority like second-class citizens because they can. The set-up is a bad one, and does nothing to illuminate the issue of institutional racism.

There’s a lot of getting hassled by The Man in this game.

Meanwhile, outside of the clumsily handled racial undertones, the rest of the story here is a bit of a mess. This has everything to do with Deus Ex wanting to be a serious cyberpunk story and refusing to indulge in some desperately needed silliness. I understand that both this and Human Revolution are prequels that will eventually tie into the original game, so the stories involved will eventually need to reference back to the — *sigh* — Illuminati. The problem is, that stuff is real dumb. It always kind of was, but sixteen years of game evolution have brought us to a place where it’s a little more difficult to just go with it when a game wants to take itself seriously. The conspiratorial, Illuminati nonsense would be totally fine if the tone of the game was lighter. I mean, look no further than Metal Gear to see a franchise invoke pure nuttiness successfully. You just have to own that inherent goofiness in a way that Deus Ex refuses to do.

The good news is all that nonsense is easily overlooked. Obviously the narrative aspect is a bit of a disappointment. The side missions mitigate this disappointment some, as they’re generally well written episodes of a show I wish I were watching instead of the main story. There are some loose ends here which are kind of obnoxious, although I may have just missed some things. That’s the problem with hiding content, there’s no way of knowing if you’ve seen everything. All that said, the actual playing of the game is quite good. The sneaking around and playing with different abilities all feel great. While the setting doesn’t feel at all like Prague, the hub is still a well-designed playground built for skulking and exploring. All told, Deus Ex: Mankind Divided is a very good video game. It’s just not so great as a story teller, and that’s okay I guess.