Posted on September 8, 2016 by apocalypedia 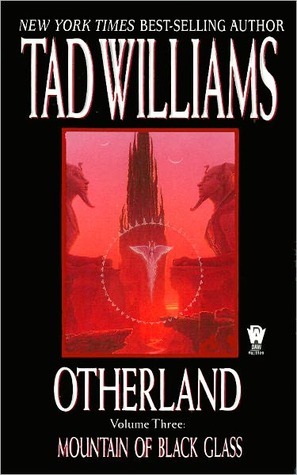 Okay, now we’re getting on with it. If the first Otherland volume was a slow-burn buildup to the overall narrative and the second book was a meandering jaunt through many fantastical worlds, then this third installment is the Otherland series finally getting down to it. Despite being the longest book of the series so far, Mountain of Black Glass manages to feel more quickly paced and vital than the previous books. Characters grow, move, and get things done. For the first time, the narrative seems to have a purpose, and there is an end point in sight. Don’t get me wrong, this is still a Tad Williams novel. He’s a wordy dude, and his style is still as detailed and character-oriented as ever. When I say “quickly paced,” I only mean in comparison to what has come before. It moves quickly as, say, a cyborg future-turtle versus a regular meat-turtle. But whatever, if you’ve read the first two books you’ve clearly made your peace with how Williams rolls.

As for the story, it is handled a little differently than previous installments as well. There is less movement between virtual worlds, but the characters do more things in them. The book begins, as do they all, with Paul Jonas (sigh). As ever, Paul is lost and confused. This time he at least knows where he is, which is to say he’s a version of Odysseus in a jacked up version of The Odyssey. He just doesn’t know what he’s doing there. That said, Paul finally becomes a real character in this book. The problem with the amnesia device is that when a character has no memory, they have no history and are thus only of interest insofar as their natural personality and/or charisma allows. Paul’s whole deal is that he’s just a boring, everyday Englishman with no particular personality quirks. Over the course of the story, things begin to come back to Paul, and as he experiences the horrors of virtual Greece (and later Troy) he also starts to kick back against his bland nature. I’m not sure if some of this has to do with the approximately twelve concussions Paul has suffered over the course of the series, but probably (Williams likes to end chapters with variants of “and then everything went dark,” usually due to some kind of head trauma).

Meanwhile, Renie’s crew quickly figure a way out the strange network backwater the previous book left them in. They spend most of their time in this novel in the coolest simulation of the series. Unlike most of the virtual worlds in the second book, this one is an original creation. Basically, the entire world is encapsulated in a giant House. Entire societies have been formed in various areas of this endless structure. Honestly, it’s a concept worthy of its own book. I really liked it. Anyway, Renie and !Xabbu and company wind up here, and are forced to confront Dread, who is a real dick. Look, for a villain he’s still pretty one-note. I understand that the Calliope investigation sections are meant to give Dread a background, but mostly he’s just evil for evil’s sake. Which, okay. As far as bad guys are concerned, Felix Jongleur is still a far more considered character. He’s evil, but he has principles and reasons for doing things other than just feeling like it. 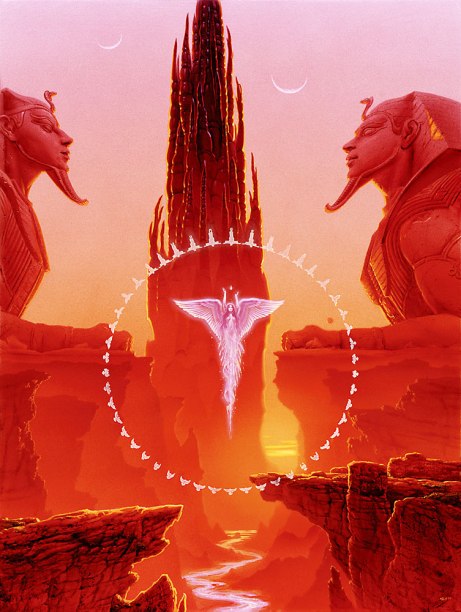 The cover paintings continue to be dope as hell.

All things considered, Mountain of Black Glass is Orlando’s book. Given how this ends, that makes sense. I haven’t really talked about him and Fredericks much, so I’ll take a moment to give the kid his due. Since I don’t think I mentioned it before, Orlando is a teen boy who is way into virtual role-playing games. Also he has progeria, which is a very strange, very fatal genetic condition. Essentially, his body ages ultra-fast. Most people who suffer from the condition don’t even make it to their teens, and spend most of their lives as weak and susceptible to sickness as a person in late old age. Luckily for Orlando, his parents have money, so not only does he get the best medical care, he can escape his horrible body by hanging out in virtual reality. However, once he and his best friend are trapped in the Otherland network, Orlando must deal with most of the challenges thrown at him in a vastly weakened state. This is, sadly, due to his real world body finally giving out on him. Over the course of the story, Orlando must come to terms not only with his mortality, but with his relationships with his parents and his best friend Fredericks.

Orlando’s bestie is a dude named Sam. However, a couple books back, when they first found themselves trapped in the Otherland network, it is revealed that Sam is a girl. After that, there is a lot of confusion about this, especially considering that the network has assigned Sam a male sim. This is all a clever way for Williams to play with issues of gender and love without getting obnoxiously preachy about it. Orlando and Sam love each other, despite only knowing each other in a virtual space, and the gender aspect, while superficially troublesome, doesn’t end up making much of a difference. Williams actually pulls a similar trick later in the book with Renie and !Xabbu once they enter the Troy simulation and Renie is given a male body. She freaks out because she has a dong, but who cares because love is love.

In the end Orlando dies, and while expected, it is still a huge bummer when he goes. He dies heroically, using his last ounce of strength to destroy a powerful member of the Grail Brotherhood while simultaneously throwing everything into chaos. And by everything, I mean just that. By the end of the novel, it is nearly impossible to figure out just what the fuck happened. Orlando kills Yacoubian, Dread manages to take control over the Other with violence, and thus controls the system. Renie, !Xabbu, Fredericks and Orlando’s sim-corpse wind up on the titular mountain of black glass with none other than a young version of Felix Jongleur. Why? Who knows. This is the first time that this series gets esoteric in a Neuromancer kind of way and while this is kind of cool it is still rather frustrating. Did Orlando die in vain? I doubt it, but there’s no way to know for certain until the series is done.

Here’s another troubling aspect of Orlando’s death: is it a true death? The whole point of the Otherland network is to grant immortality of the mind to the Grail Brotherhood. It is made clear that in order for this process to work, the body must be killed. The ending shows that this process didn’t work exactly as it was supposed to, as just one of the Brotherhood who underwent the ceremony (in which the physical body dies and the mind is transferred to the network) managed to survive, and that guy ended up brain damaged. That said, we are also told that Paul is actually a test subject who underwent the process already. Does this mean that poor Paul is dead in the real world, and exists solely in the network? Hard to say, although the suggestion is there. Yet despite a little amnesia, Paul still exists. So there is the possibility that somewhere on the network, Orlando’s consciousness is still floating around.

The ending of this third volume sees something of a catastrophic end to the Otherland network as we’ve seen it so far. Previously, the simulated worlds that the characters have travelled through have shown signs of entropy and collapse, but have still existed and generally functioned as intentioned. Now that Dread has taken over the network, it can be assumed that absolute violent chaos will envelop all of the simulations. In other words, the coming of Dread is an apocalyptic event in each of the virtual worlds that have grown in the Otherland network. This, of course, brings up the value of virtual life. One of the reasons that the House world was so compelling is because it’s where Renie and her friends finally come to understand the value of the simulated world. The tech is so advanced that even the artificial constructs are essentially alive. If they live a life, feel feelings and think thoughts, are they not then alive? Is their virtual life worth anything? Dread – who has already discovered that their reactions are real enough as to be worth murdering – now has total control over all of these artificial life forms. The destruction he will surely rain down on these poor bastards will be complete, but does that mean anything? The final novel has so many questions to answer! Most of the good guys have determined that artificial life has value, so will they suffer the Otherland network to exist? Is it possible for the network to continue without using children’s brains to function? How does that work again? If they do pull the plug, is that the same as straight up killing Paul, who is probably dead in IRL? I don’t remember the answers to any of those questions. Here’s hoping that the fourth book works as well as this third one did.