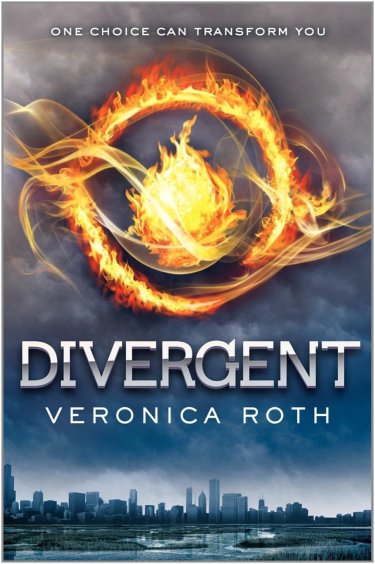 This is the sentence where I acknowledge what we’re dealing with here, which is that Divergent is the first book in a young adult fiction dystopian trilogy. I will also acknowledge that it’s likely an editor skimmed this manuscript and exclaimed “we may have the next Hunger Games here!” This book (I’m sorry, these books – trilogies are not only trendy, they’re mandatory) is part of a larger trend that’s hot now, will fade away for a while, and then return for another run. It’s a strange industry. Dystopias give way to vampires which give way to zombies or whatever and then back to dystopias. So all of that is true. Now that I have acknowledged the circumstances that surround the publishing of a Young Adult Trilogy (Y.A.T.), I will also note that it would be easy to be super cynical about the novel itself. It is at this point that I will acknowledge one last thing: this book is actually pretty good.

Here’s the thing: I get that it’s easy to dismiss products in the middle of a trend. I know, because I do it with certain sub-genres myself. Superhero movies? Fuck off, I don’t care. You can’t make me care, I hate you. Yet once in a while I’ll actually watch one, and guess what? I almost never hate the experience. All this means is that just because something is marketable doesn’t make it bad. Divergent is a strong novel to start a series with. It has a clearly defined world and excellently drawn characters. Roth has a snappy, clean style that’s fun to read. The action sequences are superbly executed and suitably brutal, and the more heartfelt moments come off as genuine (with just a touch of appropriately adolescent cheese). Beatrice, the protagonist, walks the fine line of a believable adolescent hero; she’s strong but is as vulnerable and stupid as any other teenager. The narrative goes to an unexpected place, but by the end everything feels earned.

This is the kind of dystopian future that requires a little bit of set-up to understand fully what’s going on. The story takes place in an apparently post-Apocalyptic future Chicago. The disaster that took place is either unknown or not talked about, although it is heavily implied that the catastrophe was caused by humans. In the aftermath, society re-formed with the intention of avoiding a repeat of destructive human folly. To that end, this group of people apparently made up a giant pro/con list of human attributes and molded their new society around the pro list. The people decided upon five aspects of the human condition and formed entire factions around them. You’ve got selflessness (Abnegation), kindness (Amity), truthfulness (Candor), courage (Dauntless) and knowledge (Erudite). Each faction wrote up a manifesto and recruited people who best match their key attribute. Are you a Quaker? Abnegation is probably your best bet. Does egghead like his booky-book? Erudite is for you. Do you just blurt out whatever is on your mind? Get into Candor, you loudmouth jackass. This social structure is the basic concept behind the series. Each faction performs the functions they are best suited to within the overall society that’s based in old Chicago. Abnegation handles the governing functions since power can’t corrupt those who are incapable of being selfish. Dauntless is on security detail since they’re brave. You get it. It’s a cool set-up.

Most of the story follows Beatrice as she chooses a faction and then goes through the trauma of training in order to be made a permanent member. Failure means exile, essentially, as she would be factionless, whose members wander around aimlessly all dejected and sad. There’s plenty of teen conflict along the way, of course, just like there’s a boy, but none of it gets obnoxious. Well, not too obnoxious. These are teens after all. Anyway, while the majority of the novel is here to show Beatrice’s growth after she chooses her faction, the book also sets up the larger overall conflict that the rest of the series presumably deals with.

There are no fun alternate covers that I know of, so here’s the logo for the Diverent Olympics.

Ordinarily, when I get to this section of the article I have to sit and stare off into the middle distance for a few minutes while I decide what it is about a particular work I feel like writing about. The idea being most books/movies/games/whatever have an endless amount of points of discussion, and I may as well speak to what interests me rather than stick to a rigid plan. However, this copy of Divergent I have has like, supplemental material in the back. It’s like the bonus material on those shiny things people used to watch movies with, “DVDs.” There’s an author interview, a quiz, copies of the faction manifestos (which are actually pretty neat), some hot writing tips (I would say they’re all pretty subjective, but on the other hand she’s published and successful and I am totally not), and a hotter playlist (hope you like mild alternative rock). Oh, and then there’s some discussion questions. I’m going to use these instead of thinking for myself, if you don’t mind.

Okay, there are fifteen numbered entries and each entry has like five questions. Nobody has that kind of time, so let’s take a look at the one that I find the most interesting (which is to say I’m pretty sure no one gives a shit about what faction I think I would be best in. Erudite, obviously, except hopefully not evil). That question reads as follows: “What was the reason behind the creation of the factions? Do you agree or disagree that such a system is a beneficial way to structure a society? Bleep blop boop, does it work?” I may have paraphrased a little. Anyway, the surface answer to that last one is pretty easy, right? Three words: fuck and no. The other two questions have easy answers as well. The first being something along the lines of “if you base a society on the good aspects of humanity, it leaves no room for the bad.” The second question asks my own personal opinion, to which I’d answer, obviously not as it is clearly broken. What part of ‘dystopia’ don’t you understand, back-of-book question asker? The real question underneath all of these is why does this well-intentioned system fail? Quick answer: people are terrible.

The society of Divergent fails because it presumes that humans are essentially rational, and that if we could somehow corral the irrational aspects of our brains we could live in a sort of utopia. In this book, the method of purging the corrupt, irrational behaviors is to set up factions that correspond to their moral, equally irrational, opposites. So, some people are chaotic and careless, drawn to risk and violence. Sometimes, those people use those characteristics to hurt others who may disagree with them and exert undue power over them. The faction of Dauntless was an attempt to funnel the energies of those kind of people and put them to positive, rational use. That sounds great, except of course people are not only irrational to the point of self-destruction at times, but they also display a wide range of character attributes. The framework of Divergent’s society would work if, when rolling your character, you put all your points into INT and called him or her “Erudite.” But only a crazy person would do that, because they would then be ill-equipped to do much of anything other than spout arcane trivia before being beheaded by the first kobold with a sharp stick they come across. Yet this is pretty much how this society operates, to the point where the leadership of factions have a spot-and-kill policy in place for anyone who might show competency in more than one faction. Smart and brave? You’re a dead woman, Hermione, if you’re going to be in Gryffindor you best drop the books if you know what’s good for you. That attitude is insane, and of course that’s why we find ourselves in a dystopia.

Beatrice, our awesome protagonist, is of course one of these people. It’s a good narrative technique to keep the reader as confused as the main character as to what, exactly, the title of the book even means for most of the time. As she moves through her process of being initiated into Dauntless, we all learn together just what kind of world we’re dealing with, and why everything is all jacked up. As it happens, when one faction of people has all of the knowledge, they’re going to have a distinct advantage over the factions that apparently agree to remain ignorant. Likewise, the faction that studies martial arts and the means of violence is going to have the upper hand over those who choose to be pacifists. That’s all well and good if they remain separate, but if you have people around who know how the world works and can also win a fight? Now you have trouble. Tris, because she has a three-dimensional mind and can comprehend various kinds of behavior, is in a prime position to figure out these kind of schemes and presumably mount defenses against them. That, I presume, is the premise of the second and third books.

Meanwhile, I get to try and figure out what exactly went down in the last few chapters here. The ending was abrupt and brutal and I’m not sure that I liked it. I certainly didn’t expect it. Obviously, the Erudite and Dauntless leadership was up to no good. That much was clear throughout. I guess what I didn’t expect was the method of their offensive against the rest of the society (or the Abnegation-led government aspect of it, anyway). Zombie-Dauntless attack? Okay, sure. That does set up some fun moral quandaries for our troop of teen rebels to sort out, of course. Also, it’s likely too soon to start thinking about anything other than pure survival, but what is going to be the plan going forward? Factions are dumb, but what else have you got? Also, is Chicago all that’s left? Are there micro-societies all over the former United States? Is life better on the West Coast? (Yes. Always.) Well, now I’m ending with a lot of unanswered questions, so I suppose the only thing for it is to read the next volume.