The Dark Tower V: Wolves of the Calla

While the writing process of Stephen King’s The Dark Tower has always been… erratic, there is a clear line of demarcation between the first four volumes and the final three. The line is one of tone and cohesion, which makes all sense in the world considering the sporadic nature of the writing and publication of the series prior to this point. What was once an esoteric world that traded more in character than detail begins to shift with the final three volumes. This is not to say that King has suddenly lost his talent for creating and conveying great characters, of course. Rather, the focus of the storytelling turns from character to plot, filling in backstory and intent. Eventually, the Dark Tower must become real, and in order for that to happen details about the world(s) our ka-tet inhabit must finally materialize and become concrete.

The tone of the previous novels, even the more event-driven The Waste Land, has been that of a hazy, other-worldly hallucination. Over the course of the series there has been drips and drabs of information about the world at hand, about the Tower itself and those who would protect or attack it. None of this information added up to much more than vague suggestions until this fifth book, however. Previously, readers have been introduced to the main players, shown a world that once was, and suggested that our world and Roland’s are vitally connected in spite of the infinite nature of the Dark Tower. We’ve drifted along for four novels, we’ve witnessed the growth of the central core of characters, and have been presented with mystery after mystery. Finally, after thirty years of this drifting, King gets down to it and begins answering questions.

This, of course, is problematic. Sadly, it’s the downfall of any imaginative endeavor that builds its following on mystery and withholding information about the world being created. It’s the Lost allegory, essentially. Throughout the Dark Tower experience, aspects of the story have come and gone, have been changed in retrospect, or twisted to become something else. This works within the construct of the series as a whole because the one constant is that the Tower, the very crux of the universe, is in decay, so that all worlds are slowly unravelling. Time, direction, and history itself are no longer cohesive and is prone to sudden shifts. In the first novel, Farson is a town. By the third, it is a person. By the fourth, it’s Marten the Big Bad. Now, as the series hurtles into the home stretch, hard authorial choices must be made, and because so much leeway has been given to the readers, the concrete details that are plunked down before them can be difficult to reconcile.

So that’s one issue that readers need to prepare for. The other is understanding the meta-history behind these final three books. Prior to these final three, the publication of Dark Tower novels was kind of an event. Years separated each release, which is significant considering how flipping prolific sai King is otherwise. Then, in 1999, Stephen King got hit by a van and almost died, and that influences in a big way how the rest of the series plays out, for better or worse. For now, suffice to say, the accident prompted King to finish the mainline series pretty much immediately following his recovery. The time between volumes then went from five or six years to six months. By the time Wolves of the Calla was published, King had already written the end, and as such these books read as parts of a whole. There is a cohesion found between these final books that is missing from the rest of the series.

As for Wolves of the Calla specifically, well, it is a tremendous read. While I have read the first four books many, many times over, I believe this is the first re-read of these final three books, which means that for once I don’t know every beat of the plot, or every scrap of dialogue. I recall the broad strokes, of course, but the joy is in the aforementioned concrete details. I will say right up front that this particular volume only hints at some of the weirdness ahead, but as an episode of The Dark Tower, it is very strong. It is the first time we see our ka-tet behave as gunslingers, and it is a sight to behold. By the end one has a total and true comprehension of what Roland is, and what his friends have become. It is very satisfying. Put another way, the hardback edition clocks in at just over 700 pages, and I knocked it out in two days.

Wolves of the Calla introduces an important new character who, as it happens, is not unfamiliar to fans of Stephen King’s writing. After elements of The Stand appeared in the previous volume, bleed-in from other King novels was perhaps to be expected, so the appearance of Father Callahan from ‘Salem’s Lot was by no means shocking. Perhaps more surprising is the amount of time King gives this otherwise minor character (having only been through ‘Salem’s Lot once, I had kind of forgotten him). It’s cool, though, since the Padre’s tale is a compelling one. It’s essentially the magical realism version of the alcoholic’s journey. As Callahan’s story unfolds, we learn that yes, he’s a drunk, and yes, his faith was weak, but at the same time we come to understand that like the rest of our group of flawed heroes, there is a deeper steel in Father Callahan. It just takes him a while to figure that out.

The manner in which Callahan lives his life during this period of wandering and drinking is by travelling the “hidden highways,” which is where the aforementioned magical realism kicks in. You see, when Father Callahan bails on New York City he doesn’t do so by the accustomed hobo highways, he does so via a footbridge into New Jersey that doesn’t necessarily exist. That is, it doesn’t exist in our square-bear, buttoned-down Madison Avenue perception of like, our true reality… maaaan. What is refreshing about Callahan’s travels – and The Dark Tower series in general – is that King doesn’t really indulge in that level of hippy New Age nonsense, thus the realism. Yes, these novels are essentially about infinite worlds in seemingly inevitable decline. Yet these worlds are at the same time grounded in gritty reality. There is little glamorous about Callahan’s road tramp days. He works and drinks until he gets itchy feet and then moves on. The only difference between him and any other drifter is the fact that Callahan also drifts through various realities. To be fair, not a lot of attention is paid to these alternate universes, they are essentially there to show that there are many levels of the Tower, and none of the differences are particularly important (unless you happen to be unfortunate enough to live in one of the places where Captain Trips breaks out). In this case, the literal truth of alternate realities only serves to underscore the hard truth, which is expressed near the very beginning of The Priest’s Tale (not to be confused with Chaucer).

“There are secret highways in America, highways in hiding. This place stands at one of the entrance ramps leading into that network of darkside roads, and Callahan senses it. It’s in the way the Dixie cups and crumpled cigarette packs blow across the tarmac in the pre-dawn wind. It whispers from the sign on the gas pumps, the one that says PAY FOR GAS IN ADVANCE AFTER SUNDOWN. It’s in the teenage boy across the street, sitting on a porch stoop at four-thirty in the morning with his head in his arms, a silent essay in pain. The secret highways are out close, and they whisper to him.”

This bleak portrait of an American roadside gas station is an entrance to a magical realm, however it is one that is only known to broken men and women, available only to those that have fallen totally outside of society. These hidden highways do not offer refuge, or escape, or solace. The portrait above is not camouflage, it is the true measure of reality. Callahan has been broken, but he has not hit bottom. Therefore, while he senses the otherworldliness of this place, he moves on, not quite damaged enough to fall all the way through the world quite yet. 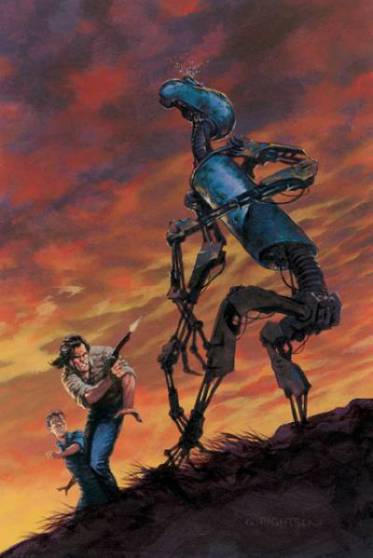 I didn’t really talk about the rest of the ka-tet or the story, but rest assured they do cool shit. Eddie is a boss.

These “darkside roads” radiate outward from The Dark Tower and throughout all the many universes, which is why Father Callahan’s account of them is necessary for the understanding of what makes them important. These roads are reflected in every scene of urban decay and suburban sprawl, and are representative of the darkness found within humanity. The weaknesses of addiction, of cowardice, and of betrayal. Such things are integral to those who travel these roads, and it is heavily implied that most who find their way into these places eventually perish. In the case of the Father, who is strong enough to overcome (with a little external help, it is true), knowledge of this frayed reality has strengthened his faith that, in the end, the room at the top of the Tower is not empty.

Jump to the rest of the series: The Gunslinger; The Drawing of the Three; The Waste Lands; Wizard and Glass; Song of Susannah; The Dark Tower