Neuromancer is a book that I like and admire a great deal, but at the same time it has a difficult time sticking to my brain. This is my third time through it, and I was struck by how little about the story I remembered. It’s as if the characters and narrative are this amorphous fog that encompass my mind while I read it, and once I’m done it just dissipates in the first strong shaft of sunlight. It’s the damnedest thing. The only thing that seems to stick around is the sense of atmosphere this book has to it. The future world Gibson imagines is, quite frankly, grimy as fuuuck. It is not a nice place to be. Cities are massive to the point of omnipresence. The super-rich live in glittering techno-towers that dwarf the surrounding cesspools of the simmering, desperate poor. Technology is paramount, but it’s used in the scuzziest ways imaginable. Tech is cheap, life is cheaper. Color is almost totally absent, and the novel plays out in shades of oppressive grey.

The world of Neuromancer, while detailed and intricate, is still, somehow, incredibly impressionistic. The concrete reality of Night City, the Sprawl, and Freeside only serve as a tangible bedrock to the swirl of senses that make up this strange, unsettling place. Check out this opening sentence: “The sky above the port was the color of television, tuned to a dead channel.” That’s so good! Seriously, that’s the one of the best opening lines I’ve read this side of The Dark Tower, praise I do not give lightly. Obviously Gibson was proud of himself, as he should be, since he sets that off in its own self-contained paragraph to open his novel with. He probably felt bad that he had to follow it up with an entire book. It even manages to age well, somehow, considering the dated nature of the reference (I mean, he obviously doesn’t mean the sky was a borderline fluorescent blue, a change I am convinced was made because the sight and sound of old-school “snow” is creepy and unsettling for esoteric reasons). What the sentence does so well is to set the tone of the novel. It uses a concrete detail, the grey sky, and make it strange and unsettling. It’s not just overcast, it’s a weird techno-gloom that manages to oppress with its emptiness, and it’s only the beginning.

The story itself, which I still totally remember, is about a young cyber cowboy, which was actually not an embarrassing thing to say in 1984. The prefix “cyber” was new and edgy and cool, I swear (in the interest of full disclosure I was five when this book came out, so I don’t really know, but according to all these glowing review-blurbs in the paperback edition, the word “cyber” was just the bee’s knees, and you can take that juxtaposition of slang and hang it on the damn wall, son). Anyway, this kid is named Case, and he’s basically a dejected criminal when we first meet him in a Japanese slum. See, he used to be a big hotshot in the world of cyberspace, zipping around the entirely incomprehensible world of data with his consciousness plugged into an unthinkable “Matrix” of the world’s information. Then a job went bad and his employers burned the ability to enter cyberspace out of his brain and left him stuck with his horrible meat body. Since then, Case has just sort of bumbled around, taking all the drugs, hustling, and trying to die.

What follows is an impressionistic whirlwind centered around Case, an awesome ninja-lady named Molly, some AI’s, and, you know, intrigue. Yet like everything else in the novel, the characters have a slippery feel to them. As if they’re not quite all there. And that’s why I think that the narrative tends to fade from my mind after a while. It’s not because the story isn’t engaging, but because the story isn’t the focus. What’s important is the atmosphere, and the impressions that this dysfunctional, horrible world make on our unprepared meat brains. 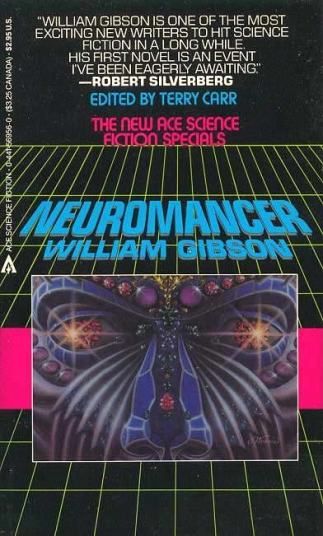 Once again, a much cooler cover than my personal copy. I’m jealous of that sick ’80s grid action.

Make no mistake, the world of Neuromancer is a dire one. While true that it isn’t an organized dystopia, this is still not necessarily a future to aspire to. Most of this is inferred, of course, considering that the novel works with esoteric atmosphere and evocative language and doesn’t necessarily spell things out for the reader. Nor should it! Yet just by some observation and a little inductive reasoning we can sense the shape of this society. The basis of this world, it would then seem, is almost unlimited urbanization. The natural world has ceased to exist, and the consequences of that development is this grim, unrelenting landscape of corporate towers, dim and crowded streets, and anonymous, sterile hotel rooms. I suppose we can assume that this state of things, in which coffin-hotels are a viable state of affairs (and are a real thing, just by the way), are caused by the sheer crush of human overpopulation. This issue, too many people, is at the root of a lot of modern apocalyptic fiction, and the assumption is that we’re a bunch of greedy sociopaths that are happy to raze communal resources to the ground so long as we get ours. Neuromancer assumes the logical endpoint of the overconsumption of natural resources, which is endless urbanization. Everything is artificial, and there is no possible way to avoid the city except by electronic means. One way to achieve this escape is through “stimsim” devices, or virtual reality. Case eschews this because it caters to the needs of the “meat body” and he’s way too cool for that shit. Instead, he opts for the matrix, and a life of pure data.

Case’s world is one where the organic is secondary to the artificial, at least insofar as the physical world is concerned. Yet the few instances where Gibson attempts to describe the actual bones on which the world is built, we see that despite the urban exterior, the machinations behind everything have taken on an artificially organic aspect of their own. Uh, I’ll explain. The core of the society that Gibson presents appear to be based on two pillars. The first is data. As we’ve come to see as aspects of Gibson’s future come to pass, information is the key to everything. In Neromancer, this vast sea of data is contained within the matrix, which is presented as something of an evolved Internet. The other pillar is the corporation. This is the human abstraction which conducts societal affairs that puts all of that data to use. Since we’re dealing with corporations and not governments, this use is entirely for the profit of those with a stake in the corporation. That’s right, not only is this book a grim revelation about overpopulation leading to the death of the natural world, but it makes a dire assumption about the endpoint of late-stage capitalism and rampant neoliberalism. And now I have to stop before I start talking about Foucault and hating myself.

Now, data and the corporation are obviously artificial constructs used for strictly human purposes, yet they are both presented as organic in nature. The very idea of data is an abstract one, so in order to describe how it can possibly be organized in any meaningful way, we’re in need of a metaphor. Gibson spends relatively little time actually describing the matrix (probably because of how abstract a concept it is, quick, what would a physical version of the Internet look like?), but when he does the descriptions are of neon cityscapes and of ice and light and orderly nonspace come up repeatedly. The data world is inorganic, and is described as such. Yet despite the aesthetic, it has all grown organically, of itself. And that’s where the AI’s come in, which is arguably the crux of the novel. The very concept of artificial intelligence is life grown from inert data. In the novel, there are two aspects of the same individual. There is Wintermute, who is the logical underpinning of the hivemind (which we’ll circle back to in a moment), and there is Neuromancer, who is the personality. At the end, Case manages to succeed in freeing this new life form from the restrictions placed upon it by cautious humans. The AI is then free to… do AI stuff? The assumption here is that a newly created lifeform based on all the world’s data is beyond our comprehension. In fact, the AI’s have no way to manifest themselves to Case other than in symbolic, natural forms. Wintermute appears as an associate of Case’s. Neuromancer creates a beach (a horrible, depressing beach at that) and Case’s dead girlfriend. In both instances, the AIs manipulate data to make the artificial organic, as they themselves are. Yet what the AI’s actually do doesn’t seem to be particularly relevant. The fear of an unrestricted artificial intelligence makes a kind of paranoid sense, but the end of the novel shows that what is essentially an alien intelligence has little interest in human affairs. That they were initially born from an abstract, artificial human construct almost seems beside the point.

That construct, the multinational corporation, is what truly shaped the world of Neuromancer. It also, in a roundabout and possibly unintentional (organic) way it also created Neuromancer, the AI. It is when speaking about the nature of corporations when Gibson sets aside esoteric language for a moment and just gets right into it:

“Power, in Case’s world, meant corporate power. The zaibatsus, the multinationals that shaped the course of human history, had transcended the old barriers. Viewed as organisms, they had attained a kind of immortality. You couldn’t kill a zaibatsu by assassinating a dozen key executives; there were others waiting to step up the ladder, assume the vacated position, access the vast banks of corporate memory.”

Further, Gibson has a sharp metaphor to use. “Phobic vision of the hatching wasps, time-lapse machine gun of biology. But weren’t the zaibatsus more like that, or the Yakuza, hives with cybernetic memories, vast single organisms, their DNA encoded in silicon?” I would happily keep quoting, since he’s just so goddamned good, but let’s wrap this up. At one point in the story, Case has a flashback to when he was a kid shacking up with a crazy girl and doing stupid teen shit. He had a rough childhood. Anyway, there’s this big old wasp nest growing on his window, so he knocks it off and then runs down to street level with a flamethrower to finish it off. Before he sets fire to it, however, he sees inside and is horrified by the nightmare geography of a wasp nest. Layer upon layer of ordered, biological yet strangely machine-like life unsettled him. This nest is what is brought up when talking about how the corporations function. The multinationals are an abstract human construction, but they took on a life of their own. As they grew, the evolved away from human concerns, not unlike the AI intelligence. However, instead of acting as an individual agent they took on the aspect of the wasp nest. The hivemind, in which the individual is irrelevant. Once the corporation rises above a certain level, its own self-preservation become more important than the humans which populate it. As the rest of the novel shows, humanity has become an afterthought.