Posted on February 2, 2016 by apocalypedia

We, a strange Russian contribution to early 20th century science fiction, is arguably the first instance of what most people would consider a dystopia. In its rawest form, a dystopia is the inverse of a utopia.  Used in this sense, I’m not talking about the boring Thomas More kind of utopia, but rather the whiz-bang science fiction kind as popularized by H.G. Wells. So, instead of everything being made totally awesome by science and progress, the dystopian vision of the future examines how technology is leveraged by a malicious power to make society super terrible for us plebs.

The specific dystopia in the novel is a society that calls itself OneState, which is led by an absolute ruler who is called The Benefactor. The citizens of this society are technically human, but they have been distorted by life in OneState. This future is presented as an endpoint of humanity, in which the species has closed in on “perfection” by mimicking machines in organization and operation. There are no individuals here. No one has a name, only a number. Everything from work to procreation is scheduled and organized according to efficiency, and everyone is happy in their role because they’re not bothered by things like feelings and the other longings of the meat body. Everyone lives in a literal bubble, which protects the society of OneState from the unknowable wilderness of the rest of Earth and allows The Benefactor mastery over how humanity evolves.

The protagonist of this tale is D-503. He is a very happy mathematician who has the distinction of building the INTEGRAL, which is spaceship designed to fly around the universe and “convince” aliens that mathematical happiness is the only true happiness. I mean, they’re Science Mormons. We then sets up a template for future dystopian fiction. D-503 soon meets a sassy woman, I-330, who repels and attracts him with her ridiculous “ideas” and “beliefs.” Once that happens, D-503 is set upon a path towards individual thought, which would be seen by the society he lives in as the beginning of a downward spiral towards base humanity. Pretty soon he’s sick with the same disease that infects I-330, which is to say, acting like a normal person. They start sneaking around and making out and eventually a world of rebels and secret police and omnipresent surveillance is revealed. Eventually chaos erupts. There is a good deal of rationalizing and fretting by the protagonist, which escalates to the imminent threat of death and brainwashing, not to mention the total collapse of society. I’m not one to give away endings in the synopsis, but suffice to say it is a bit of a bummer. Because dystopia. 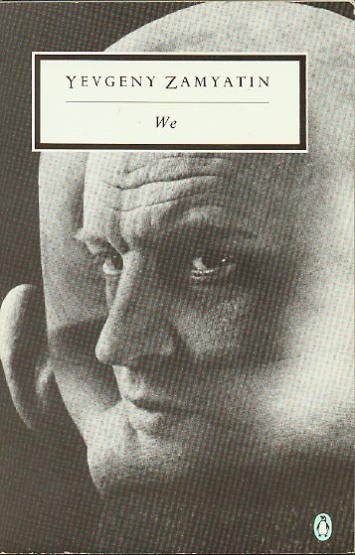 Alternate covers are fun. My personal copy is this weird fuckin’ guy.

We is a difficult work to discuss, because to be quite frank, as a work of fictional writing, it just isn’t particularly good. Yet, as a novel, it is still an important work of art. If that sounds like a confusing paradox, that’s because it is. It has always seemed to me that when presented with a work that is in The Canon (and this novel may or may not qualify, it’s complicated) the impulse is to accept that the writing involved is on another level. The truth is, there is more to literature than quality of writing. We isn’t worth studying because it’s a good read. The book isn’t terrible by any means, but the characters are flat and the world is kind of goofy for something that’s supposedly taking itself seriously. The pacing is wonky and the overall narrative is kind of meh. Now, take all that negative stuff I just said, and throw it in the garbage, because it doesn’t really matter. We is an important work. It functions sort of like an historical artifact in that the book shines a light onto the society it sprang from. It’s a unique look into a society that most of us can’t really conceptualize.

The harsh, limited world of OneState is very much a dystopia of its time, which is to say that it magnifies and hyperbolizes the fears and insecurities of post-World War I Russia looking over the smoldering wreckage of Europe and hoping that somehow Communism will provide a bulwark against the degenerate modernism of the Continent. Clearly, Zamyatin is not optimistic, and of course history vindicates his concerns. As a template for dystopian fiction and a clear reference point for other works such as Brave New World and 1984, OneState is the slippery slope endpoint for absolute State control. While Huxley focuses on the horror of eugenics and Orwell focuses on the omnipresent surveillance of a totalitarian state, Zamyatin creates his world around the mechanization of humanity along the mechanization of society. The bleak consequences this has for individuality speak for themselves.

This concept of the dystopia was born as a counter-point to a Wells-esque science utopia, in which a rapidly modernizing society is able to reach unprecedented and magnificent heights via previously unimaginable newly developed technologies. At the time ­We was conceived and written a technological rise unparalleled in human history was well underway. Machine assisted human ability moved further and faster in the sixty or so years since the Industrial Revolution (let’s call it 1850, an overly simplistic and totally imperfect date, but fuck it, close enough) than at any other point in human history. To put that into context, society went from riding around on horses and using fire to see at night to driving around in cool black sedans and lighting entire cities, all within half a human lifetime. The sheer speed of technological development was in itself a traumatic event which, prompted two primary reactions. H. G. Wells embraced it, for the most part, and reflected a society of happy, contented citizens hanging out and being cool with all their techno-gadgets and whatnot. Zamyatin looked around Russia, which is a whole other deal (seriously, we’re talking about centuries of weird European inferiority complexes and being simultaneously super powerful and super backwards) and went, “nah, it ain’t like that.” As it happens, technology is still used at the whim of humanity, and sometimes humanity sucks.

World War I put a bullet in the head of the technological utopia, at least for a while. In the aftermath of such widespread mechanized destruction (and this cannot be over-emphasized, the war was an apocalypse), a world like OneState seemed more feasible since it’s hard to contextualize that much evil without some mechanism for dehumanizing society. Citizens as numbers operating as a kind of organic social computer might, coming off the heels of unmitigated terror and bloodshed, seem like a relief. World War doesn’t happen in OneState. However, Zamyatin clearly depicts a different kind of terror, a quieter and more subtle evil, in which humanity is purged from society in an attempt to emulate technology. World War I, and much closer to home for Zamyatin, the Bolshevik Revolution, were stark reminders that violence and change often go together. Terror and heartbreak are human evils, but are necessary for any kind of progress of both society and the individual human soul. We depicts a world that has moved beyond the capacity for such self-inflicted violence. The trade-off for this physical safety, which is something that is underscored by every dystopian work of fiction since, is that humanity must sacrifice their souls. Turns out, it’s usually a bad trade.